May 09, 2011
In the details that continue to dribble out surrounding the death of terrorist Osama Bin Laden it has been reported that at least one of Bin Laden's five wives spent six years in the family compound in Abbottabad, Pakistan. That's right, six years without ever leaving the so-called fortress. 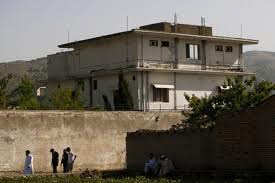 Bin Laden's little love lair in the Pakistani suburbs.
In an exclusive to nonamedufus, Amal Ahmed Abdulfattah (Mrs. OBL) says she was the one behind the fatal attack on her husband by U.S. navy seals.
dufus: What exactly are you saying?
Abdulfattah: Listen, you try competing for the attention of one man with four other wives over six years. I'd had enough.
dufus: So you plotted his death?
Abdulfattah: Well, yeah. I saw no end to it. He was unbearable. Always calling everyone around him an infidel and standing on the roof every day shouting "I'm the king of the terrorist world". And he'd park himself in front of that bloody boob tube where'd he'd watch Celebrity Apprentice over and over and over.
dufus: Oh, he liked that show?
Abdulfattah: No he wanted to blow up Trump Tower. Especially when that bitch diva Dionne Warwick was going around stabbing everyone in the back.
dufus: But there had to be more to it than that?
Abdulfattah: Oh, yes. The house was a mess. You'd think with 5 wives the place would be cleaner. But we couldn't keep up. He was always partying...24/7. He and his friend Al.
dufus: Al?
Abdulfattah: Yeah, he and his boozin' buddy Al Qaeda. Always having the gang over, whooping it up, shooting off their AK-47s in the air, playing poker with their buddies, whooping it up with dancing girls and generally just plotting the apocalypse. But the goats were the worst.
dufus: The goats?
Abdulfattah: You don't want to go there. Let's just say he and his friends were animal lovers.
dufus: And you couldn't take any more?
Abdulfattah: The worst of it was that after six years of being confined to the top two floors of the compound I, Abdulfattah, was just sittin' around getting fattah and fattah. I mean, I'd really let myself go.
dufus: And just how did it unfold?
Abdulfattah: Oh I had folds everywhere. My belly folded over my belt, my breasts were pretty saggy but worst of all I got those hamhocks under my arms and we all know how we Muslims feel about pork. Why do you look at me like that? Oh, you meant how did the plot to kill Bin Laden unfold? Sorry.
Well I just called the number placed in the want ads of the Abbottabad Almanac, our local newspaper, 1-800-USA-SEAL and the rest all fell into place.
dufus: And can you tell us what you know of the day of the actual attack?
Abdulfattah: Well, I didn't see much because I was hiding but from what I could hear things went from Abbottabad to worse. First they crashed one of their stealth helicopters. I was a little worried at that point. If you're gonna sneak up on someone you don't crash your helicopter. I mean, geez, no wonder it took them 10 years to find us. Why do they call those things stealth, anyway?
dufus: Thank you for doing this.
Abdulfattah: The world's a better place without him.
dufus: No, I mean the interview.
Abdulfattah: Oh, no problem. Say, are you married? I know of five widows that might be looking right now. 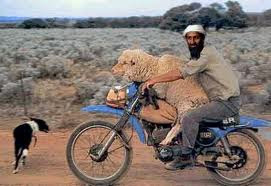 Anonymous said…
Ha! Me too. I laughed the whole way through.

nonamedufus said…
Quirks: Well, you'd get fattah and fattah after being confined for 6 years. OBL's wife is so fat that when she sits around the house she really SITS around the house!
9 May 2011 at 14:02

nonamedufus said…
00dozo: Haven't you run out of species of fish yet? You're starting to sound like that blues outfit salmon Dave. Didn't they sing Sole Man? ("Walleye have to admit" was very, very good!)
9 May 2011 at 16:45

Unknown said…
Osama was a busy man, 5 wives and nine sheep to pleasure. it;s a wonder he had anytime to plan terrorist attacks?
9 May 2011 at 20:34

http://howtobecomeacatladywithoutthecats.blogspot.com said…
Five new wives? I don't suppose Mme Dufus would be too excited about that idea. (I'm guessing they're much fattah than the current Mme D.)
9 May 2011 at 21:32

bigmikesinphilly said…
hilarious. The 'folds' reference brought back some almost-forgotten memories of a few one-night stands I'm not so proud of. Thanks for the laugh.
10 May 2011 at 14:08

00dozo said…
Hey, when you figure it out, shoot me an e-mail with distructions. I'm totally clueless on how to add Diqus (then again, I sometimes think Disqus is somehow clueless).
12 May 2011 at 14:34