Don't you love it when misguided parents drop weird names on their newborns?
For example, did you know that while former president Eisenhower's parents named him Dwight, they called him Ike. The name stuck and people called him Ike throughout his whole life. Could be worse, I suppose. They could have called him Ick. Then his 1952 presidential campaign slogan might have been "I'm sick about Ick". Or worse yet, they could have called him Uck. I'll let you work out the campaign slogan of your choice.
I remember a co-op student who worked for me once named Summer Breeze. I think her granola-induced parents must have dropped a tab before they came up with that one. Or else really liked Seals and Crofts.
Anyway, a couple in Israel wanting to demonstrate their "love" for Facebook has just named their newborn daughter...are you ready?...Like. Ya, you read right. They named their daughter Like.

What's up with that? Was her mother a Valley Girl or something? I can hear her now: "Like, fer sure, like we looked for like a name like and decided we, like, really liked Like".
And what happens when this kid grows up? She goes to school and comes across Comment and Share. I can imagine the conversation these kids have. You know how kids can be competitive. "My folks are crazier than your folks." "Oh, no they're not, my folks are crazier than yours are! And imagine the confusion when the teacher asks her students: "Now who would Like to Share a Comment?"
My real worry is if this Israeli couple has more kids. Imagine running into these people in the grocery store. "This is our first born Like. And here's her twin brothers Twit and Tweet and Status her sister." If it happened to me I'd probably say something like: "Pleased to meet you and your family. I'm Hot Male and this is my wife Yahoo and our daughters Amazon and YouTube!"
That's my status and I'm sticking to it! 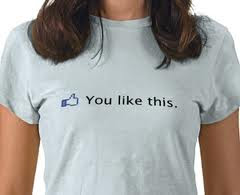 Cheryl P. said…
Now you probably have given some coo coo parents some ideas. Don't be surprised when you hear that someone named their kid "Comment" or "Share".
Although...is it really worse than Pilot Inspektor (Jason Lee's kid) or Sage Moonblood (Sly Stallone's kid) just to point out 2 of the many stranger-than-strange names.
19 May 2011 at 08:53

nonamedufus said…
No kidding. So you're telling me there's probably some PlayStation and Xbox's out there? Weird.
19 May 2011 at 10:57

nonamedufus said…
If you're talking about Richard Hatch, Dick is no mystery. What do you call a guy with no arms and no legs in a barrel of apples? Bob. Bill I have no idea. But you raise an interesting point.
19 May 2011 at 10:58

nonamedufus said…
Or Frank Zappa's kids Dweezil and Moon Unit (there was a linked reference in the post!). The parents may think it's cute but it must drive the kids nuts wen they're older.
19 May 2011 at 11:03

What about APP? Can you imagine all the puns about Where is the App for washing dishes? She took off again, didn't she?

00dozo said…
It could have been worse ... they could have named her Latke (well, it's kinda like, "Liike", no?). Or maybe it's supposed to rhyme with Nike? Or is it pike?

00dozo said…
I knew a couple who named their daughter and son, Altair and Orion respectively. Yeah, they were hippie friends of my moms. They lived on Essex St. in T.O. Go figure.

Nicky said…
I wrote a post once about the idiot who named his kid Adolf Hitler. Then there was another story about an Australian girl, not even a teen yet, who petitioned the courts for a legal name change and won. Her name? Talulah-does-the-hula-in-Hawaii. No, I'm not kidding. I think Like got off lightly, all things considered.
19 May 2011 at 21:18

Josie said…
And here I was thinking it's only us teachers who have to worry about stupid baby names. Some friends and I read the paper for the birth announcements and then pick the Stupid Baby Name of the day because one day we will have to teach these poorly named offspring. My all time favourite name is Busby Berfield. . . the name of my next dog, clearly a chocolate brown lab. . .or german shepherd. . . Ocean Rae also rates a mention. . .
Josie x
19 May 2011 at 21:59

00dozo said…
Soleil Moon Frye? Sounds like Chinese take-out to me. "Um, do you want egg-rolls with that?"

nonamedufus said…
You don't remember the TV show Punky Brewster? http://en.wikipedia.org/wiki/Soleil_Moon_Frye
Geez, I'm not sure which name is worse her real one or her TV one.
20 May 2011 at 16:09

00dozo said…
And here I thought my given name was a bit pretentious. Thank the gods my mother didn't go into acting (she doesn't do it well anyway).

Like, the name they had already branded her with wasn't bad enough?

Since I never had kids, I was not (thankfully) subjected to the mind-numbingness of adolescent sitcoms. If you think about it, the Flinstones were more educational.
20 May 2011 at 16:35

Madge said…
You think Summer Breeze is bad, I had Sunshine Baskin in my class from first grade on, there was also Ray Zin, who for the longest time I thought Raisin was his first name, and he had something else like Cookie for his last.
23 May 2011 at 18:52

Madge said…
For some reason I thought his other kids names were like John and Dave, but I googled it and they were... Moon Unit, Dweezil, Ahmet Emuukha Rodan and Diva Thin Muffin Pigeen.
23 May 2011 at 19:05

nonamedufus said…
Zappa was weird. He called his recording studio the Utility Muffin Research Kitchen.
23 May 2011 at 19:10