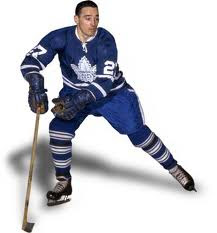 One upon a time in the little suburb of Toronto known as Scarborough lived an 8 year-old who loved hockey. Back in the late 50s/early 60s, of course, the National Hockey League consisted of only 6 teams. Thanks to a magical electronic box in the corner of his living room little Noname would, from time to time, be allowed to stay up late and watch his revered Maple Leafs - hazy little black and white figures - skate from one end of the ice to the other and, more often than not, slam home a little black puck into their opponent's net.
His heroes included goalie Johnny Bower and players Bobby Baun, Tim Horton, Eddie Shack, Bob Pulford, George Armstrong, Red Kelly, Dave Keon and his very favourite Frank Mahovlich.
So taken was Noname with the Maple Leafs that he played street hockey with his friends every chance he got and his Dad would walk with him to the arena in winter where he played little league hockey. He played various positions. He played wing where he checked an opposing player into the boards after the whistle. The player's mom yelled at the ref about the bully who should get a penalty. Bully? Hell, Noname could hardly keep his skates upright. Let the poor guy have a little fun. Next up was goalie where Noname would spend half-an-hour before each game suiting up in pads that were bigger than he was. In spite of those huge pads he rarely stopped a puck, seeing how he couldn't get up enough momentum to move and then if he did he couldn't stop. Noname was a well-rounded player in that he pretty much sucked at every position except "bench". But he loved the game. And he loved his Maple Leafs. And he loved Frank Mahovlich.
One day Noname went shopping to Loblaws with his Mom at the nearby Golden Mile shopping plaza. As his mother was proceeding through the checkout Noname looked outside and guess what he saw? Frank Mahovolich was sitting on a bench outside the grocery store wearing his #27 Maple Leaf leather jacket. "Mom, Mom" said Noname "Quick, have you got a pencil and a paper?" And like all Mothers she had just what he needed in that purse of hers. He tore out of the store, ran up to Frank and stammered, "Um, ah, Mr. Mahovlich, could I have your autograph? I'm a really big fan and I watch you play all the time."
But the stars were not aligned that day. Frank opened his mouth and said "Oh, I'm not Frank. I'm his little brother Peter. I'm just wearing Frank's jacket."
"Peter?" he thought. "Hell, I've never even heard of him." Totally dejected, his arms dropped to his sides and he slowly turned and walked away. Little did he know that 3 years later Peter would be drafted by the Red Wing organization 2nd overall in the amateur draft and end up winning 4 Stanley Cups with the Montreal Canadiens, where - guess what - he ended up playing several seasons with big brother Frank. 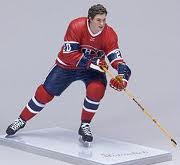 Today, Frank's a Senator in the Parliament of Canada. Peter's a scout for the Florida Panthers and Noname never did get either brother's autograph.

nonamedufus said…
Back in those days we had Coke in glass bottles. But sadly my mom didn't say "Here, have a Coke". I did get the autograph of another Leaf, Dick Duff, when he came to our Boy Cubs banquet. But he wasn't Frank, though.
30 May 2011 at 15:30

00dozo said…
Oh, I loved Eddie Shack - he was quite the clown. Keon was one of my favs, too! My stepdad had season tickets forever at Maple Leaf Gardens, just left of centre ice, and in the first row of the blue section (before it became the red section).
;-)

I remember going to one game in the mid 80's - I think it was Toronto against Montreal - but saw Lanny McDonald, the infamous hero of the Canada-Russia series (really, how could one miss that moustache); he sat a few rows below us. And Alan Eagleson was also at the same game - he sat in the row right in front of us, two seats to the right. My then boyfriend wanted to spit on him.

nonamedufus said…
Your then boyfriend should have spit on Eagleson. I actually interviewed him back in the 80s - before people found out what a crook he was.

00dozo said…
Yep - Eagleson was a real dickhead. I'm sure my boyfriend would have spit on him if there weren't so many witnesses (and because of our seats, we - or he - was likely to be spotted on camera). Mind you, it would have made great fodder for Cherry.
;-)

Your mom taught the ditty, "Clear the Track"?? I take it Eddie visited her school often?

nonamedufus said…
Seems Eddie wasn't the sharpest knife in the drawer. Surprise, surprise.
30 May 2011 at 20:06

Canadian Blend said…
I had one of Tim Horton's donuts this morning. I don't know what kind of hockey player he was, but I do know he makes a mean chocolate glazed.
31 May 2011 at 10:54

nonamedufus said…
Horton died in 1974 when he flipped his Pantera driving from Toronto to Buffalo. He apparently had twice the legal limit of alcohol in his system and was driving at over 100 mph. His partner bought his family's shares in Tim Horton's from his widow but years later his daughter married his partner's son returning the Horton family to the company.

My complaint with Tim Horton's is they don't make their donuts on site any more. While the sign outside says "always fresh" They make the donuts centrally and ship them frozen to local stores.
31 May 2011 at 13:33

Linda Medrano said…
Reading this made me sad. I wish you had gotten an autograph. I also love little boys so much. Those little turned up hopeful faces! Girls are tricky, but boys are just so sweet!
31 May 2011 at 17:16

Nicky said…
Was this post inspired by the news of (yet) another team being added to the league? In any case, this was a lovely piece NoName. Really sweet.
31 May 2011 at 19:41

nonamedufus said…
And I was pretty damn cute, too. People thought I looked like Van Johnson! At that point in time I had no idea who Van Johnson was. Well at least I was better looking than Pete "Little 'M'" Mahovlich!
31 May 2011 at 20:48

Linda Medrano said…
You are still pretty damn cute. I know who Van Johnson is, but you have more charisma than he did. Know what I mean?
31 May 2011 at 21:10

Linda R. said…
Aw, sorry you didn't get an autograph. Great story about a childhood memory. I actually went to a hockey game when our city had a team - many years ago. I think they were called the Polar Twins.
1 June 2011 at 16:08

nonamedufus said…
The Winston-Salem Polar Twins? The team that folded twice? The second time after one year? Poor you. Get any autographs?
1 June 2011 at 16:49

Linda R. said…
Nope, no autographs. Guess it's just as well I never evolved into a fan given our lack of ability to hold on to a team. A neighbor worked there part time, and got us in, so it was just a one-time thing.
1 June 2011 at 16:52

nonamedufus said…
We've got the Senators in Ottawa. I go from time to time. The atmosphere's great at a live hockey game. Now if only they could win games...
1 June 2011 at 16:59