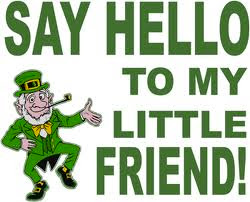 Faith and begorrah it's bloody Saint Paddy's day! And not unlike St.Patrick driving the snakes from Ireland - after which many of them settled in New York City and Boston and became politicians, I understand - Humor Bloggers Dot Com is driving all you little people to its St. Paddy's Day Humor Carnival.
Although I hail from strong Irish stock on both my mother's and father's side of our family, I sometimes wonder about the Irish. Like, why are they always eating stew, drinking green beer and marching in parades? I mean, what's up with that?
And their folklore! Leprechauns! Hah, they couldn't come up with a better mythological character than one most folks look down on? Well, they have to, don't they. They're only two and-a-half feet tall.
Little old men dressed in green who spend all their time making shoes, playing tricks, prancing through the forest and counting their money in pots of gold at the end of some rainbow.
C'mon. Is that a manly cultural icon? Even their soap is more manly. Yes, and women like it too.
And they drink copious amounts of something that looks and tastes like 10W30 motor oil called Guinness. No wonder they're little. They've stunted their growth. This of course diminishes, among other things, their job opportunities. I mean who's going to employ some little drunk? What are they good for? They just don't measure up.
And of course if Leprechauns drink too much Guinness they more often than not become Lepre-cants. In such cases they've been known to come up a little short. Their women folk have come to call it the Leprechaun Limp.
Some have found fame in the movies but usually just in shorts. Others have been lucky to step up into larger but nevertheless limited roles such as members of The Lollipop Guild or as Oompa Loompas. 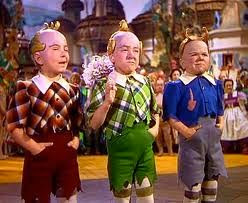 The odd leprechaun - and some of the even ones - has found happiness as sports team mascots but they tire quickly running up and down the sidelines on their tiny little legs.
Then, of course, there's the most famous among them who runs around saying "They're magically delicious"!
Personally, I wouldn't know.
I've never eaten one.

http://howtobecomeacatladywithoutthecats.blogspot.com said…
I've never eaten one, either. But I do enjoy watching them try to cross the Giant's Causeway, trying to escape.
17 March 2011 at 07:26

Anonymous said…
Awww... I loves me some Ooompah Loompahs....and...

I loves me some Lollipop Guilders too!

In another life, I was a little person. In this life, I'm a person with a little mind.

nonamedufus said…
Boom Boom: You learn something every day around here. I thought you were talking about tiny NY football fans until I looked up Giant's Causeway on Wikipedia. Happy St Paddy's day Ms Larew.
17 March 2011 at 08:51

Anonymous said…
I'm with you on the Guinness.

For some reason, my wife loves the stuff. I guess I don't have enough Irish in me to have "acquired" the taste.

LOTGK said…
One thing about the Leprechaun though. Their cobbler skils must be fierce for they all have a pot "O" gold they be hiding at the end of a rainbow.
17 March 2011 at 15:27

nonamedufus said…
LOTGK: A pot of gold from making shoes? That's certainly starting off on the right foot.
17 March 2011 at 17:13

Janna said…
I suspect it's probably better to eat stew and drink green beer than the alternative...
... which is drinking green stew and eating beer.

00dozo said…
At the risk of repeating myself (yeah, it's been a rather confusing day for me and I hadn't had a drink yet - earlier, I mean), Guinness is all the rage down here. I just don't get it, even though I do like dark ale, Guinness makes me gag!

nonamedufus said…
Janna: Green stew. Is that what you found at the back of your old fridge? We have a fridge in the basement with a few green things in it that have ben there a while. Should have got them out for St. Paddy's day.
17 March 2011 at 19:36

Nicky said…
I thought leprechauns lived in hollowed trees and made cookies. Huh. If not them, who? I'm all about the cookies.
18 March 2011 at 06:03

nonamedufus said…
brookeamanda: You know if you drink enough of it the beer doesn't need to be green for you to feel green.
18 March 2011 at 08:51

Linda Medrano said…
I would love to catch one and keep it in a little cage. I think that would be wonderfully fun. Yes, I'm twisted like that.
18 March 2011 at 15:03

nonamedufus said…
meleah rebeccah: And to you. Did you catch any leprechauns yesterday?
18 March 2011 at 16:51

nonamedufus said…
Linda: Yeah, you'd probably want it to make you lots of shoes. Would you take it for a walk every once and awhile?
18 March 2011 at 16:52