Is There A Spring In My Step? 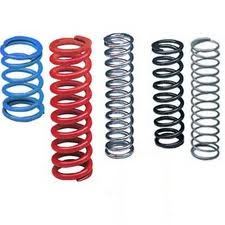 So did you notice? What you didn't see it? Feel it? Oh man, I did. I've been waiting three months for it. After all that time of waking up and going to bed in the dark. Of shovelling snow, bundling up, wearing a toque (I'm Canadian, eh), boots and gloves. It's about time things changed around here. I'm talking about Spring, y'all. Yeah, it arrived Sunday - 7:21pm eastern daylight time. But who's counting?
You may not know this but there's a considerable family tree associated with Spring. It all started when Sappy Spring married Pulla Forward and they had two children Fall and Back. They've all since been immortalized in that phrase down through the years "Spring Forward, Fall Back".
And their children's children, and their children's children, were quite the inventive family. First there was Samuel "Coil" Spring. What did he do? Well, hey, how would we sleep soundly or make bouncy-bouncy without bed springs?
Sam's brother, Stem, handily competed with his sibling with his own invention. Like, we couldn't tell time without watch springs.
Sister, Irish, cleaned up in the personal hygiene field.
Cousin Wolfgang, a musician, was only two-steps behind. And who can sit still during a Spring Waltz, huh?
And of course Wolfgang's son, Bruce, a mere adolescent and born in the USA, became well known as Spring's teen.
Bruce's brother Slinky bounced around in the toy industry for a few years, amassing a small fortune after turning a spring, a spring into a marvellous thing. Calling himself Richard James, he tried to disassociate himself from his famous family, seeing if he could make a name for himself. But, despite his best efforts, everyone knew it was Slinky. 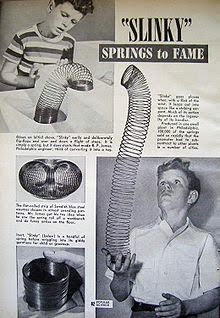 Of course, the achievements of the Spring family can likely be traced all the way back to Sappy's mother, Birdie, who made a name for herself as a turkey farmer. People who admired Birdie often said she was no spring chicken.
And Birdie's husband "Jumpy" was famous in his own right after he invented the diving board. That's right, I guess you could say Jumpy was the spring board for the rest of his family's spring fever.
This post first appeared at The Parody Files. Then it rebounded over here.

Donnie said…
Very well done. You must think before you write... Oh, and you spell "y'all" like a true southerner. Don't forget to hold onto that snow shovel for awhile longer though 'cause I gotta a feelin' that your springs may be sprung in a couple of weeks.
24 March 2011 at 09:04

http://howtobecomeacatladywithoutthecats.blogspot.com said…
So, why the hell am I still shoveling? The Spring family has a lot to answer for...
24 March 2011 at 09:22

nonamedufus said…
Boom Boom: Yeah, they were never too good at reading the calendar, unfortunately.
24 March 2011 at 09:26

Kelly said…
The Spring Family and Friends have yet to make an appearance in my neighborhood. Instead, we're getting the Opening Act of Rain and Lots of It.
24 March 2011 at 09:36

nonamedufus said…
Kelly: Rain is like the black sheep of the Spring Family, isn't it. Although we could use some here to melt the snow that's still lying around.
24 March 2011 at 10:13

IWASNTBLOGGEDYESTERDAY said…
I want to comment but nothing springs to mind :)
24 March 2011 at 11:16

Anonymous said…
A slinky. A slinky.
It's such a wonderful toy!

I'm glad you finally got Spring Back erm, I mean Forward. Wait. Is that Back of Forward? I'm so confused!

nonamedufus said…
Quirks: If there were really a spring in my step I think I'd squeak when I walked...back or forward. Of course if I walked back there'd be a kaeuqs in my step.
24 March 2011 at 13:24

injaynesworld said…
Well, this put a spring in my step but, alas, that's the only place is seems to be appearing. Trying very hard to kick Winter's butt to the curb here, but he is a stubborn old dude.

nonamedufus said…
Jayne: See, for us north of the 49th the terms "cold" and "California" sound mutually exclusive. Nice to hear you share our pain.
24 March 2011 at 22:23

cardiogirl said…
That Spring family is so unreliable in my area. They never show up on time and frequently they show up and then leave before the party can really get started.

nonamedufus said…
cardiogirl: Same here. Since Spring arrived it's only gotten colder here. What's up with that.
27 March 2011 at 08:45

cardiogirl said…
That Spring family is so unreliable in my area. They never show up on time and frequently they show up and then leave before the party can really get started.