March 28, 2011
On the weekend they called an election in Canada.
*sighs*
You know we're kinda screwed up in this country when it comes to federal politics. For example, the longest serving federal leader is Bloc Quebecois leader Gilles Duceppe, a dyed-in-the-wool separatist bent on sovereignty for Quebec while at the same time having no qualms about collecting a federal salary for the last 21 years.
Liberal leader Michael Ignatieff returned from years in exile in Great Britain and the States where he was an academic and journalist to run for the Liberal leadership. In their million dollar pre-election attack ads, the Conservatives sum up his sense of purpose with the line "Ignatieff. he didn't come back for you".
And poor New Democrat Party leader Jack Layton has just had hip surgery. We're waiting for the first campaign reference from one of his opponents that he doesn't have a leg to stand on.
I know I'm going out on a limb here (no pun intended, Jack) writing about politics on a humour blog but here in the Great White North when all is said and done there's nothing else to do but laugh. If the media and the politicians are to be believed our nation is populated by a majority of bald people, having pulled their hair out over an election that we're told nobody wants.
Pollster Daryll Bricker of Ipsos Reid went so far as to refer to this as a Seinfeld election, to wit: an election about nothing.
Our nation normally goes to the polls between every four and five years. However, in recent years we can't seem to get past electing minority governments so this will be the fourth trip to the ballot box in the last seven years. Canadians used to complain about the weather and public transportation. We can now add elections to that list.
But here's where I differ from my toque-tipping fellow Canucks. I want an election. Bring it on I say. I'm sick and tired of a government that undertakes questionable actions I never supported. And it's taken to calling itself the Harper Government, not the Government of Canada. Hey, I want a government that represents me and my fellow Canadians, not just the interests of the Prime Minister. What's next? Do they rename Parliament Hill Harper Hill. Change Oh, Canada to Harperland, We Stand On Guard For Thee?
And, of late, this government been embroiled in one scandal after another including one involving the illegal lobbying activities of a former Prime Ministerial advisor and his forty year younger former call girl fiance. Hell, who knew Canadian politics was such a hot bed of sex and intrigue. Who knew it was a hot bed, period.
The minority government was defeated last week following the introduction of it's latest budget. But the budget wasn't the cause of their defeat. Before Parliament moved on a money vote it first dealt with an Opposition motion that the Government was in contempt of Parliament. The motion passed - the first time a sitting government has ever been found to be in contempt of Parliament.
And throughout all this, and what I'm most exasperated by, is a party hanging on to power through the threat of that great bogeyman: a "coalition". The existing minority government would have Canadians believe that the alternative to them would be an evil coalition government of the remaining parties.
Uh-huh. Seems to have worked out alright for Australia and Great Britain. And what did George Bush call his anti-Saddam friends? A coalition of the willing. Okay, well two out of three ain't bad.
So let's see where we stand.
Politicians and media say this is an election nobody wants.
Pollsters say the election will be about nothing.
The sitting government is being sucked into numerous scandals faster than Br'er Rabbit by Tar Baby.
The government says the alternative is that nasty coalition.
But the issue of a coalition is a deflection, a political jab in the ongoing thrusts and parries of political gamesmanship, a red herring.
And the sooner Canadians realize this and cool to this rhetoric the sooner we'll have a coalition of the chilling and be able to concentrate on the real issues.
I hope.
If not, we can always have an election on the leaders' sartorial choices. 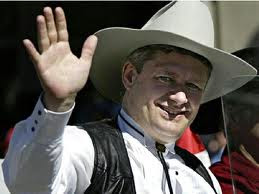 Ignatieff, he got dressed up for you. 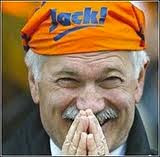 http://howtobecomeacatladywithoutthecats.blogspot.com said…
Wait... they have elections filled with scandal in Canada? And here I was thinking you were all so civilized. And so stylish... what's with those chapeaux?

laughingmom said…
I thought Canadians settled their differences in the ice hockey rink.
28 March 2011 at 08:48

nonamedufus said…
laughingmom: No, that's another "c" word: concussion! Our politicians couldn't give each other one of those. They're already brain dead.
28 March 2011 at 10:24

Anonymous said…
An election? I thought the world was stopping to watch the upcoming nuptials of Kate and William!

Isn't he going to be your King someday? And she your Queen?

Is it time for a history primer for moi?

injaynesworld said…
I had read that Harper was trying to build up your military again. Welcome to the U.S. money pit. You got rid of him none too soon. Besides, who the hell attacks Canada?

Jaffer said…
I remember the day when harper was first elected (after the fall of Paul Martin). I believed then to give him a fair chance to live as PM.

It's high time he went. But I wouldn't even know if I'd like to vote Red or Orange.

nonamedufus said…
Jayne: Got rid of him? His party's leading in the polls! Stupid Canadians. Present company excluded, of course.
28 March 2011 at 14:19

nonamedufus said…
Jaffer: Yeah, Canadian roulette. That's when all the chambers are empty, right?
28 March 2011 at 14:20

00dozo said…
Ha! I don't envy you one iota in the upcoming days (weeks? months?), but this article is dead on.

I'd probably vote for Jack, mostly because he has the best smile and has a good sense of humour.

Ignatieff - well, I don't know much about him but he can probably speak out of the side of his mouth just as good as Chretien did.

Duceppe? Vote for a guy who wears a condom on his head?

And Harper - he's to blame for all this crap. By the way, you do know what 'PC' stands for, don't you? Penis Craniums.

mike said…
Well said! But it's like you mentioned in one of your comments: the C's are leading in the polls. I have a feeling this is going to be a big waste of money (duh), and we'll end up where we started.
28 March 2011 at 23:36

A while back the governor of Texas was making noise about seceding from the US. Not long after that he made some noise about needing more federal dollars for his state.

nonamedufus said…
Cdn Blend: You want to know something? While Duceppe represents a party bent on breaking Canada up, that aside, he often makes the most sense of all the leaders. Ironic.
29 March 2011 at 09:36

Leeuna said…
It seems that Canada is suffering from the dreaded Electile Dysfunction that plagues us here in the states all the time.
30 March 2011 at 07:44

Unknown said…
They have elections in Canada? They have scandals in Canada? Stupid American media is keeping us out of the juicy loop! Unfair!
30 March 2011 at 19:45

injaynesworld said…
I had read that Harper was trying to build up your military again. Welcome to the U.S. money pit. You got rid of him none too soon. Besides, who the hell attacks Canada?

Quirkyloon said…
An election? I thought the world was stopping to watch the upcoming nuptials of Kate and William!

Isn't he going to be your King someday? And she your Queen?

Is it time for a history primer for moi?