August 06, 2009
Hey, don't forget to stop by my caption contest - Pause, Ponder and Pun - and leave a caption. You might win exciting prizes. Well, no prizes really but significant web cred to have been awarded the I Be Hangin' With Dufus citation. Oh yeah, baby!
Meanwhile on with today's post...


Couldn't watch it all, could you? But I digress...


I thought the Catholic Church ran out of feet to stand on a long time ago. But apparently it has as many feet as a centipede because it has just stuck another one in it's mouth. Westminster Archbishop Vincent Nichols, the top guy of all Catholics in England and Wales, was quoted last week as saying he "is worried that teenagers are developing "transient" relationships on the internet and he warns the collapse of the friendships could leave young people feeling suicidal".

The Archbishop (Why do they call them that? To my lapsed-Catholic sensibilities it sounds like something not far from arch-villain"!) went on to say: "I think there's a worry that an excessive use, or an almost exclusive use of text and emails means that as a society we're losing some of the ability to build interpersonal communication that's necessary for living together and building a community."

This from a leader of an outfit that scarred me for life with it's Baltimore Catechism of the 50s that taught me - complete with idiotic "artist renderings" that prayer was a phone call to God. 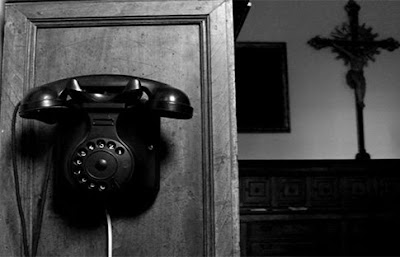 If you ask me, the Catholic Church, who has turned away more worshippers than it has attracted, should instead of dissing the technology be embracing it. Why not use the technology to their benefit to attract young people to the church.


Of course they may have to change their ideas on birth control, celibate priests and gay marriage first.

John J Savo said…
Doesn't the Catholic Church realize that they're committing their own form of ritual suicide with their ritual stupidity?
6 August 2009 at 09:41

Unknown said…
The Catholic church are getting it wrong. Jesus would have loved Twitter. He often kept his words of wisdom under 140 characters.

nonamedufus said…
John: I shake my head everytime they open their mouths to speak.

Donnie said…
I'm still trying to figure out what
Catholics had against Martin Luther.

I do know that I'm not too damned keen on a religious group that sees Jesus' face in toast and slimy water stains on roads.

nonamedufus said…
Don: There was this little thing called the Reformation.
6 August 2009 at 19:49

Anonymous said…
I think it would be a grand idea for the Pope to have a Twitter account. this way he could see just how many followers the Catholic church had. And he could bless millions of people with one single click.
10 August 2009 at 11:41