August 03, 2009
I know I'm getting old but am I getting stupid? That may be a rhetorical question but nevertheless I used to pride myself on how I kept up to speed on politics in the States and Canada. Things started to unravel, though, when I noticed I couldn't keep up with the vocabulary being used primarily in American politics. No, I'm not talking about the unkind adjectives associated with Alaska's chief exported embarrassment, former Governor and Republican Vice-Presidential skirt wearing, soccer-mom running mate para-sailing, er, um Sarah Palin.
It's like the early stages of Alzheimer's, you know: Somes heimer's. And the onset began with the Swift Boat controversy during the 2004 American Presidential election. "Swift boat - now what kind of controversy is that?" I thought at the time. Well it turned out it was a term used by the media to describe a group of Vietnam swift boat veterans publicly questioning John Kerry's military record. Huh? Go figure. Its not like he stole one. Or drove it too fast. The boat wasn't the controversy, the veterans were. And in the end, serve them right, it was the media who suffered the casualty. Well apart from Kerry losing the election. The the media whipped itself into such a frenzy that when all was said and done, in the tit-for-tat of modern politics, Dan Rather was fired from CBS for reporting on unsubstantiated memos concerning George Bush's National Guard duty. 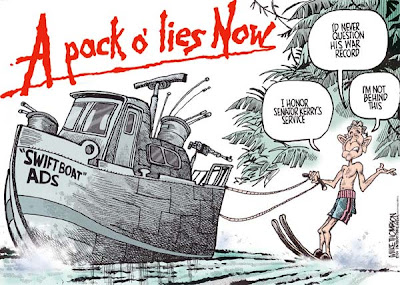 The next curve came when the media got hold of the tea bag protests or "tea-baggers" issue. Now apart from having some with lemon or milk in a cup, I didn't even know there was an oral sex connotation until after weeks of hearing about it I finally looked it up. What? Obama's into oral sex? WTF? Turns out the term hearkens back to the Boston Tea Party and was used to describe demonstrations against President Obama, his budget and his stimulus package. Until I realized what the media term really meant I was very confused thinking Obama had turned into some kind of pervert looking to tea bag his stimulus package. 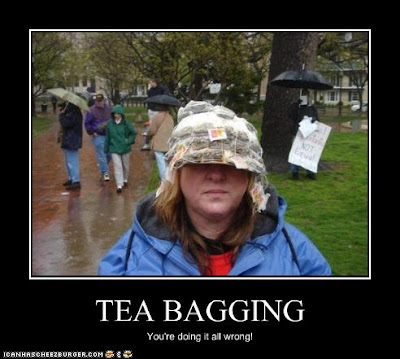 And now the latest media term for a political controversy is "birthers". Eh? Is the government against mid wives? Is this a pro-choice issue? Again, what gives? Turns out its a media term to describe the controversy involving certain factions on the right of the political spectrum - birthers - who maintain there is a 48-year-old conspiracy afoot to have a native born Kenyan infiltrate the White House even though newspaper announcements and a birth certificate prove beyond a doubt that Obama is not a native Kenyan but born in Hawaii. As a blonde Hawaiian would say: Aloha! 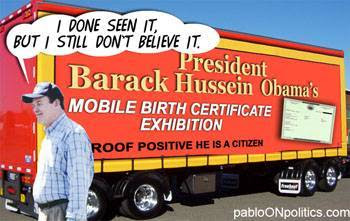 Man, when our children ask us what where the major political issues of the first decade of the 21st century what will they think when we tell them "swift-boaters, tea-baggers and birthers"?
Here in Canada, our political controversies - what political controversies - pale by comparison. But, like the Americans, they can also be summed up in one word (hey, hyphenated is one word): boring. Well, there was that one time... 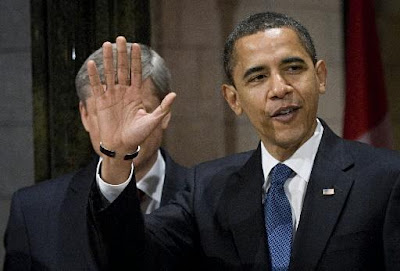 Unfinished Rambler said…
Birthers? I knew those folks were out there, but didn't realize they had a label. As a Democrat, of course, I can think of many other labels for these folks, some ending with "ers" also. ;)

Anonymous said…
Ha! Great photo! That Prez he is a picture hog, ain't he?

Quirky: I thought it was hilarious. Speaks volumes about the relationship between Canada and the U.S.
3 August 2009 at 19:50

Canadian Blend said…
The guy with Obama is Harper? You guys need to elect someone with a bigger head.
5 August 2009 at 12:07

nonamedufus said…
Cdn Blend: The guy thinks so much of himself he can hardly get it thru the doorway now.
5 August 2009 at 13:02

Quirkyloon said…
Ha! Great photo! That Prez he is a picture hog, ain't he?