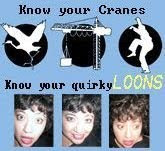 One of the funniest bloggers in all of blogdom has got to be Quirky Loon. She writes about zombies and other meaningful musings and sometimes she and I trade obscure rock and roll lyrics. Late last week she did a hilarious take off on Ice Ice Baby called Zom-bie Baby. I figured the best way to let her know what I thought of it was to return the favour. So, with apologies to Rick James, here's my homage to Super Quirk...

She will never let your spirits down

Once she comments on your blog, ow girl

She likes the boys on the blogs

She says that I'm her all-time favorite

That girl is pretty wild now

The girl's a super Quirk

The kind of girl you you read about

That girl is pretty Quirky

The girl's a super Quirk

I really love to read her

That girl's alright with me, yeah

The kind of Quirk you want to know

From zombie brain down to her toenails

Down to her feet, yeah

And she'll write to me on my blog with her comments

In a line or two

Going back to Quirky Loon

Three's not a crowd to her, she says

When I get there she's got zombies, jokes and musings

Thank you so much!

AND you did GREAT!!!! Really! That was fantastic!

I couldn't stop smiling or laughing through the whole thing!

Thanks again NoName! That was too much!

Donnie said…
Sweeeeet! Just thankful she's not like Cyndi Lauper or worse yet, Rick James himself!
24 August 2009 at 10:54

Unknown said…
what a wonderful parody for a very wonderful blogger! She is a Super Quirk and I am proud to be one of her long time followers! You ROCK for doing this for her, it really helped cheer her up
24 August 2009 at 12:51

nonamedufus said…
Skye: I kneel at the feet of the Quirky master.

Quirks: So you like the homage oh great one? I'm glad. Take good care of yourself.

Don: She's none of those. She's Super Quirk.

Dizzblnd: Hey, I'm glad I was able to bring a smile to the Quirkster. She's the best.

subtorp77: That's why I used it. It's been running around my brain since I saw that stupid VISA commercial. But it's the perfect song for her 'cause she's a Quirk, a super Quirk, man!
24 August 2009 at 15:14

Anonymous said…
Quirk is indeed the shiznit. You pay her perfect homage.
And am I the only one who sees the little girl from Lil Miss Sunshine doing her wildly innappropriate dance at the pageant every time this song gets mentions (or, in this case, delightfully rewritten)?
Love it!
24 August 2009 at 17:34