All Right Mr. DeMille I'm Ready For My Close Up

Gloria Swanson really gave it her all to play fading (in fact she had totally faded) film star Nora Desmond in that great cinematic classic Sunset Boulevard. One of the lines I loved was "I am big, It's the pictures that got small." Her character was kinda creepy. And I think she would have benefited from a make-over.

What about this blog? You think it could use a make-over? The folks over at Tribal Blogs are holding a blog make-over contest.

Meh, I thought when I first heard of it. What did Old McDonald say? You know, the guy with a farm?   Oh, yeah: "You can put lipstick on a pig, but it's still a pig. And if he goes wee wee wee all the way home he should have gone before he left."

But as I got to thinking about it I thought to myself "Hey, everybody loves bacon. What have I got to lose?"

I also got a little confused between the terms "make-up" and "make-over". I've never worn make-up but I thought, hey, for $300 worth of goodies I might go so far as to get a brazil wax.

I mean for heaven's sake, take a look around this blog. The layout is...well...blahhhh. Yeah, sure, it's clean and uncluttered - which is good - but, hell, it reeks of antiseptic...or antidepressants, or antioxidants, or antiperspirants - well which is what you need if it reeks, right?

This is a humour blog for Pete's sake. And that layout doesn't inspire much mirth. (Mirth means gladness or gaiety usually expressed by laughter. I used it because it's a nice alliteration with "much". And I really didn't want to say "gobs of gaiety".)

You can gaze upon the $300 prize package here.

Among the prizes are custom graphics which include something called a favicon. Gee, I didn't know Milli Vanilli had reunited.

An installation of five key plug-ins is included. That would come in really handy 'cause I'm redoing my kitchen and the more plug-ins the better.

And they're offering something called a premium SEO submission. I don't know what that means but I kinda like Lionel Richie. You know, he sang "Say You, Say Me, SEO" Isn't that how it went?

So wish me luck. This blog may soon be wearing lipstick. 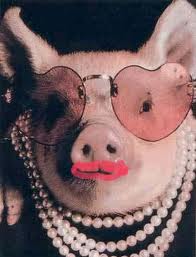 Boom Boom Larew said…
Dang! How am I supposed to compete for the Tribal Blogs makeover now? I guess I'll just have to settle for stealing the pig pic for my new avatar.
15 September 2011 at 08:12

quirkyloon said…
HA! I'm proud of you Nomesters! You resisted a dig at Sarah Palin. Yep, you did. Soooooo-weeeee!

HA! And good luck with the makeover. Personally, I really LIKE the clean and uncluttered look. Some blogs are stimulus overload for me and I'm thinking, okay I'm here, so WHERE do I go now? hee hee

But I also understand the need for change. I've been known to do that a time or two, or three. hee hee

Good luck! And I hope you win!

nonamedufus said…
Hey, accidents will happen. I hope you found enough of interest that convince you to come back. Where else you gonna see lipstick on a pig?
15 September 2011 at 09:26

nonamedufus said…
Yeah that was the last time that expression got traction. But who wants a blog that looks like Sarah Palin? I hope I win, Quirks! This is the real thing . It's no pig in a poke.
15 September 2011 at 09:33

Nicky said…
I would wish you luck, but we are entering this contest too. It would seem, my used-to-be friend, you have become the enemy...

http://howtobecomeacatladywithoutthecats.blogspot.com said…
I'm looking for a new sty'le to complement the sty'le of my home.
15 September 2011 at 19:56

LOTGK said…
Alas, I am quite busy assisting guarding our Alaskan border from the Russians.
15 September 2011 at 22:05

nonamedufus said…
Thank you Sarah I see you're so busy you forget to apply your lipstick today.
16 September 2011 at 07:29

meleahrebeccah said…
this blog would look FANTASTIC in the right shade of Lipstick!
16 September 2011 at 14:40

nonamedufus said…
I was thinking of something in a mauve sparkly, gloss kind of thing. What do you think?
16 September 2011 at 15:53

nonamedufus said…
In your ear with a can of beer, dear. Wait a minute. That'd be a colossal waste of beer. Um, on your shoulder with a can opener? Just doesn't have the same impact, does it.
16 September 2011 at 23:07

Linda Medrano said…
Winner! Winner! Chicken Dinner! This post is so good it's almost a shooo in. But now we need to see what that gorgeous, glamorous, and giddy Cheese Crew does!
19 September 2011 at 12:12

nonamedufus said…
Linda, you don't need to see the "Empress in her head's" submission again. Like the Titanic she's going down. And thanks for the vote of confidence.
19 September 2011 at 12:28

Madge said…
Whatever you do, DO NOT, I REPEAT... DO NOT GET THE BRAZILIAN, I admit it might make Little Dufus look a little less, well, um little, but that is a pain compared to no other. Spare yourself first.
19 September 2011 at 20:25

nonamedufus said…
Listen, if it will help me win this contest I'll not only wax Brazil but all of South America. (That was not a euphemism.)
20 September 2011 at 15:44

Mikewj said…
Great post. But I'm still torn between voting for you and the chick in the pink sundress with the phone card and the baby oil. It's not personal.
22 September 2011 at 11:22

nonamedufus said…
I get it. She's a girl. Can't say I really rock it in a pink sundress despite my exhortations to the contrary. Alas, you saw through me. (Well of course you did. That dress leaves precious little to the imagination.)
22 September 2011 at 11:36