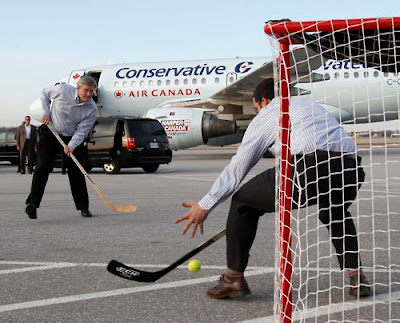 PM Harper warms up for debate.
I don't know what it is about us Canadians but we make it so easy for others to laugh at us. Is it our love of Tim Horton's coffee and donuts? What about that elegant gooey gourmet gloop of cheese curds, gravy and fries known as poutine? Could it be because our country is where the sport of hockey was born but we have precious few of our teams in the playoffs? Or maybe it's because our Prime Minister acts so damn presidential.
During the current election campaign - oh, yeah, we're having an election here. Have you heard? Probably not. Stop me if this sounds familiar - our President, er, ah, Prime Minister has been accused of running a tightly controlled campaign from a bubble, tossing out "undesirables" from rally stops and limiting media questions to only 4 or 5 per event. His government is plagued by scandals, has been accused of misleading Parliament and Canadians and even Canadians snicker at him calling his party the Harper Government as opposed to maybe the Conservative Government or better yet the Government of Canada. And yet, he and his party lead in the polls. Go figure.
Every campaign has a leaders' debate. Ours was last Tuesday. That is to say the English language debate was last Tuesday. It was meh. There's 2 hours of my life I'll never get back. The French debate, originally scheduled for last Thursday was moved to Wednesday night. Why? Well the Montreal Canadians were facing off against the Boston Bruins in their round 1 playoff opener Thursday. (Montreal won!) God forbid Canadians should choose between the two. I'm not kidding. In Canada hockey trumps politics.
I think if our 4 political leaders were worried about people tuning into them they should have combined the two events. A few hip-checks, some high-sticking, two-on-twos and a concussion or two might really have held the viewers. It could be an interesting way of choosing a leader. Instead of us voting, it'd be last man standing. Oh, and of course Don Cherry would moderate the event. You know Don Cherry. He's the loud-mouthed and loud-suited hockey commentator who once said visors were only worn mostly by sissy Europeans and French guys. Caused a furor.
I might watch that! 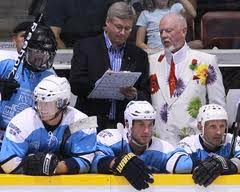 Cherry tells Harper to put his visor on for French debate.

Hey guys, lookit this! Everyday Goddess has been lurking about again and last week gave me an award for last Thursday's post How Cliche. Thanks EG! And thanks to all who dropped over from her blog. In keeping with the theme of that post, any friend of EG's is a friend of mine, although I won't count my new visitors until they're hatched. For all in tense and porpoises this is a great award! heh, heh.

Anonymous said…
Poutine scars the crap out of me! It just does. And I try not to nightmare about it.

As for Canadian politics? It's somewhat comforting (in a not so funny way) that we're (the U.S.) not the only ones on this continent with corrupt politicians.

Cheryl said…
Hi Noname,
You are correct in assuming that I wasn't aware of Candada's current election campaign. Call me ignorant (only because calling me a total moron seems a little harsh) I didn take a minute to read Wikipedia to get an inkling of knowledge and still don't understand anything about what the hell is going on. I do sense that Harper fits some of the criteria to be a US President though.(never mind that he wasn't born here because we have Donald Trump to chase that birth certificate down if necessary)Anyway, assets if he were running for office in the US - He has some scandels going, he has a stylist paid by the government, and he is making a cameo on something called Murdock Mysteries. Could you write a Candadian Government for Dummies book in your spare time and I promise to become better informed.
18 April 2011 at 10:03

nonamedufus said…
Cheryl: Good to see you finally got your, ahem, butt, over here. A Canadian Government Book for Dummies? Already been done. It's called the Conservative Party platform.
18 April 2011 at 11:10

Cheryl said…
Oh, I have been over here before keeping an eye on you. I am one of your Sheep, after all. Putting you on my blog roll today so my friends can come over to your funny little playground, too.
18 April 2011 at 11:26

Nicky said…
It is so frustrating that Harper has become the Teflon man. The thing is, as I believe you've previously pointed out, our alternatives are also quite pathetic. I still think you should run, Dufus.
18 April 2011 at 12:29

Cheryl said…
U my northern neigbour are so clever and laugh-out-loud funny. I am glad u Canadians like US. (see what I just did there)
18 April 2011 at 13:28

Chris said…
I've never understood why you canucks don't just elect Gretzky Prime Minister and be done with it.
18 April 2011 at 13:48

nonamedufus said…
Chris: There were enough tears shed when he left Edmonton for LA. You think we wanna go through something like that again??? I can just see Haper's election ads: He didn't come back to coach Canada's Olympic team for you!
18 April 2011 at 14:32

Mike said…
As 'bad' as the Harper government is, the other yokels right now are worse.

Right now Canadians are a bunch of entitled pansies who need a good butt whoooping. That means ALL of us.
18 April 2011 at 16:23

nonamedufus said…
Spaz: I hate to say it but entitled pansies would enjoy a good butt whooping.
18 April 2011 at 16:29

http://howtobecomeacatladywithoutthecats.blogspot.com said…
If only all elections could be won and lost on the ice.... *sigh*
18 April 2011 at 18:07

Janna said…
It's the poutine. That's gotta be it.
And possibly the mysterious prevalence of the letter "U".
Which reminds me, back in 2008, I wrote a post in Canadian.

Ziva said…
There must be something in the air that's causing elections to be exceptionally idiotic; our parliamentary election was held last weekend, and the absurdly clear winner was a racist fundamentalist party that wants out of the EU, wants to close the Finnish borders to refugees and immigrants and wants me and the rest of the Swedish-speaking minority to burn in hell. I sure hope your candidates are better and aren't going to banish the French-speaking population from the country.
20 April 2011 at 03:28

Shawn Ohara said…
I am not overly concerned with the minor scandals. They are nothing compared to the government under Chretien. I find that Ignatieff is so far from what I imagine a Prime Minister to be. Not Prime Ministerial at all. I fear and hate the Bloc. The country needs a majority government and right now Harper is the only party leader capable of leading it. he may not be good for every Canadian but he is great for Canada.
20 April 2011 at 09:38