Brits Are Mad As Hell 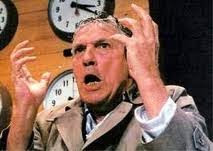 That's "mad" as in upset not unbalanced, although a case might be made for the latter. But I digress.
A recent survey of jolly old Englanders indicated they spend three and-a-half years of their lives being angry. That works out to an hour and 19 minutes a day! Well, hell, that's easily enough explained. If you had to drink beer the consistency of motor oil, eat tasteless delicacies like bangers and mash and live without central heating you'd be bloody angry too!
Here are the top ten anger triggers:
1. bad customer service
2. automated phone systems
3. public transport
4. modern technology
5. queueing
6. traffic wardens
7. dog mess
8. learning drivers
9. eating on public transport
10. public display of affection
I can't argue with most of those as things that tick me off. Although I don't understand getting angry over public displays of affection. Public displays of eating on public transport, okay. But holding hands and kissing. That means there's still hope, people. Unless, of course, couples are feeding each other in public.
Canadians have long had three things to complain about: the weather, imported American beer and the Toronto Maple Leafs. And all with good reason. All three suck.
But thanks to the Brits, here in the colonies we now have a fourth item. If I see one more promo for the televised wedding of Harry and Kate (or is it William? Yeah, it's William. Those Royals all look the same. I think it's inbreeding.) I'm gonna throw a brick through my flat screen TV. Those 2 should have eloped.
But then I'll have to use public transit while I watch people eating, looking out for traffic wardens as I jaywalk, avoiding dog mess while I queue up to encounter bad customer service as I purchasing replacement modern technology...
And as for public displays of affection? I Have my own royal greeting. On April 29th I intend to wave one finger instead of the whole hand.

Anonymous said…
So I should take back the Kate Middleton doll I got you?

And I really thought it was a perfect gift for you.

meleah rebeccah said…
It does seem like there is a commercial, or an advertisement, or "breaking news" every FIVE SECONDS regarding the wedding of Harry and Kate. I wish they'd hurry up and get married already so we can move on with our lives.
11 April 2011 at 10:31

nonamedufus said…
Quirks: There's too much time, money and effort being devoted to this. People get married every day. Why do people care about this wedding? I don't get it.
11 April 2011 at 12:40

00dozo said…
You can't discount another Canadian (or should I say "Torontonian") anger trigger: road construction, in the summer (it's expected), usually causing more traffic than necessary on a long weekend when you're heading 'up north' on the Friday. Same applies for the return trip on the Monday.

Linda Medrano said…
Come on, Dufus, you know you are going to stay up all night and watch the "Royals" get married. Actually, I named my dog Harry after Prince Harry. I do like that guy and he smokes a little pot. (Not my dog, the Prince.)
11 April 2011 at 14:17

nonamedufus said…
Sandra: A little sensitive, eh? Everyone knows we have our seasons mixed up in Canada. The leafs always fall in the spring.
11 April 2011 at 21:32

Bluezy said…
I had a friend describe Guiness to me and I backed out on buying any. I need to go to a bar and just try a shot glass of it to say I did, though and maybe I might want a whole mug.
12 April 2011 at 22:29

nonamedufus said…
Bluezy: I'm working my way up. I've discovered a a Quebec beer called Griffon which is dark and a little heavier than I'm used to. I like it. Who knows. Maybe someday I'll again try Guinness.
12 April 2011 at 22:33

Canadian Blend said…
I'm seeing far too much about Harry and Kate. Each time they pop up on TV or in Mozilla all I can wonder is why am I supposed care? I'm sure they're a lovely couple of people... but really.
13 April 2011 at 10:22

Anonymous said…
Ha - i live in the UK and the wedding is barely mentioned, the only people who give a shit about the royals are our colonial friends. We couldnt care less about the sausage eating wasters!
14 April 2011 at 11:22

nonamedufus said…
Anon: Ha, an anonymous Brit. Regardless, with a view like that I'm starting to like you guys. Sausage eating wasters? Now you're talking. Oh, present company excluded.
14 April 2011 at 15:16