How To Catch The App Of Your Eye 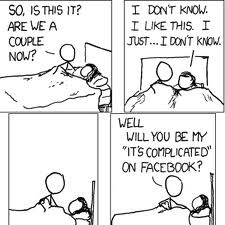 The commonly held view is that Facebook is not a dating service. But if you've seen the movie The Social Network, that statement's somewhat disingenuous given the social network service's origins, or at least the original idea that someone else had that Mark Zuckerberg refined to launch his currently 600 million member internet network.

However, recent developments might lead one to wonder otherwise.

I read this week that a young southern California computer programmer launched a "Breakup Notifier" in February. The brainchild of 24 year old Dan Loewenherz, the Facebook app informs its users via e-mail once targeted friends change their relationship status.

Man, kinda takes all the work, and fun I would imagine, out of stalking the more vulnerable among your close circle of friends.

But it doesn't stop there. There's also a "Crush Notifier" where people pinpoint friends they're interested in and if that person's interested they each get an e-mail telling them of their mutual attraction.

Rounding out this tasteless troika of tentative but targeted testimonials is something called the "Waiting Room" where the love of one's life is e-mailed that someone is interested in them. To find out who it is, they need only drop their paramour, change their Facebook relationship status to single and - "bang" - Cupid strikes.

Really. This is all true. This is too stupid to make up. It stands on it's own as stupid without any help from me.

Me? I'm long past the dating scene. Although as I recall it was much more fun in bars before the internet or even Facebook existed.

But I can see where this is going. The more "mature" Facebook users (read baby boomers) will demand apps of their own.

The second will be "What Happened Then Notifier" - ie. "Mom went and got the ladder out to go up after her..."

And the last will be "The Upshot Notifier" - ie. "The funeral's scheduled for Thursday."

This post first appeared at The Parody Files, my blog home away from home.

Unknown said…
looooool... actually i saw these app featured a couple months ago in failbook.org. I think Facebook already banned this app? :P Even so... it is still hilarious... XD
7 April 2011 at 09:59

Anonymous said…
This is hilarious! I love it! And I for one, would love the upshot app.

nonamedufus said…
Justine: I don't know of you saw the movie but there's a scene where the Facebook co-founder's possessive girlfriend berates him for not changing his status to "in a relationship". It's hilarious. It's like the hand that feeds him bites him...or in this case sets his bed on fire.
7 April 2011 at 12:45

Linda Medrano said…
This was really great, but I thought that Mom getting the cat off the roof said the "upskirt app" and I was surprised it killed anyone.
7 April 2011 at 14:13

Jaffer said…
I think I'll keep my current number of friends on Facebook and not add anymore.

Jeremy from We Took The Bait said…
Hey, Dufus!

meleah rebeccah said…
I think my favorite one you made up is :"The Upshot Notifier" - very funny.

nonamedufus said…
meleah rebeccah: That's such a lovely name by the way. It's an old joke, just updated for my Facebook example. I thought the move was fascinating. I had no idea the Napster guy was involved. (Oops, spoiler alert!)
9 April 2011 at 18:05