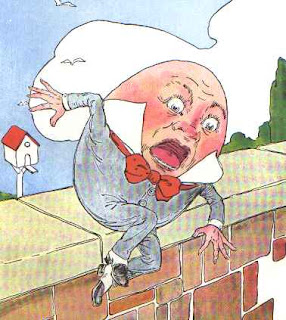 Boy it's been some time since the last post in this series - last September.  Back in the days when the now defunct Humor Bloggers Dot Com was still a going concern there was a forum thread called The Humpty Dumpty Dictionary Challenge started by my fellow Canadian blogging buddy Frank Lee Mei Dear at I Don't Give A Damn.  As well, Jan at The Jannaverse does these from time to time.

The idea was to take word verifications you found in order to leave a comment on other's blogs and make up a definition for it.  One of my early favourites was...

...nachos that don't move
You see what I did there was take two words - inertia and nachos.  Clever, eh? Or maybe I just have too much time on my hands.  Nevertheless here's my latest collection from word verifications I've come across lately.  Be warned: I have a very uniquely odd sense of humour...

When there's less left over than originally thought
(re(si)dual)

One who has survived a roll down an obscure hill in Glastonbury, England
(go ahead, Google Tor. I did!)

The best in a Dion and the Belmonts tribute band contest

When the evil wizard Daedalus was looking for his son Dedil he asked "Where's Dedil at?

If the Metropolitan Opera could talk, this is how he'd introduce himself

Someone who mistakenly thinks they're the smartest in a group

And did you know that I'm your number fandinista?

Donnie said…
May HBDC rest in peace. I had forgotten all about that thread. I don't use word veri, but they do have some pretty cool and interesting "words".
23 July 2010 at 10:55

nonamedufus said…
Scraps: I think it's about time we start our own "word-ver" dictionary. Then we'd have a better idea of where the heck these words come from.
23 July 2010 at 11:22

nonamedufus said…
Quirks: I know you're my #1 fandinista and one of my oldest - not in age, but since I started my blog. My cancer/rocknroll/blathering bloggin' buddy. I'd never forget!
23 July 2010 at 11:25

nonamedufus said…
Don: Yeah, too bad about HBDC. It was a great place to hang out. I sure hope Chelle's doing okay. Those veri-words can be pretty bizarre!
23 July 2010 at 11:26

RA said…
Your translation of tholo threw me to a galaxy far away! Brilliant!

There's also another way of looking at these verification words: imagine that they have something in common with the person who's blog you are visiting, and then see what they mean. As hilarious means as any to cope with those annoying controls. :)
23 July 2010 at 12:16

Jeremy from We Took The Bait said…
Not to be all nit-picky, but wouldn't "inerchos" be nachos that tended to remain in motion, until friction thwarted their forward progress?

The word that you defined is "sedenchos."

By the way, my word is "gracturi," and I was trying to think of a clever one.

The best I can come up with is a urologist from Granby, CT.

nonamedufus said…
RA: But, shucks, I wouldn't want to say anything bad about the people who's blogs I'm visiting. I think the impersonal approach is best. Although, I may try your little exercise in my mind. haha
23 July 2010 at 12:32

Chris said…
Good stuff. Janna does some great ones too. FYI, my word ver for this post is "saniste".

Which would be the most "normal" member of a Mariachi band.

Anonymous said…
Too bad that site went under. Sounds like it was a hoot! Those are pretty awesome definitions/ Have you ever read the book, "The Meaning of Liff?" ("LIFF", not "life" as in a Monty Python sketch) Get your hands on a copy if you can, it's hilarious! - G
24 July 2010 at 10:17

nonamedufus said…
Georgina: HBDC was a great place to hang out. The Meaning of LIFF's by Douglas Adams of Hitch Hiker's Guide to the Galaxy fame. A funny guy. I'll have to put Liff on my list of "to reads".
24 July 2010 at 10:30

nonamedufus said…
Boom Boom: Yeah and I appreciate you being a fandinista, for sure. HBDC was a great place. Too bad it went to that big blog round-up in the sky.

Say speaking of Darth Vader, did you see that news story about the guy who robbed a bank wearing that costume. I'm not kidding, now. The headline actually said "Darth Vader Strikes Bank". I guess the poor guy went over to the dark side.
24 July 2010 at 13:07

And did you know that I'm your number fandinista?