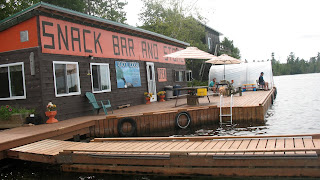 Every summer for the last 9 or 10 years a buddy and I have made our way to Lake Temagami in northern Ontario for a week or so of fishing at Loon Lodge.  We'd hook his boat up to the back of his GMC Jimmy and set out for the 7 hour trip from Ottawa to Temagami.

About an hour shy of our destination, we'd stop in North Bay to purchase our provisions: groceries, beer and wine.  Enough to last us through the week.  Since we'd be eating our dinners at the lodge we only had to worry about breakfasts, lunches and snacks.  So bacon and eggs, cold meat, cheeses, bread, chips and pickled eggs rounded out our shopping list.  And ice.  After all we had to get a head start on cooling down the beer.

An hour later we'd arrive at the landing, put the boat in the water, load it with our "provisions", park the Jimmy and slowly make our way to the lodge. 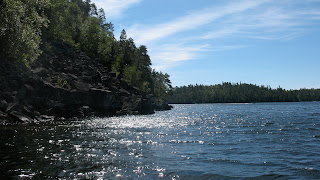 Lake Temagami
It's been the same routine every year.  And each year our enjoyable week of fishing and relaxing has passed uneventfully.  Except one year.

One year, we woke up to the sounds of yelling and splashing.  When we got up to see what was going on we discovered another fisherman's boat had sunk overnight in the mini-marina at the back of the lodge.  It was an old wooden boat, the owner of which admitted had a tendency to leak.  Well leak it did and my friend and I laughed pretty much all day over the incident.  And here's why. 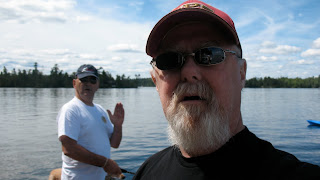 Fishin' buddies
The day before my buddy and I were out at mid-day trolling the shore of one of the lake's estuaries.  It was raining but we didn't care.  That's what fishing's all about.  We both had our life jackets on, we wore ball caps and we had rainproof jackets and pants so we didn't really care about the rain.

My buddy thought he had a bite and tugged on his line.  It was then we realized the motor had stopped.  Try as he might my buddy couldn't get the engine started.  I even tried.  Like I know about boats and motors.  So we got out the paddles and paddled to the nearest dock.  We had visions of paddling all the way back to the lodge which was quite a hike but there happened to be someone above the dock opening up his cottage for the season.  As luck would have it, he had a phone.  So we phoned the lodge and asked the lodge owner's wife if she could radio the lodge owner in his boat to come and tow us.

About 30-45 minutes later the lodge owner showed up.  Now there were four of us scratching our heads wondering what the hell the problem could be.  And by now the rain is just pouring down.  All of a sudden the cottage owner looks down at the three of us in the boat and says, "Say, does your boat have a kill switch?"  Now a kill switch is a safety device next to the throttle to which the driver attaches his life vest via a cord.  If the driver falls out of the boat, the engine automatically stops or is killed.  So a light goes on over my buddy's head.  He flips the kill switch, the engine roars to life and the four of us shake our heads.  But thankfully, the cottage owner was a big help.  And the lodge owner was willing to help. 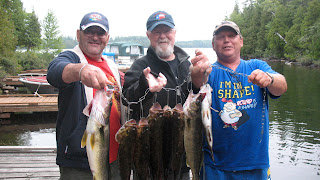 My buddy, me and the lodge owner - we actually do catch fish!
Flash forward to the next day and the other fella's sunken boat. I turned to my buddy and I said, "Boy you must be really happy, eh?" "Happy, why?" he says. "Well, that tops what happened to us yesterday and now folks at the lodge will have somebody else to laugh at.  Wasn't that helpful?"


The prompt over at Theme Thursday this week is "help". Clicking the link will aid in you seeing how other bloggers covered off this theme.

Brian Miller said…
ha. happy to be out of the spotlight...nice. we actually had a kill switch in our car...had to go rescue my wife once only to find that was what the problem was. happy tt!
15 July 2010 at 07:18

nonamedufus said…
Brian: We felt pretty stupid when we discovered just what the problem was. Especially after dragging the lodge owner out for a 45 minute boat ride in the rain.
15 July 2010 at 07:39

Lesley said…
does the lodge owner remind you every time you visit, to check the kill switch when you go out? that would also be helpful, if a little embarrassing.
15 July 2010 at 07:48

nonamedufus said…
Don: The place we stay at is called Loon Lodge and as the sun goes down and we sit back and enjoy a beer or two all we hear is the cry of the loons...and the buzz of mosquitos.
15 July 2010 at 09:05

Roy said…
Ah! It's always great to have somebody come along and take the public eye off you when do something dumb! Heh, heh. I've been saved by the headlines several times now.

Gabriela Abalo said…
a fun story, although the experience wasn't that great.
I like your positive way of looking at it.

Canadian Blend said…
Years ago I was out on a large lake in Kentucky, not far from where the buoys were that marked the barge lane, and couldn't get the motor started. In my case something had broken loose and punched a hole in the side of the engine housing. As I used the trolling motor, convinced (maybe foolishly) I'd make it as dad had an extra battery in his boat, I considered that I was on a large lake, trolling against the wind, and trying to get to shore -- but as bad as things seemed ... I was still in a boat and not at work.

nonamedufus said…
Canadian Blend: Great story. And I like and agree with your attitude. Out in a boat beats the office every time.
15 July 2010 at 10:59

Betsy Brock said…
being a nascar fan, I know all about kill switches. Drivers bump them accidently sometimes. ha. Funny story...and aren't you glad the lodge owner was so nice and such a good sport!?
Love the photo...now those are some nice fish to fry! :)
15 July 2010 at 12:35

RA said…
Heheh, that's the spirit! :D
Your fishing trips sound like great fun... maybe the incident was just a downpayment for too much of a good thing?
15 July 2010 at 12:50

Anonymous said…
Did that really happen? I dunno. Something about that story smells fishy to me.

Me said…
Ha! Great punchline, always a fine thing to be one-upped in such circumstances!

The lodge sounds lovely...I'm in S. Ontario, and can't get north anywhere near as often as I would like...

nonamedufus said…
Me: The Lodge is a great get-away. A tad rustic but on'e able to decompress.

MikeWJ at Too Many Mornings said…
Great story, and it's cool that you have a buddy to go fish with every year. Everybody should be so lucky.
16 July 2010 at 02:57

moondustwriter said…
You were off the hook

Leeuna said…
Great fishing tale. Nice stringer of fish too. And that lake looks so inviting, it must be a fisherman's dream.
16 July 2010 at 13:36

nonamedufus said…
Leeuna: Thanks. Yes, there's no place like it. I love it there. The lake is huge with 5 fingers. There are cottages and several kids' camps. But when we go - either late June or early September - things are fairly quiet.
16 July 2010 at 13:45

nonamedufus said…
Baino: If men are gonna screw up there' no better place than amongst other men off in the wilderness somewhere.
17 July 2010 at 09:14

Anonymous said…
Gotta do what you gotta do. Sorry boat-sinking-guy, but you helped!

nonamedufus said…
A.Decker: Funny thing is, after he drained his boat and the lodge owner got his soaked motor running again, the fella was back out on the lake fishing...and bailing.
17 July 2010 at 14:02

A.Decker said…
Gotta do what you gotta do. Sorry boat-sinking-guy, but you helped!

Quirkyloon said…
Did that really happen? I dunno. Something about that story smells fishy to me.

Gabriela Abalo said…
a fun story, although the experience wasn't that great.
I like your positive way of looking at it.

Roy said…
Ah! It's always great to have somebody come along and take the public eye off you when do something dumb! Heh, heh. I've been saved by the headlines several times now.

nonamedufus said…
Me: The Lodge is a great get-away. A tad rustic but on'e able to decompress.