A Mother of An Invention 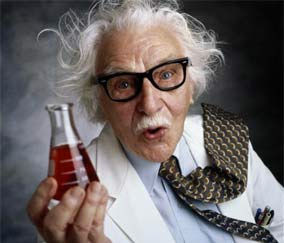 There's an interesting background story to a recent Canadian invention.  An apparently tasty one at that.  But before we get to that, let's pause and review some of the things invented by Canadians.

The Walkie-Talkie - the precursor to the fast food drive-thru order placement thingy.

Standard Time - but we didn't invent daylight savings time.  You can blame a New Zealand dude by the name of George Vernon Hudson for that dim move.

The telephone - it's what we used before texting.

The hydrofoil boat - oh boy, just what we need: a boat that can fly.

The snowmobile - hey. we gotta have some fun up here.

SONAR - it was invented by Reginald Fessenden.  Hey, at one point in my life I lived on Fessenden Street.  And every time I gave my address I had to spell it!

Ice Hockey - puck off, we did.

Table hockey - but of course, it's what we play when the ice melts up here.

Basketball - funny how a Canadian invented the game but so few Canadians play in the NBA.

Look up, look way up - IMAX

And I haven't even mentioned what is perhaps our most famous invention - and best known - the Canadarm.  Yeah, that thing on the space shuttle with the Canadian flag on it.  It stands on guard for thee, America. 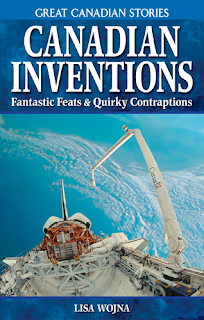 Well, did you know Canada invented something else to aid in space exploration?  Canadians have only just learned the details behind an out of this world taste sensation.  It took 2-3 months of research and development and cost over $400,000 - to develop -wait for it - a space cookie. Yep, you heard me right, a crumby (pun intended) cookie.

This mother of an invention, originally called the CANookie (boy we CANadians are a clever lot) Canasnacks (oh, yeah, like that's so much better) made it's way skyward in the pocket of now retired Canadian astronaut Dave Williams in 2007.

Canada was to have developed an entire space menu for astronauts - take that Tang - but the idea was canned, or CANned, in favour of just the cookie.

Now this is how you make a cookie.  Apparently over 37 suppliers were involved in the cookie's development and more than 100 combinations of ingredients were tested and evaluated.  I wonder if they called in the MLE folks?

One of the devlopers' biggest concerns appears to have been how to apply a Maple Leaf logo on top of the cookie. 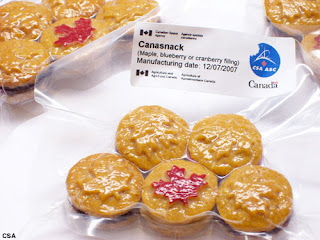 MMMM...looks so appetizing, in child proof wrapping, too.
The endeavour was highly labour intensive because some space cookie cadet decided each 5th cookie would have a red maple leaf, requiring the colouring to be applied by hand.

Astronauts won't be taking these Canasnacks into space anymore.  The space program has been cancelled.

And you won't be seeing them on store shelves soon.  The government can't find an interested supplier.


This post originally appeared at Sound Off To America

nonamedufus said…
00dozo: You know it's a good thing they did away with the CANookie name. After all there's a ban on sex at the space station. If anything astronauts CAN't nookie.
13 July 2010 at 09:03

nonamedufus said…
Quirks: Astronauts? Yeah! Hell, some of our politicians are pretty spaced out.

Donnie said…
If Messicans had invented Taco Bell, I would have gladly credited them with something useful. I can't think of one meaningful invention that has come from our "friends" south of the border. Thank God for Canada!
13 July 2010 at 12:05

nonamedufus said…
KABLOOEY: The first patent for peanut butter as it is known today was apparently issued in 1884 to Marcellus Gilmore Edson of Montreal, Quebec, Canada. Isn't that just jiffy?
13 July 2010 at 15:21

nonamedufus said…
RA: OK, I'll give you ice-skates. Chalk one up for the Finns. Where would we be without them? Ever hear of another Canadian invention called broomball - played on ice without skates?
13 July 2010 at 16:25

http://howtobecomeacatladywithoutthecats.blogspot.com said…
Oh, Canada! I'm so proud of you CANookies!
14 July 2010 at 07:26

nonamedufus said…
CL: Could have been worse. We could have invented a pasta and called it CANoodle.
14 July 2010 at 07:34

MikeWJ at Too Many Mornings said…
Candadians invented a lot of things, but not peanut butter. That was George Washington Carver, the great African-American inventor. I learned that in grade school. Stop trying to take over our country.

nonamedufus said…
Mike: The invention of peanut butter is in dispute. In 1884, Canadian Edson was awarded a patent. In 1897, American Kellogg (yes that Kellogg) obtained a patent. And, in 1903 Washington Carver began his PB research.

Of course if you really want to be sticky about it, the Aztecs were eating peanut butter hundreds of years ago and Africans have been grinding peanuts since the 15th century.