July 08, 2010
You know, I had the greatest parents.  Growing up in Toronto I could do practically anything I wanted.

I wanna go to choir school and learn to play the piano.

Okay I threw that last one in.  My parents wanted me to go to choir school and learn to play piano.

I must say I didn't really excel at any of these things, including the piano much to my parent's deep disappointment.

And I do recall arriving home from school downtown after an hour and-a-half subway and bus ride to my friends deriding voices, somewhat off-key saying: "Look, look it's choir boy...la,la,la,la,la,la,la.

So after two years I quit St Michael's Choir School and took up more manly pursuits.

One of them was baseball.  I was 8 or 9 years of age and of course back then there was no "beginner's" league.  You know with the ball on a batting "T".

Nope this was the real stuff.  Just like the AAA Toronto Maple Leafs baseball team I'd seen play in a stadium a stone's throw from the Canadian National Exhibition. Well, being AAA, they weren't the real stuff but what did I know.  I was 9. 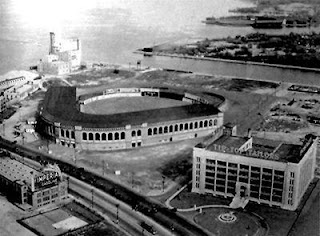 Maple Leaf Stadium. I didn't play there but I watched a baseball game.
But this was organized baseball.  Not the kind you play with your friends in the street with a sewer for 1st base, a garbage can lid for 2nd, little Jeff's sister's hula-hoop for 3rd and your jacket for home plate.

Nope.  This was the real thing with real bases, a backstop and a pitcher's mound.

Now I don't know what I was thinking when it came to choosing positions but I thought it'd be cool to be pitcher.  Yeah, cool.

Of course the coach didn't realize I'd never pitched before.

Oh, sure, I'd played catch...throwing a ball back and forth with a friend, but I'd not had any experience with the strike zone.

Now kid's baseball in our neighbourhood was a big thing.  Other kids from nearby as well as parents of the players had all gathered to watch the game.

I didn't know I'd have such a crowd for my debut.

But, hey, no sweat.  I trotted out to the pitcher's mound with my brand new Clairlea Park team sweater on and my Toronto Maple Leaf baseball cap on, the beak dutifully creased in the middle.

"Play ball," said the guy behind the plate.

I leaned forward, took a long look at my catcher, just as I'd seen the pitcher do at the Leaf's game, and let fly.

And let fly I did.  That softball must have had wings.  It left my hand and flew high over, not the batter, the backstop.

Maybe I could have played for the Rochester Wings!
Uh-huh.  Yeah.

I'm told it was the shortest pitching career on record.


This was my Theme Thursday take on "ball".  Check the link out to see how other bloggers have thrown themselves into this week's theme.

Donnie said…
I played organized baseball from age 6 until my freshman year in college, and one of my most memorable moments was in "Morning League", my first year. I ran home after the game screaming, "No more cheating. No more cheating. We have a guy that makes sure we don't cheat. He's call a vampire." I was only six...
8 July 2010 at 08:57

00dozo said…
I'm guessing the coach put you out in left field after that.
;-)

Roy said…
Yeah, I stuck out my first summer in Flea League and never went back. I was lousy at the game, and a left-hander to boot.

Anonymous said…
You played with balls?

No, not those kind of balls. Baseballs!

I take it that baseball was "verra verra goot to you?"

Guy on first, I'm at bat. I hit the ball, get to first base, see the ball is just now being recovered giving me lots of time to get to second base. Which I did. I'd no sooner stopped on second to see what was going on when someone ran into me. It was the guy who'd originally been on first base.

He was declared out by the referee, and I was declared persona non-grata by my team mates (although I believe they used a less formal term -- something along the line of "moron.")
8 July 2010 at 14:11

Gayle said…
This is my first time here and I'm still smiling over your profile pic! Great story-telling, too on the ball theme.
8 July 2010 at 14:27

None said…
I spent a lot of time watching my son on the bench of various ball teams. There were so many kids with spirit out there and sounds like you were one!
8 July 2010 at 16:07

Chris said…
Pitching is one of those things that is way harder than you'd think. I pitched once . . . ONCE. I had exactly two pitches. Balls, and hits.

nonamedufus said…
Chris: Could have been worse. You could have done it in one by hitting the batter!
8 July 2010 at 17:51