Did He Wish He Was An Oscar Mayer Wiener?


There was an odd story out of Danvers Massachusetts last week about a guy you might say threw himself into his work.
A cleaning man had to be rescued after he was sucked into a machine at a sausage making company.  The guy was cleaning the vacuum-type machine that is used to season meat.  Now isn’t that odd?  Shouldn’t the machine work the other way.  How can it season the meat if it sucks.  Wouldn’t it work better if it blew the seasoning onto the meat.  Oh, well.  I don’t pretend to know the inner workings of a sausage-making factory any more than I know the inner contents of a sausage. 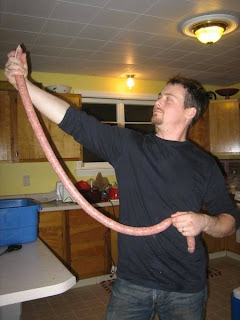 Stop showing off!
Local police reported the guy’s head and shoulders got stuck in the machine after it somehow turned itself on while being cleaned.  Man, that’s some vacuum.  It’d give Dyson a run for it’s money.
You know, I’d say the incident gives new meaning to getting “sucked in” – as well as to “seasoned worker”.
Reminds me of the story of the guy who worked at a meat factory and accidentally backed into the meat grinder.  Yeah, he got a little behind in his work!
This post originally appeared on The Parody Files blog.

I just hope I didn't buy any sausage "on sale" that week.

I guess he quit his job because it just sucked.

RA said…
Maybe the reporter got it wrong here, and the machine doesn't really suck. But since he heard the worker say "this machine sucks!" he is now serving us with an erroneous mental image about a machine that works the wrong way around...?
28 May 2010 at 15:32

Kelly said…
"Suck honey, don't blow; it's only an expression." Did I say that out loud?

http://howtobecomeacatladywithoutthecats.blogspot.com said…
Now, there's a Darwin award in the making....
29 May 2010 at 08:45

Kelly said…
"Suck honey, don't blow; it's only an expression." Did I say that out loud?