She's Too Fat For Me 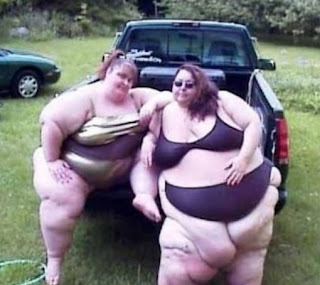 Ever wonder why the majority of Americans are overweight?  No?  Well, there are enough signs out there.
For example, Michelle Obama has adopted every obese child in the nation to take under her wing and convince them to eat better.  Although I doubt the West Wing is big enough to hold them all.
Times are sad when one of the most popular shows on TV is "The Biggest Loser".  Now who ever came up with the idea of putting a bunch of 300 plus pounders together "workin it" for the rest of the world to see.  That's not too much information, that's too much cellulite.  Never thought I'd say this, but bring back Sweatin' To The Oldies. 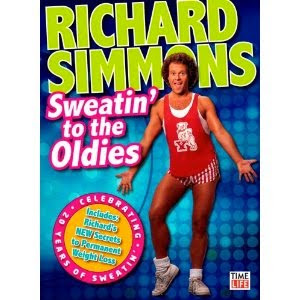 And the hamburger companies aren't helping.  Every second ad on TV these days is about some super sized, multi-pound, bacon-topped (okay there's nothing wrong with that ingredient), cheese-added gargantuan slab of hamburger.  McDonald's, who once prided themselves on their "healthy" menu of salads and such now advertises a three-quarter pound burger.  Where's the beef?  In your ever expanding belly!
It's no wonder the Canadian and American Army brass decided to remove Tim Horton's and Burger King from their Afghan bases.  They say an army runs on it's stomach.  It was getting to the point these armies couldn't run!
Wait a minute.  I think I may have stumbled upon something.  Wait a minute. Why not transfer these fast-food outfits to the Taliban, wait a few months, and...I'm lovin' it!
This post appeared at Sound Off To America earlier this week.

Donnie said…
Fat and fast foods. It's one of my beefs against people. They claim they don't suffer? Fine. I'll see them in an early grave...chomping on chili cheese fries.
18 May 2010 at 07:33

Canadian Blend said…
In all fairness to us... it was the Canadians that came up with Poutine. :)

My mom spent a couple months in Vancouver with my wife. Once in a while they'd slip across the border as my mother likes to go to Sam's Club. After several trips my mother said, "You can certainly tell what side of the border you're on just based on the size of the people."
18 May 2010 at 10:55

Anonymous said…
Gah! All I can think of is the song by The Police, "don't stand so, don't stand so close to me!"

nonamedufus said…
Quirks: And I think of Big Bottom by Spinal Tap:

Big bottom, big bottom
Talk about mud flaps, my girl's got 'em
Big bottom drive me out of my mind
How could I leave this behind?

Chris said…
Love it, Dufus! "My baby fits me like a flesh tuxedo. I wanna sink her with my pink torpedo."

MikeWJ at Too Many Mornings said…
You know, I was really happy you came back until you posted those photos of those fully full-figured women. Some things are best left unpublicized, NoName.
19 May 2010 at 01:56

The Queen said…
Listen asshat.. my sister and I were on private property.. You had no right to come over the fence and take this picture.. You... are not nice!

http://howtobecomeacatladywithoutthecats.blogspot.com said…
Okay... who gave you my pin-up photo?
21 May 2010 at 07:24