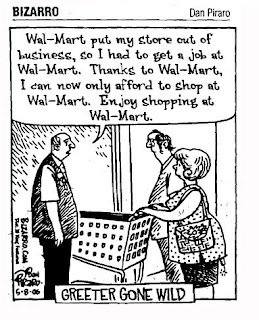 Police in New Jersey have a man in custody following an incident at the local Wal-Mart.  Last week, an unidentified person accessed the store's public address system and announced: "Attention Wal-Mart customers: All black people leave the store now."
The incident went quite beyond the childhood prank of telephoning an individual at random and asking if their refrigerator was running and then telling them they better catch it.
In the Wal-Mart incident hundreds of shoppers were accosted by the offensive message and it caused several shoppers to boycott the store and others to publicly admonish the retailer for the ease with which the public address system was accessed.
What I'm curious to know is how did the police department respond when a call came in to send a black and white to the Wal-Mart store? 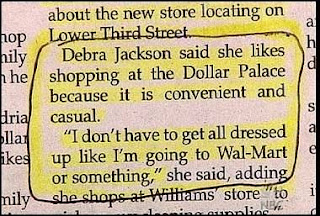 Me-Me King said…
O.M.G! I am laughing at the thought of somone here announcing for all people of hispanic decent to leave the store...lol!
22 March 2010 at 09:12

nonamedufus said…
Me-Me: We don't have a lot of hispanics...or blacks...but it's still tough to find a parking spot outside the store! Now, if someone announced "all obese people please leave the store" I think they'd be out of business.
22 March 2010 at 09:47

Canadian Blend said…
I didn't realize there was a dress code for shopping... I don't get all dressed up when I go to Target. Maybe I should rethink what I wear when I step out of the house.
22 March 2010 at 14:23

Kelly said…
My flabber is gasted at the thought that people "dress up" to go shop at Walmart. However, based on what I've seen on peopleofwalmart.com, people really DO "dress up" when they go to Walmart although it's not exactly "Sunday-Go-To-Meeting" attire.
22 March 2010 at 14:49

nonamedufus said…
Canadian Blend: Imagine what those people looked like before they "dressed up"!
22 March 2010 at 14:52

nonamedufus said…
Kelly: Depends on the "meeting". I think for many people going to Wal-Mart is a social event. They're there to see and be seen! It's a big part of their week, or day!
22 March 2010 at 14:55

Donnie said…
That was a 16 year old kid that pulled that prank at the WM store. Funny as hell. I never did hear if the blacks complied though.
Dressing up to go to Wal Mart? Sheesh, I don't do that when I go to a funeral.
22 March 2010 at 15:55

nonamedufus said…
Don: Funny, yeah, but I guess it pissed some folks off.

Dr Max Tunguska said…
Ok, might not agree with the message, but I love the idea of pranking the tannoy. So many possibilities.

http://howtobecomeacatladywithoutthecats.blogspot.com said…
I always get dressed up when I go to WalMart... so much classier than the dollar stores.
22 March 2010 at 19:51

Chris said…
Oh God. Dressed up, like when I go to Walmart? White trash sinks to a new low.

MikeWJ at Too Many Mornings said…
That Debra Jackson quote is priceless. Most people at my Wal-Mart barely wear clothes at all.

nonamedufus said…
CL: Is that cause you drop off there on your way home from church? Or do you worship at the House of Wal-Mart?
23 March 2010 at 07:03

nonamedufus said…
Mike: As long as they can manage to cover extended stomachs and emerging butt-cracks - or worse - I'm okay.
23 March 2010 at 07:08

nonamedufus said…
Don: Funny, yeah, but I guess it pissed some folks off.