Former Presidents Should Be Seen And Not Heard

March 01, 2010
There's an old proverb that goes "children should be seen and not heard".   At a breakfast Friday, with former White House staff, George Bush, of all people indicated the same should hold true for former presidents.

It seems he wasn't too pleased when former President Jimmy Carter gave him grief about his administration's position on the torture of terror suspects.

As for his own role in his post-president years, Bush told his former staffers:


"I have no desire to see myself on television.
I don't want to be on a panel of formers instructing the
currents what to do.  I'm trying to regain a sense of
anonymity."
Two points:

1. Why did he wait until now to come up with this?  He had 8 years.
2. I'm surprised he can even spell, pronounce or know the meaning of anonymity! 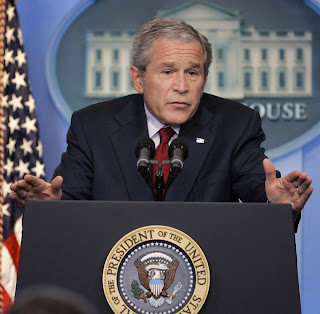 Canadian Blend said…
I read his comments someplace -- maybe HuffingtonPost. I want to hear him pronounce "anonymity." My thoughts are the person writing down Bush's thoughts cleaned it up for him.
1 March 2010 at 08:17

He signed up for the gig with ALL that comes with it.

You still hear jokes about somebody being "Monica-ed" and a Clinton's smiling mug comes up every time.
1 March 2010 at 09:09

nonamedufus said…
Quirks: Yeah but when Americans think about getting screwed, they always think of George. ;)
1 March 2010 at 09:24

nonamedufus said…
Kirsten: Good to see you around again. Yeah, if you wanna be President I guess you should be prepared to take all that comes with it...and after it!
1 March 2010 at 18:05

MikeWJ at Too Many Mornings said…
Sure, he has no desire to see himelf on television. Because he's a fucking idiot and he knows it and he's tired of getting flayed by the press and the public and even his own party. He practically ruined this country, and may still yet.

kathcom said…
How does he juggle anonymity with his new career as a motivational speaker? He's also going to have to show up one day to break ground on the Bush library. It will be filled with book!
2 March 2010 at 19:34