The Irish Art Of Dicky-Doo

March 04, 2010
One day while hiking through Ireland
I got lost in a wooded glen
But I saw something I've not seen since
Nor had I up to then. 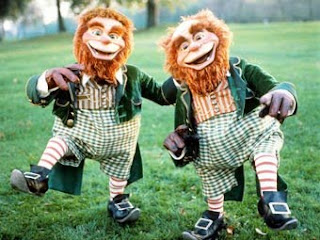 I'd stumbled upon thousands of lephrechauns
Heads bent low to their task
Except for every now and then
One or two would sip from a whiskey flask.
They'd split themselves into little groups,
For them what other kind,
And each was busy hard at work
On something they'd been assigned.
One group was unrolling bolts of cloth
Yards of soft green silk
And some were sewing fancy shirts
And others scarves and skirts.

Yet another group had various tartans
And were making kilts
And they'd check and double-check their work
With their heads gave little tilts.
But tailoring wasn't the the only task
The leprechauns weren't just making frocks
I viewed many a different activity
As I spied from behind where I hid, my rock.
Another group was cooking something
And I strained to get a better look
Oh but from the aroma I could tell
A huge cauldron of irish stew they'd started to cook 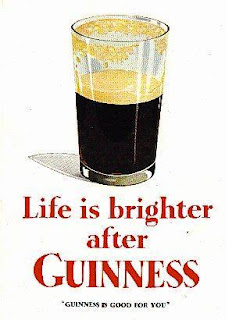 And near them another group
Was brewing up some golden brown stout
Guiness, I think they referred to it
And they taste-tested it from the spout.
All of a sudden a tall white-bearded man
Bearing a mitre and holding a rod
Appeared in the midst of all the activity
Like Santa Claus or a God

He was clearly in charge of everything
As little ones gave him their reports
And I heard them call him Patrick
And tell him all was ready for the airports
And they worked quickly to load up trucks
And speed them on their way
And that my friend is how Ireland's "green"
Finds its way around the world to us for St. Patrick's Day
Well, no, not really,  it's a tall tale
After an evening of good cheer
My buddy's and I had a fun time making it up
After a binge of drinking green beer! 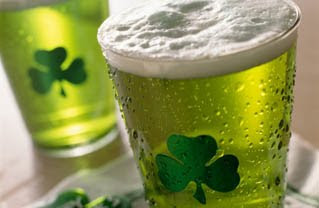 Theme Thursday kicks off March with the theme/colour GREEN.  What better interpretation than the preparations for St. Patrick's Day.  Drop by their site and follow the links to see how other bloggers have taken on "green".

Oh, and according to the Urban Dictionary, "dicky-doo" refers to a an unbelievable story or tall-tale.

Unknown said…
Poor thing, the guy got caught with his skirt down. lol

SHE IS NO LONGER ALONE

nonamedufus said…
Sh@KiR@:
When the wind blows
Everyone knows
And they stop and stare
At the lack of underwear.
4 March 2010 at 09:09

Anonymous said…
AND you have answered the age old question: what do men wear under their kilts?

Ziva said…
I was really enjoying the poem, but then I saw that picture of the bare ass and now I can't stop looking at it. I'm going to have to find myself an Irish fellow. Or is it the Scottish that wear kilts?
4 March 2010 at 09:59

Me-Me King said…
No wonder Chelle has a thing for men in kilts!

nonamedufus said…
Me-Me: You'll have to let me know what your mom thinks of my tall tale about short people.
4 March 2010 at 15:41

Tom said…
you got a great talent for dickydoos. Looking forward to my annual green beer.
4 March 2010 at 18:24

California Girl said…
Clever post with great visuals, a well writ dicky doo and a gorgeous ass under that kilt (I assume it's male :)
4 March 2010 at 22:35

nonamedufus said…
Mike: You have to admire Irish men. When insulted, they turn the other cheek.
5 March 2010 at 08:40