Do you ever stop and wonder just what the hell’s going on with our politicians?  I know I do.  I wonder, for example, given all the trouble some of them get themselves into why do they go into politics to begin with?  I mean being a politician is like living in a fish bowl.  With the pervasiveness and inquisitiveness of today’s “gotcha media”  as a famous female former governor likes to say a politician’s private life isn’t very private and his or her public life is on display for all to see.
The latest example – although who knows, by the time you read this there may be a new one – involves Democrat Eric Massa, recently resigned New York Congressman.  Yeah, that’s right, another politician from New York.  Given the way things are going with politicians in that state you’d think the voters were blind and not the governor.
Why did he resign?  I’ll take multiple-choice for $800, Alex:  a) he’s been accused of  improper sexual conduct, b) he has cancer, c) he’s the target of an ethics probe, d) he was forced out by the Democrats because he wouldn’t vote for Obama’s health-care bill, e) all of the above.
Massa’s a multi-faceted politician, a multi-tasker if you will because “e” appears to be the correct answer.  And it would appear “e”’s in a whole Massa trouble.
One of the weirder aspects of Massa’s perplexing predicament is the story he told about White House Chief of Staff Rahm Emanuel accosting him in the Congressional showers over a budget vote.  It gives new meaning to the intent of one politician making the other politician come clean…and it wasn’t on the floor of Congress.  At least there was no bending over to pick up the soap…that we know of. 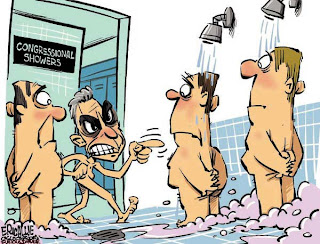 “I’m sitting there showering, naked as a jaybird, and here comes Rahm Emanuel, not even with a towel wrapped around his tush, poking his finger in my chest, yelling at me because I wasn’t gonna vote for the president’s budget,” Massa said. “Do you know how awkward it is to have a political argument with a naked man? … It’s ridiculous.”
He continued, “By the way, what the heck is he doing in the congressional gym? He goes there to intimidate members of Congress.”

Of course Emanual better be careful next time he tries to shake down a Congressman.  I can just see the encounter, “Hey, Rahm, is that your finger or are you just happy to see me?”
This post originally appeared at The Parody Files

Canadian Blend said…
If you haven't yet, track down The Daily Show's clip where Jon Stewart provides commentary of Massa on Glenn Beck's show. It's a hoot.
19 March 2010 at 09:21

Donnie said…
Rahm had better watch his ass. Masa learned tickle fighting in the U.S. Navy. I hear they have a kick ass tickle fighting team there.
19 March 2010 at 12:49

Me-Me King said…
To quote Whoopi Goldberg when commenting on the shower incident: "He's lucky all he got poked with was a finger!".
19 March 2010 at 13:18

nonamedufus said…
Me-Me: And we wonder where the expression "politics makes for strange bedfellows" comes from. Haha.
19 March 2010 at 13:28

MikeWJ at Too Many Mornings said…
After reading your post, I have a new theory about politicians like Rahm and Massa and New York's governor. I think they always had problems, and those problems stayed with them when they took office, maybe even got worse because of the stress. And then the thrill of their particular problem got even more thrilling because there was the possibility or fear of getting caught. Or something like that. I didn't say it very well. But it was a new idea, so cut me some slack, OK?
19 March 2010 at 21:32

rental mobil said…
wow great post and great advice. I tend to only read the blogs that I find interesting .
Keep posting stuff like this i really like it.
20 March 2010 at 02:15

Frank Lee MeiDere said…
To me, this shows that we may finally be getting past all the smoke and mirrors that normally accompany the political process which, at its core, has always been about who's the biggest prick.
21 March 2010 at 20:52