December 29, 2009
Boy, oh  boy, those poor folks trying to get out of Dodge on an airplane this week.  Since that Nigerian guy tried to blow up his crotch and a plane last week in Detroit Transport Canada has clamped down on security at Canadian airports.  Havoc has ensued.  Line ups, delayed and cancelled flights.  No carry-on luggage allowed.  I'd hate to be an air traveller trying to get home or get away on holidays.

The more I thought about this story, the more questions I asked myself.

Southwest Airlines picked the wrong time to go with their "all checked bags fly free" promotion.

The guy sewed the explosives into his underpants.  It gave me visions of the guy in Spinal Tap going through security with a cucumber in his pants wrapped in aluminum foil. 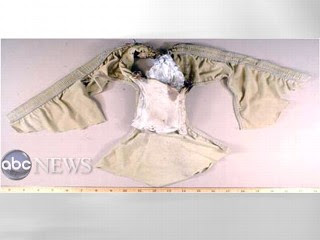 Although, now that I've seen the size of the um, er, packet of explosives this guy had little to brag about...if you know what I mean.

The guy's from Nigeria.  What's up? Did he want to teach us a lesson for not answering his e-mails?

Planes flying to the States out of Canada will not allow passengers out of their seats for the last hour of the flight.  What happens when the movie ends and everybody has to go to the washroom?  If Air Canada's smart, on top of $5 bucks for a pillow and $7 bucks for a blanket, they'll charge $25 for Heavy Duty Depends.

Those skies aren't so friendly anymore. 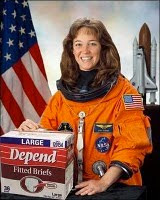 http://howtobecomeacatladywithoutthecats.blogspot.com said…
Depends... greatest invention ever in these days of heightened security! Makes the skies much friendlier.

Hey, yeah, Rochester to Ottawa isn't that far. You may net some Depends as they've shut down the gas stations/restrooms along the 401 between Toronto and Bellville
29 December 2009 at 07:59

Donnie said…
Oh brother. And Barack O'boy's head of Homeland Security, Janet what's her name, says the incident proves security measures work! Huh?! Passengers took the guy down! He's on a plane with explosives! Please explain where the "security" phase kicked in on that one Janet baby.
29 December 2009 at 09:38

Anonymous said…
@Don That would be Janet Napolitano former governor of Arizona where I hail from. I have no idea what happened when she moved to DC. No idea whatsoever. She apparently left her brainz here.

Nomie! You're havin' a New Year's party and you didn't invite MOI?

Warning: Conspiracy theory ahead! This whole thing may have just been staged to justify the billions of dollars we don't have to continue to fund the war. Can you say War Bonds? I see it coming.

nonamedufus said…
Don: The other thing they're saying about the measures working is that the they confuse travellers and therefore must confuse the terrorists. I feel safer already.
29 December 2009 at 13:25

nonamedufus said…
Quirks: They should put Tiger Woods in charge. He has some experience with Ho Land Security. What? Oh Home Land Security! Well how about that pilot that downed the plane full of people on the Potomac? Yeah and they can rename it Plane Land Security.

MikeWJ at Too Many Mornings said…
What I love about this story is that the talking heads keep saying he suffered severe "leg" burns. Looks to me like it was a little worse than that.
29 December 2009 at 18:13

injaynesworld said…
If God had wanted us to fly he'd have stuck feathers up our asses...

If this guy was a "trained" terrorist then clearly Al Queda's educational system is almost as bad as ours.

nonamedufus said…
Jayne: Good points. Love the one about the feathers.