December 04, 2009
Alex Keaton's mother is a lesbian? I should have seen it coming. After all, she was a latter day reformed hippie and PBS volunteer and supporter. I wonder if Alex saw it coming. How did he take the news? Me? I was flabbergasted. I'd been in love with Meredith Baxter going back to Bridget Loves Bernie. I still thought she was hot in Family Ties. Hell, everyone I knew wanted to have her...for a mother. And this week she told the world she's changed teams. She's a lesbian. Damn. What's the world coming to? 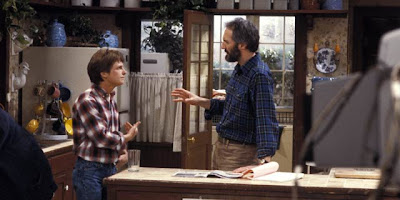 Alex, there's something you need to know about Mom...
I make light. Of course the choice of who she chooses to love is hers. That's fine. And I wish her much happiness. But it is just one example this week of several incidents that gave me pause.
Seriously, there were some things that occurred this week that moves us to ask ourselves just what the hell's going on around us when our idols disappoint us and let us down. Stranger still is the fact there are others waiting in the shadows, anxious to follow in their misguided footsteps.
Let's deal with the elephant in the room up front...or the Tiger. Here's a hero we all hold on high and marvel at his accomplishments. But, seemingly, all his trophies weren't enough for him. He needed more. And now that the news is out, despite his best attempts to keep things quiet, the vultures are circling. But, hey, it's the price a sports figure, a politician, an actor, a billionaire pays for coveting such a lifestyle. It didn't just fall into their lap, by accident. These people worked hard to get to where they are. And then they seemingly let it all slip away in a moment of "transgression". 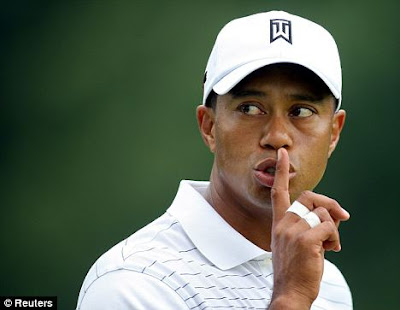 His driver no longer a best-kept secret
As sad as this is, what's worse is the next tier of wanna-be celebrities. Jon and Kate, the Balloon Boy Family, the White House Party Crashers. What in God's name possesses these people? Where did they ever get the misguided notion that anybody else would be interested in their exploits...their so-called 15 minutes of fame?
Are we to measure someone's worth by "what they can pull off" over what they have "accomplished".
We have set a new standard, ladies and gentlemen. And it seems the guidepost unfortunately is the amount of air time on TMZ, Entertainment Tonight and Extra.
Sad. Very sad.
Excuse me now. I'm meeting Mary Hart at a state dinner being thrown by the Governor General that I haven't been invited to.

Anonymous said…
You and me both Noname!

It seems with all that extra wealth, rationalization comes much easier!

And it's still hard for me to believe that Ms. Birney plays for the other team. Although she never turned me on, but I suppose that's cuz I don't play for that team.

Moooooog35 said…
I'm trying to get some pictures with the White House crash people...pretend I'm, like, their lawyer or something.

MikeWJ at Too Many Mornings said…
Wait, you're not implying that Mary Hart's a lesbian, too, are you? Because I don't think I can handle that news on top of all the other crap I've been hearing for the last week or two. Is there nothing that actually is what it seems to be anymore?
4 December 2009 at 14:34

Me-Me King said…
Wow, I had my comment all ready then I saw Don's tidbit of the day. Talk about strange. I never knew that about Hazel and Carole, being mother and daughter. Amazing! I wonder, was Hazel a lesbian? Aside from an occasional bowling date with the butcher, she pretty much hung alone. Uh, oh, there I go again, confusing fantasy with real life.
4 December 2009 at 19:52

nonamedufus said…
Me-Me: You've got a better memory than I do. I thought the Brady housekeeper Alice dated the butcher. Now Mr. Brady...gay.
4 December 2009 at 20:47

Sorcerer said…
hey..loved that hilarious writeup..
you are right on what you said

wel..Hope to see you walking with some hot chick on the media..as they show you in super slow motion...

http://howtobecomeacatladywithoutthecats.blogspot.com said…
I was a bit disappointed with Meredith's "revelation". (I was expecting something involving ax murderers or child molesters with all the hype they gave it on the Today show.) In this day and age, it just didn't seem like a big deal to me one way or another. She's always seemed like a classy lady to me and I still consider her a classy lady.

Sorcerer said…
hey..loved that hilarious writeup..
you are right on what you said

wel..Hope to see you walking with some hot chick on the media..as they show you in super slow motion...