You're Having A Bad Decade

December 08, 2009
Oh man.
Imagine this guy.
Do you remember Daniel Powter?
Name sound famiiar?
He's a Canadian. (sorry) He calls Vernon, British Columbia home.
He had a huge hit record in 2006.
He made the rounds of all the talk shows performing his song.
It was used to bid adieu to departing American Idol contestants.
And that golden yardstick of success known as Alvin and the Chipmunks performed his song in their movie. You know what it was called? "Bad Day". Yep, and now like a self-fulfilling prophecy Daniel Powter's having a bad day.
Turns out, Billboard has named Powter as their one hit wonder...of the decade. Yeah. Not of the year. Of the freakin' decade!
What a downer. Well he only has himself to blame. Take a look at the song's chorus:
Because you had a bad day
You're taking one down
You sing a sad song just to turn it around
You say you don't know
You tell me don't lie
You work at a smile and you go for a ride
You had a bad day
The camera don't lie
You're coming back down and you really don't mind
You had a bad day
You had a bad day 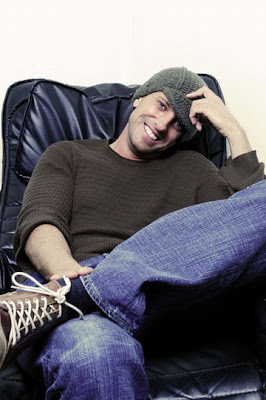 Powter, on a good day.
Oh, man. Talk about a bummer. No wonder he's a one hit wonder. There's just no topping that in terms of despair and depression.
Daniel Powter. Remember that name. He not only had a hit with (You Had A) Bad Day. But he has the dubious distinction of turning a Bad Day into a bad decade!

Moooooog35 said…
That's one more hit than I've had.

Donnie said…
There were a lot of his type...one hitters. Seems like the 60's and 70's surely had their share. Imagine that your only claim to fame is one lousy song and singing karaoke in some sleaze bar on Tuesday nights and singing that same lousy song over and over. Just shoot me!
8 December 2009 at 09:39

Anonymous said…
I always hated that song. Still do. So he's still "bad" in my book and will be for a long, long time. Or until the zombies arrive.

nonamedufus said…
Don: But how ironic a song called Bad Day would be voted one hot wonder of a DECADE. Now that sucks!
8 December 2009 at 10:04

nonamedufus said…
Quirks: Yeah, he might have done better with Good Day, although I guess the super optimistic songs have been done already, Sunshine.
8 December 2009 at 10:05

Me-Me King said…
What a buzz kill to have your one and only hit covered by Alvin and the Chipmunks. Hopefully he made out with the royalties.
8 December 2009 at 14:48

Chris said…
Yeah, he's having a bad day all the way to the bank, I'll bet. The royalties from American Idol and the Chipmunks alone probably made the dude a millionaire.
8 December 2009 at 16:13

nonamedufus said…
Knucklehead: Yeah, but the guy's severely tainted. I mean loser of the decade? It'll take a "Yesterday" to come back from that!
8 December 2009 at 16:24

MikeWJ at Too Many Mornings said…
I think me and Powter could be best friends. Or brothers from different mothers. Or honorary members of the Life's Loser Club. Or whatever. Nobody cares, actually.
8 December 2009 at 19:11

Moooooog35 said…
That's one more hit than I've had.