I Know What Happened To Baby Jane! 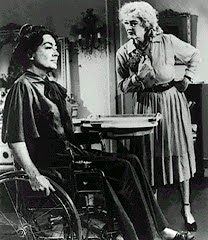 Remember that campy horror film from the early 60s, "What Ever Happened To Baby Jane?" Well, I think I know. I read an article yesterday that made me laugh but it made me shake my head at the same time.
It had to do with a woman in Dartmouth, Massachussetts who strangled her nursing home roommate to death. That sounds pretty tragic doesn't it? Nothing to laugh at.
But it turns out the strangler was 98 years old. The stranglee was 100. Wha? That's how I reacted. I did a double take. I backed up and read the article a second time.
It seems the younger(!) of the two women thought the other one was "taking over" their room. And she taunted her older roommate about soon getting the bed by the cherished window because she was going to outlive her. I guess she knew something the other woman didn't.
Now, it strikes me that someone - a family member, nursing home staff, somebody - would have seen trouble brewing. After all, the two had been roommates for about a year. But no, according to all everything was tickety-boo.
Now if she goes to jail, first of all I wouldn't want to be her cell mate. And if I were I'd be damn sure to offer her the bottom bunk. But more to the point, I wonder when the hell she'd get out. In 20 years with time off for good behaviour?
The victim's son has said that prosecuting her would be like prosecuting a 2 year-old. This of someone who wrapped a plastic bag around her victim's head and waited for her to stop breathing.
I don't know but I think it's time we updated that generational rallying cry from the 60s: "Don't trust anyone over 90!" 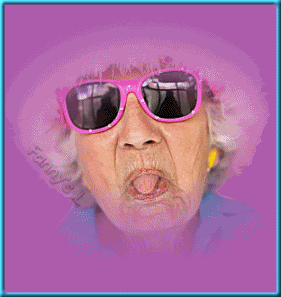 Unknown said…
Geez, Dufus- You're right! It's Baby Jane and Blanche for sure! And heaven forbid folks in the Nursing Home didn't appreciate her impromptu rec room musical performances during arts and crafts time.

I imagine a few of those less-entertained audience members might have met with an early death, too.

I love "campy horror" movies and I love "tickety boo."

Whatever happened to Baby Jane? I loved that movie! That's the movie that instilled in me the fear of wheelchairs. And stairs.

nonamedufus said…
Don: Oh, man lol. Is there a death penalty in Massachusetts? Sounds like an appropriate punishment. She should know crime'll get ya in the end!
14 December 2009 at 11:42

nonamedufus said…
Jenn: It was the first thing I thought of. Weird, huh? Some people will do anything to get the bed by the window.
14 December 2009 at 11:44

nonamedufus said…
Quirks: You'll appreciate this. The two leads feuded off screen as well. According to IMDB, during the making of the film Bette Davis had a Coke machine installed on the set to piss off Joan Crawford who's late husband had been CEO of Pepsi.
14 December 2009 at 11:51

Me-Me King said…
Holy moly! My grandmother's nursing home roomie used to steal things from her. The day the roomie had one of my grandmother's wigs was the day all hell broke loose. Apparently, my grandmother called her a bitch during the confrontation. This prompted the nursing home to call my mother. The solution: They moved the little thief to a private room and my grandmother ended up with the bed along the window.
14 December 2009 at 13:02

Skye said…
Oh man, I've seen some interesting stuff in my time, but this story takes the cake! I love Don's solution with the vinegar enema, that aught to take some of the crap out of the Ole gal...lol.
14 December 2009 at 17:08