Just What The Doctor Ordered

December 18, 2009
The other night my wife and I were partaking in our favourite nocturnal activity. No, not THAT one. We were watching TV. We were glued to some mindless drivel when a commercial came on. Now normally we reach for the remote and turn down the sound because the volume level of commercials must be 10 times louder than the shows we watch. But we weren't quick enough and we began watching an ad for a smoking cessation product.

I quit smoking about 15 years ago, after several unsuccessful attempts over the close to 30 years I puffed those cancer sticks. I started at 11 or 12 years of age and asked my smoking parents for permission to smoke when I was 13. I think they were disappointed, but what could they do? After all they already stunk up the house, the yard and my lungs. The best way my Dad could put it was "I'm giving you my permission but not my acceptance." And so 30 years of going from a social "with-it" to being a social "misfit" - a real piranha at the end - was underway.

So that's my story, and the time I quite for good, I quit cold turkey - no aids, no drugs, patches or hypnosis. 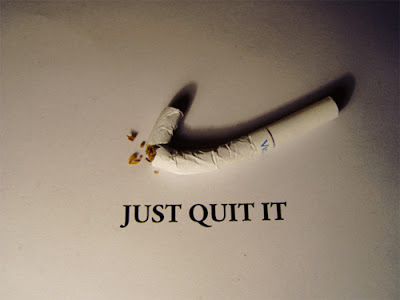 Now here's the kicker. This commercial almost made me want to start again. Why? Because the side-effects from the product sounded more health threatening than smoking.

The commercial starts off innocently enough. A former puffer, with just a hint of smoker's throat and yellowing teeth talks about how much he used to smoke, how he quit and how long he's been off the wicked weed. Indeed he swears by the product and recommends the product to us.

But the majority of the commercial spends its time warning of the side-effect. It tells the viewer, words to the effect, that if you, your family, or caregiver notice agitation, hostility, depression or changes in behaviour, thinking, mood that are not typical for you, or you develop suicidal thoughts or actions, anxiety, panic, aggression, anger, mania, abnormal sensations, hallucinations, paranoia, or confusion, stop taking the drug and call your doctor right away.

See what I mean about just keeping on smoking? I never experienced those side-effects when I was a smoker! Hell, I could be healthier if I started again. 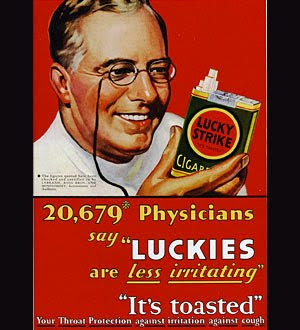 injaynesworld said…
When I was 14 my mom put a carton of Spring cigarettes in my Christmas stocking. True story. This was back in the post-surgeon-general-warning days (yes, I'm that fucking old) when the worst that was thought about smoking was that it made you look cheap. Personally, I think I was just such a rotten kid that she was trying to off me early.
18 December 2009 at 12:35

Me-Me King said…
Because I keep my TV on all day (and night), I hear a lot of commercials for prescription drugs. The list of side effects are always alarming. There is one drug for Restless Leg Syndrome that may cause an excessive urge to gamble, an unusual appetite for sex and then, of all things, it may causes hallucinations. Hmmmmm.
18 December 2009 at 12:37

Chris said…
I've never smoked, and as a result, I can't imagine what the attraction is.

nonamedufus said…
jayne: A cigarette called "Spring". Boy advertisers/cigarette makers thought we were really stupid. Why not call them "This'll Rip A Hole In Your Throat" and be done with it.
18 December 2009 at 13:25

nonamedufus said…
Me-Me: Hey some of those side effects sound interesting - kinky - yet, interesting.
18 December 2009 at 13:27

nonamedufus said…
Knucklehead: Yeah something tells me you'd want to avoid that if at all possible.
18 December 2009 at 13:28

Donnie said…
Half the world experiences those symptoms without any help from cigarettes or cessation. If somebody is experiencing a couple of those symptoms, I just assume they're having a normal day. Sheeesh!
18 December 2009 at 13:53

Not a smoker never have been, but my dad put away a carton a day. Well not really, but it seemed like it.

Actually he was drunk too and he never had suicidal tendencies, although he did drink himself to death. He was just too drunk to know it!