May 27, 2009
If you had to identify the one thing that truly unites Americans with their northern neighbours, what would it be? The right to life, liberty and the pursuit of happiness? How about McDonald’s, Arby’s and Kentucky Fried Chicken? Or maybe it’s that we’re both great democracies? You’d have to be unpatriotic – or an illegal alien – to disagree with that but no that’s not it. Maybe it’s that each of our economies is in a tailspin? Or that we share the world’s longest undefended border? Nope, sorry, it’s none of the above. What really unites Canadians with their American brethren (and sistren) is their love of beer!

Tall-boys, stubbies, quarts, pints, cans, kegs or out of a tap, the nectar of the gods comes in many forms, shapes and sizes.

Now Canadians may hold their beer in a stein but they also hold it in high esteem. And they have a very distinct view of the quality associated with American beer.

Canadians may be known for their politeness and reserved nature but when it comes to their opinion of American beer, they simply can’t hold back. Not to put too fine a point on it, they think it tastes like swill. And they think when they drink it, owing to a) the distinct lack of alcohol compared to Canadian beer and b) it’s ability to pass through you quicker than spruce juice through a goose, they spend far too much time going to the bathroom. Yep if it weren’t for American beer we wouldn’t have that age-old maxim “You don’t purchase beer, you only rent it!” More importantly it has a lower buzz quotient. Yeah, you’ve got to drink many more in order to get your freak on.

Alas, it’s the Americans who have the last laugh on those uppity Canadians. You see Molson and Labatt’s - Canada’s largest breweries - are no longer, well, Canadian. Molson is owned by Coors , Labatt’s by Anheuser Busch.

But Canadians can rest easy. If all else fails, we still have Canada’s #1 favourite beer... 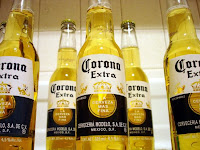 Chris said…
Come on, Dufus, Canadian "beer" is basically hop-enhanced moose piss. Or maybe it's taken from hopping mooses (meeses?). At any rate, when it comes to beer, Canada is about the last country I'd have ship it to me.
27 May 2009 at 14:55

nonamedufus said…
Doug: Yeah, I better bring my own.

Chris: Ironically, the largest remaining "Canadian" brewery is called Moosehead.
27 May 2009 at 15:22

Anonymous said…
What about making your own?

Anonymous said…
What about making your own?