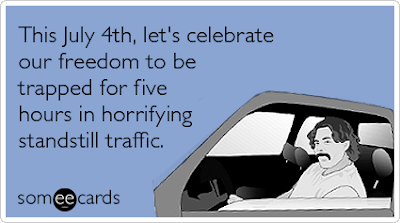 Here in Canada we celebrated Canada Day, our version of Independence Day on Friday, the 1st of July. This year's celebration included a visit from Will and Kate, the Duke and Duchess of Cambridge. Canadians in Ottawa went ga-ga, camping out on Parliament Hill overnight to catch a glimpse of the royal duo. Now I might do such a thing for U2 tickets but for these two? Then of course, I'm not a staunch monarchist and I shudder at the thought of the cost of royal visits.
But dear Kate, not an unattractive woman, has rekindled my interest in the monarchy. Oh, yeah. And Kate, in turn, has rejuvenated the fashion industry. Really. It's all because of her fascinators. What is a fascinator you ask? Well it's not a bra that separates and lifts. Nor is it a tummy tucker to enhance a woman's figure.
Now I'd never heard of a fascinator until I watched some of the royal tour coverage last week. It's a hat. Uh-huh. Or at least part of one. And in Britain, the Queen has decreed they must be worn to gain entry to the Royal Ascot, a horse race named after another article of clothing.
I don't know why it's called a fascinator. Does anybody know? I don't find it particularly fascinating. I mean, take a good look. It's like wearing a dead plant on your head. 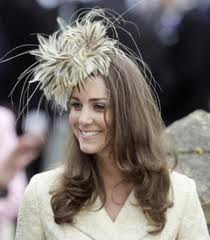 Fascinating Kate
Maybe because you need a whole lot of fasteners to wear one? Yeah, I got the spelling wrong. It's a fastenator!

Cheryl P. said…
I find the whole obsession over her fashion sense as....fascinating...no thats not it...interesting...no that isn't the right word either...how about bizarre. Yeah, thats the word. Every news clip is drolling on and on about her outfits, her shoes, her handbags and her hats. Really the cost of that trip is in the millions and everyone is glued to watching for what dress they need to run out and buy a copy of.
4 July 2011 at 13:15

00dozo said…
Although it isn't overly unpleasing to look at, it kinda resembles a hairball from a peacock.

nonamedufus said…
You're talking about fashion to a guy that wears summer shorts and a t-shirt every day?
4 July 2011 at 14:08

quirkyloon said…
I wear a fastenator, it's called a bobby pin! (Sans hairballs.)

She's a beauty, but that fastener does NOTHING to enhance her beauty. But then again, she doesn't need to enhance it.

nonamedufus said…
That one's nothing. Look at the maple leaf one she wore on Parliament Hill on Canada Day...

nonamedufus said…
Yeah, Kate's alive. Ok bad taste. Speaking of which what did you think of that Newsweek cover?
5 July 2011 at 17:16

SP said…
I am not outraged about the Newsweek cover. But, Diana had some innocence and was a natural beauty before she turned all glamorous. Kate is all plastic. And I cannot stand that thing called Pippa...

nonamedufus said…
As a political journalist I covered a royal tour by Charles and Diana in the early 80s. She was very quiet yet charming. Kate has big shoes to fill but here in Canada she seems to have attracted much admiration. For my part, I'm not a big fan of the monarchy and it's role in Canada. We should be way past all that by now. The idea of a British commonwealth is an outdated one.
5 July 2011 at 18:18

SP said…
Political journalist... nice. A job I would love to have!!
Diana had lots of charm and down to earthness. Something I think Kate the commoner lacks.
After Diana and Charles everyone learnt not to believe in fairytales on face value :) Big difference between a 29 yr old mature Kate vs a 22 yr old mature Diana.

I agree there is no need for a British monarch to be head of state in Canada, Australia or NZ.

British Commonwealth is like the Non-alignment Movement these days-no one cares!
No one watches Commonwealth Games anymore. India screwed them up the last time big time:)
5 July 2011 at 18:58