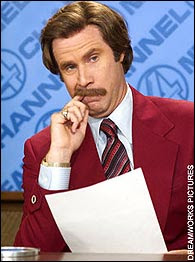 Not too long ago, CBC Newsworld, an all-news, all-the-time television network - kind of like Canada's answer to CNN - went through a significant re-branding exercise. It emerged from this exercise with the name CBC News Network (duh) and it replaced all it's serious and sonorous and middle-aged male announcing staff with young, perky, perfectly coiffed and brightly dressed females.
They also implemented short catchy musical stingers and equally brief visual bumpers to transition viewers from one article or segment to another.
Making the transition complete was a big bright studio awash in soft hues of red and blue. Well, the transition was almost complete. The coup de grace was the removal of all the chairs in the studio. That's right. The anchormen, er, ah, make that women, would now stand to deliver the news. 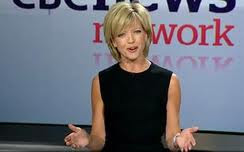 I'd watch that!
Alas the changes, to many, turned what once was a staid and dependable source for a traditional approach to journalism into more of an Entertainment Tonight or MTV approach to the news. Some liked the change. Some didn't. Regardless, all saw it for what it was: an attempt to attract a younger viewer with a fuller wallet. This would entice advertisers to spend more to air their commercials on the public broadcaster. Ah, yes, CBC News Network is publicly funded, not unlike PBS in the States.
Did it work? Well you tell me. I tune in every morning for an hour or so to catch up on what's going on in the world. In that time, the self-proclaimed relevant and hip news source for Canadians aired the following commercials:
- an ad for the Acorn Stairlift that aids seniors with mobility problems to get up and down the stairs in their home in a moving chair
- an ad for CHIP, Canada's Home Income Plan that provides reverse mortgages for senior homeowners
- an ad for Comfort Bathing that promotes walk-in bathtubs for seniors
- an ad for Tena Adult Diapers to help with "bladder leakage" problems for those in their senior years
If I'm supposed to be gettin' down, gettin' it on or gettin' jiggy with the news, then why am I feeling so damn old? 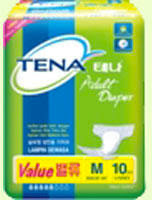 Melissa Hicks said…
Ok, so maybe that didn't lure in the younger viewers, but don't you feel just a little peppier as you walk down the road to death?
16 June 2011 at 10:56

Linda Medrano said…
I like the updated look. But think they could go a step further and advertise new "Trojan" products with ribs and stop with the "viagra" ads too.
16 June 2011 at 10:58

nonamedufus said…
That's just it. Most of these products are for people who have mobility problems. That's what I'm well on my way towards?
16 June 2011 at 12:05

nonamedufus said…
Yep, Viagra's another one. I think they're going for a rise in their viewership. Heh, heh. How do you know about CBC News Network? Do you get them on satellite or something?
16 June 2011 at 12:08

Cheryl P. said…
Is the CBC News Network not paying attention to how well the cute younger female anchors have worked out in the US? Katie Couric couldn't get the ratings up after five years of trying and is being replaced by Scott Pelley. Diane Sawyer is holding her own but still trailing Brian Williams on NBC. Diane is 65 years old so she wasn't meant necessarily to target younger viewers.
The major networks here keep talking about wanting to capture the younger viewers but the exploding segment of the population is the Baby Boomers and we have cash. Cash to buy the products they are trying to sell as you pointed out. And as Melissa Hicks very funnily (that might not be a word) pointed out, we might want to start spending our money as we only have a limited time to spend it. (sorry nonamedufus, didn't mean to point out the limited time frame concerning our age, as it might depress you)
16 June 2011 at 13:12

nonamedufus said…
So what are you saying? I have years to go yet as a dirty old man? Boy I'll bet he single-handidly keeps Viagra in business. Well not single-handidly exactly, still with women. I think.
16 June 2011 at 15:09

00dozo said…
We don't get CBCNN (?) here and the only Canadian channel we get is just regular old CBC. I do like, however, "The National" broadcast, not only for its national news but its international content as well. Oh, and Mansbridge's voice - so 'velveteen', like Lloyd Robertston's was.

Personally, I don't think the younger demographic watches much televised news - they are too busy texting, Twitting or whatever so I doubt those 'old-timer' commercials aren't really hurting the Network. IF you think about it, they just remind you to pee before going to bed.

nonamedufus said…
Lloyd Robertson? He'll never attract a younger audience. He's the walking dead! The younger demographic is on Twitter and so on, yes, but also getting their news from such people as John Stewart and Stephen Colbert.

Mansbridge was "discovered" when he announced flights in an airport in Northern Ontario. He's come a long way since then.
16 June 2011 at 21:43

quirkyloon said…
Ha! I think Melissa is onto the truth.

Let me add: because people (not you) don't want to HAVE to age gracefully, they want to be like dumped Hugh Hefner surrounded by youth and beauty so they can fool themselves that they still gots it!

AND... I'm not a senior and I have leakage problems. Is there an app for that?

Melissa Hicks said…
If depends were ribbed for my pleasure, I don't think I could wait to get in them. Seriously, advertising them with "pleasure nubs" might be a better way to haul in the younger viewers.
17 June 2011 at 13:58

nonamedufus said…
I don't think there's anything out there, really, that could enhance the experience of peeing my pants. Of course if they came with "magic fingers" that might be something else altogether.
17 June 2011 at 14:09

nonamedufus said…
I'll tell you something funny, Quirks. Well, if not funny, odd. Before I had chemo and radiation last year my hair was white. After my hair grew back in it wasn't white at all but the same brown/reddish colour of my youth. I tell my wife I'm Benjamin Buttons. She says "You're no Brad Pitt, believe me". *Sigh*
17 June 2011 at 14:13