June 27, 2011
Back in the days of my youth I wasn't always the most erudite of people. I know, to look at me now, that's difficult to fathom. But, alas, it's true. My mom would say things like, "Don't forget it's your night to wash the dishes" to which I'd reply "unhh". Or "If you don't clean up that room of yours soon those dirty clothes are going to start walking by themselves" and I'd respond "unhh".
I know. Hard as it is to believe as a teenager I was a grunter. Yeah, that's right. To anything said to me by someone in authority (older than me) I'd simply respond with that universal, mono-sylabic definitive statement of youth everywhere..."unhh".
Now at some point I grew out of this habit. Well at least in public. To this day I'm a bit of a grunter in the bathroom. But that may be a little too much information.
Elsewhere, though, in recent years grunting has become a growth industry. What used to be a term used to describe military infantrymen, grunts now refers to hard-playing, overly expressive tennis players, especially women. The Williams sisters, Anna Kournikova and all the rest. Sometimes if you close your eyes watching tennis sounds orgiastic. I confess, I watch tennis a lot. 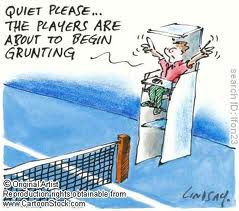 Now, your humble correspondent has covered tennis in the past, commenting on women's revealing tennis fashion and men's colourful attire. Now while these player fashion faux pas may have elicited gasps it's the players themselves who are responsible for grunts.
Last week, after Belarus' Victoria Azarenka's grunts registered an ear-spliting, faux porcine ninety five decibels, tennis officials said enough's enough. Obviously ninety five decibels is exactly that...enough. They'll now allow opposing players to complain to the umpire about grunts if the practice becomes too distracting. 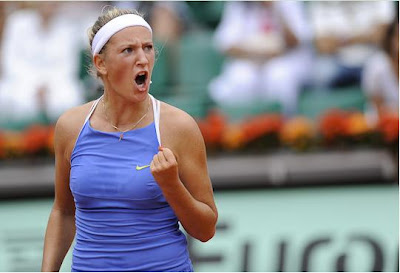 Biggest grunt in tennis.
I find this a sad development. Many finals have evolved into grunt-offs. And watching tennis has become quite an arousing experience. These days when I watch tennis I'm reminded of that famous line from "When Harry Met Sally" when, in a restaurant, Sally demonstrates to Harry how easy it is to fake an orgasm. After which the lady at the next table tells the waiter "I'll have what she's having".
Imagine how Azarenka interacts off the court. For example I'd hate to be the one taking her order at the McDonald's drive-thru:
"I'll have a Bic Mac" *95 decibel grunt*
"Large fries" *95 decibel grunt* "And a large diet coke" *95 decibel grunt*
Although, I must say at ninety five decibels the folks I really feel sorry for are Azarenka's neighbours. I'll bet they don't get a wink of sleep at night. 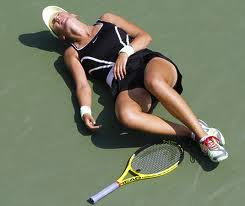 Laughingmom said…
I tend to turn the sound off when watching the games because of the grunting, unless of course it is in sync with mine.

MarcyTooTimid said…
It has gotten pretty out of control among the women! I have heard, too, that some of them don't grunt during practice matches, which indicates that it could just be for show or to distract their opponent.
27 June 2011 at 12:01

quirkyloon said…
What? You grunted as a youth? Then there's hope for my 13 yr old grunter! Yay! And I agree with MarcyTooTimid, it has gotten out of control.

I mean come on now. I think they are subconsciously just grunting at each other. "Oh yeah? Well not only will I win this game but Ima gonna grunt louder than you!"
27 June 2011 at 12:16

00dozo said…
I sort of stopped watching tennis because the grunting was getting quite out of hand. But 95 decibles out of one of her orafices? I wouldn't want to hear what comes out of her other end. It might just sound like those deafening blasts made by the aliens in "War of The Worlds".

nonamedufus said…
C'mon, grunting is the universal language of youth down through the ages, starting with caveman kids. Really.
27 June 2011 at 12:30

nonamedufus said…
Are you kidding? I've never watched more tennis in my life. It's every guy's dream to watch two women grunting.
27 June 2011 at 12:37

Carrie Meadows said…
My mother would blame Martina for starting all this grunting. She was a grunter, and they've all been grunting ever since.
27 June 2011 at 14:34

nonamedufus said…
Oh, yes. There's nothing attractive about men who grunt. For men grunting is best kept behind the bathroom door...unless, while watching some sporting match on TV, you're responding to the wife about doing some work around the house.
28 June 2011 at 12:03

Melissa Hicks said…
This tennis comment reminds me of something vaguely related. When I had my son the doctors asked me to be quieter because I was scaring the other patients. I think heavy physical effort requires grunting. If she really wants to be distracting, the line is "It's trying to kill me from the inside."
28 June 2011 at 15:49

nonamedufus said…
That would definitely be distracting. I tell ya, though, I think the miracle of childbirth is a fine excuse for a grunt or two.
28 June 2011 at 18:03