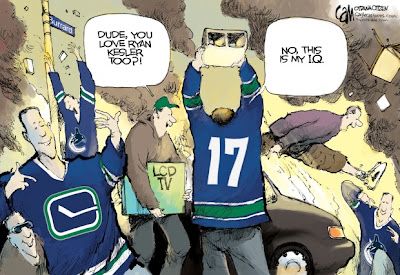 What the hell was that all about? Last week The Vancouver Canucks lost game seven of the Stanley Cup series. They were well on their way to losing it when I went to bed after the second period. Imagine my shock to learn the next morning that not only did they lose the game but their fans went nuts in the streets of Vancouver.
Some said it wasn't so much hockey fans as anarchists who seized the opportunity to turn the crowd to their agenda of violence and destruction of property. 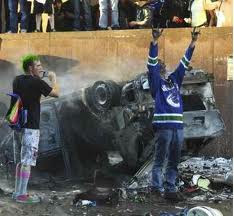 The televised images seemed to be from a far off middle eastern land. But wait, no, the backdrop was downtown Vancouver. There were bonfires, cars overturned and let on fire, fighting, looting, riot police. It was as if a nation's citizens had gathered to demonstrate against an undemocratic regime. But this was Canada. And the demonstration was about losing a hockey game.
I was dumbfounded. And as the images of the riot were broadcast worldwide, it was a deeply sad moment to be a Canadian.
But later, on the day after, those images were replaced by those of other people from Vancouver who had descended on downtown Vancouver not to continue the riot but to roll up their sleeves and clean up the mess left behind by the miscreants. These images were heart-warming. And in taking back their city, they condemned the violence. 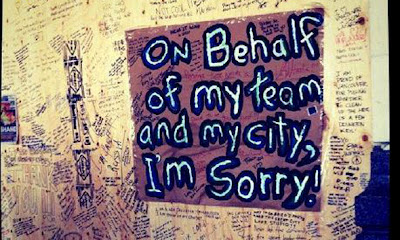 A curious image, captured in the midst of the post-game violence was one of a kissing couple. As the image went globally viral interpretations of what the image meant varied. But in truth, the girl had been accidentally knocked down by a policeman's shield. Her boyfriend was trying to comfort her. 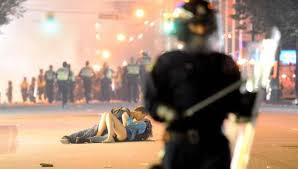 This and the "clean-up" images went a long way towards redeeming Canada's image world-wide. But time will only tell if the images of the violent melee in downtown Vancouver will ever be erased from the minds of Canadians.

Bernadette Callinan said…
it must have been awful!
how to explain to kids?
the cleaneruppers are awesome,i think the gooduns outnumber the bad in the end.
a woman from perth,claimed the kissing boy is her son.
20 June 2011 at 09:57

quirkyloon said…
Ah! You see if that had happened in the US the people would've waited until the area had been pronounced a disaster then they would've impatiently waited for FEMA to show up with their water bottles.

So I give a HUGE THUMBS UP to Canadians.

nonamedufus said…
Yeah, I think in the end the folks that pitched in to clean up may have countered the images from the night before. The guy is Australian, apparently. He and his girlfriend were just in the wrong place at the wrong time.
20 June 2011 at 10:50

nonamedufus said…
I've kinda gotten numb over the years to demonstrations at world leader gatherings like the G8 and G20. But for heaven's sake, rioting , looting and burning over the outcome of a hockey game? What the heck is wrong with some people? I wonder how bad it would have been if the Canucks won.
20 June 2011 at 10:55

nonamedufus said…
There were some fans who participated, sure. But I think the whole thing stated by those with an entirely different agenda that had little to do with sports.
20 June 2011 at 14:23

nonamedufus said…
There were some fans who participated, sure. But I think the whole thing stated by those with an entirely different agenda that had little to do with sports.
20 June 2011 at 14:25

00dozo said…
To be honest, I thought it would have been a lot worse with the amount of people there. Sadly, though, there are groups of thugs that go to these overcrowded events for the mere purpose of enciting rioting, violence and looting (yeah, Toronto's G20 summit comes to mind - I do believe they did discover one rather organized group in Toronto).

I was also ashamed to hear of the riots but proud to know that there are more stand-up Canadians than mindless assholes.
20 June 2011 at 14:25

nonamedufus said…
There were indeed many mindless assholes. But I agree with you on those who cleaned up up the next day. There were also many who tried to prevent the looting and the tipping of cars. Many of them women! Here, here.
20 June 2011 at 14:31

00dozo said…
"There were also many who tried to prevent the looting and the tipping of cars. Many of them women! Here, here."

Not to make light of the situation, but have you ever been to a game with 'hockey moms'?

00dozo said…
Heh, heh. Seriously, I was at one of my nephew's games and a hockey mom's son got "2 minutes in the box". She called the referee a 'fucking asshole", or something like that. But the word "fucking" was quite resounding in the sparsley populated arena. Thankfully I didn't have a mouthful of beer at the time - my uncle would have been rather pissed off, if not wet.

nonamedufus said…
I don't think they've changed all that much. My kids didn't play hockey but I did as a kid. I recall checking some kid into the boards after the whistle. Turns out that's right where his mom was standing. She leaned over the boards and shrieked "Penalty, penalty, hey ref, penalty." I think I checked the wrong person.
20 June 2011 at 15:00

Cheryl P. said…
It is a shame that these incidents of mob mentality keep happening world wide. I don't fault the Canadians. As in any of the other riots whether it is U.S, Brazil or Argentina and any number of European countries that have had these riot outbreaks, it only takes a bunch of trouble makers to "start the flame" and then a whole lot of idiots feel the need to "fan the flames"

nonamedufus said…
That was the great thing in all of this, Cheryl...the people that tried to put things right. Even more importantly, it at least got media coverage equal to those doing the damage in the first place.
20 June 2011 at 15:22

Jayne said…
I was really shocked about that, too. I somehow expect more from Canada -- a higher level of civility from a country that has universal health care. That was really sad.
20 June 2011 at 21:15

nonamedufus said…
American news outlets reacted similarly wondering just what was going on with those docile, polite Canadians. That kind of coverage was somewhat laughable. It's interesting the view the world, or Americans at least, have of us.
20 June 2011 at 21:52

Sandra said…
Well, they were expecting this after all. The city had boarded up the windows of some of the businesses. I wasn't surprised, and honestly, I thought people were getting more philosophical than necessary. It's happened in other Canadian cities, and it happens all over the world. Clearly, people look for any reason to blow up cars in the street.
21 June 2011 at 19:32

Nicky said…
I was surprised as well. Not that it happened, after all, it's happened in Montreal (and I'm ashamed to say, more than once) but I was surprised it happened in Vancouver. With a reputation for being hippy tree-huggers, Vancouver was the last place I expected to see rioting, looting and so much mindless destruction.
21 June 2011 at 19:37

nonamedufus said…
Yeah it's happened in Montreal and it's happened in Vancouver at both the previous cup finals and the G8. But this riot seemed slightly over the top. I agree it was at odds with the image many have of Vancouver, as the attached editorial cartoon demonstrates.
21 June 2011 at 20:03

Sharyn said…
Could. not. believe. this. This kind of thing happens in connection with soccer in Europe but Canada? I never knew there even WERE thugs in Canada.

The New York Times wrote that the couple were kissing. Is it true that she'd been knocked down? Seems more likely to me.
21 June 2011 at 20:38

nonamedufus said…
Wait you're getting Vancouver and Toronto mixed up. Toronto's the only place in Canada where the leafs fall every spring.
22 June 2011 at 13:31

nonamedufus said…
The story goes that the girl was knocked down by a policeman's shield and her boyfriend kissed her to try to comfort her. They'd been at the game and apparently got caught in the middle of a demonstration. The guy's from Australia and works in Vancouver as a bartender. Apparently the photographer didn't realize what he had until his editor chose that photo to publish. Imagine. That pic went viral around the world. His family in Australia saw it on the internet.
22 June 2011 at 13:35