I Pooped In A Hat

Let's see - a week of radiation followed by a stem cell transplant.

Two weeks in the hospital.

You know, the radiation treatments were two hours a session, twice a day, for four days. I was in and out of that claustrophobia-inducing gadget more than a drunken rabbit on a viagra overdose. 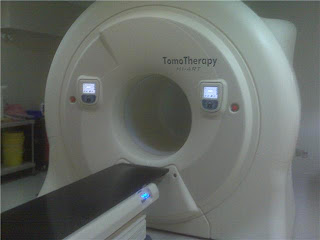 Machine with which I had an intimate relationship.
Then I was admitted to the hospital because I had a fever. The doctors were worried about infection. Little did I know I'd be there for two weeks.

Too much time in a hospital can play tricks on your mind. For example, I kept wanting to call the disembodied voice at the other end of the call-button "Base Commander". Must have been the drugs - or that I'd loaded up on several seasons of Battlestar Galactica before my stay. I resisted the urge.

And I loved it when the nurse would come around at 11pm after I'd fallen into a deep sleep at 8pm to tell me "Time to wake up and take your sleeping pills."

The weirdest thing that happened had to do with a little case of constipation. The nurse gave me some "special" pills and told me "We're gonna give you a hat that we want you to use when you go to the bathroom". And I thought, "Now why would I wear a hat sitting on the toilet?"

Turns out this is a clear plastic affair that sits on the back of the bowel to catch your "sample". Hospitals love samples: blood samples, urine samples and, yes, pooh samples.

After several days, victory was mine. And I was able to push that call-button and proudly announce, "Base Commander, I have pooped in your hat!"

Anonymous said…
Yay for you! So glad to see you back Nomesters!

Donnie said…
Glad to have you back and still in good humor. Hope you're feeling a lot better...poopy hat and all. I actually fell asleep in an mri machine once. No sleeping pills necessary.
13 May 2010 at 10:50

Leeuna said…
Yay! It's great to have you back. We've missed you. And congrats on the pooh in a hat. (sounds like something Dr. Seuss would write about) Hope you're back to feeling good in no time.
13 May 2010 at 11:02

Frank Lee MeiDere said…
Welcome back! I've passed along a Sunshine Award to you, so you can pick that up any time you want (May 10th post, "Is this irony? Or what?")

And your experience puts a whole new meaning on "keep it under your hat." Also on "hat trick." Also on "throwing your hat in the ring," although I presume the hospital would have been annoyed if you'd done that.
13 May 2010 at 11:46

http://howtobecomeacatladywithoutthecats.blogspot.com said…
Hah! Glad to see you're on the far side of the claustrophobia-inducing gadget! Almost worth putting that hat on your head and dancing around... I said ALMOST. (A picture of which would make a good Pause, Ponder and Pun entry.) We've missed you!
13 May 2010 at 12:07

Lo said…
First, want to wish you good luck in your treatment and recuperation. Just got out of the hospital after surgery and rehab for a broken hip and I was sure if I didn't escape soon they were going to kill me.
Hospitals are no place for sick people.
Am on the mend and hope you are too.
13 May 2010 at 12:08

nonamedufus said…
Hey Frank! Thanks for the kind words, the shout-out and the award. That'll sure help speed the recovery along! Lookin' forward to visiting your great blog again.
13 May 2010 at 12:22

Mama-Face said…
Greatest title for a post ever. Hope you are on the mend quickly. You still make us laugh that's for sure.

My daughter is an RN working nights. She hates that she has to wake up patients. I can never understand why the only time the hospital staff vacuums is in the middle of the night.

00dozo said…
Hey! Glad your back and you sound absolutely aglow! I've spent 4.5 days in the hospital down here before I ran for my life, so I know it isn't fun. At least you got a hat instead of a bedpan that wasn't even fit for a toddler's ass.

Chris said…
I've heard the phrase, "Go shit in your hat" but I never expected it to be interpreted literally.

Jeremy from We Took The Bait said…
Instead of "hats," hospitals should start caling them "tubas." Because "Base Commander, I have pooped in your tuba!" sounds a lot funnier, for some reason.

injaynesworld said…
Welcome back and may I just state the obvious. What a shitty experience.

I was in the hospital for three weeks in 2006 and I remember how frightening it was too be so helpless and dependent on "the kindness of strangers."

I think they made me poop in a hat, too. Personally, I think we were both being punked and they were taking bets on whether we'd actually do it or not.

Tgoette said…
Welcome back, Dufus! We missed you 'round here! I will never understand nurses waking people up to take sleeping pills. Makes you wonder who's sick? Anyway, hope you feel better soon.
16 May 2010 at 01:48

nonamedufus said…
Jayne: You know, I joked about my experience but everyone involved in my case - doctors, nurses, etc. - were just great. It made my stay almost enjoyable. The food sucked, mind you. Blech!
16 May 2010 at 05:49

Ziva said…
I'm glad you're back and hopefully feeling a lot better already. :) And although you were "in and out of that claustrophobia-inducing gadget more than a drunken rabbit on a viagra overdose", the machine looks really nice, as far as inanimate machines go for intimate relationships.

MikeWJ at Too Many Mornings said…
NoName! You're back, like a prodigal son, only you never did anything shameful and wrong! Nothing I should mention here, anyway! I'm so happy!

K A B L O O E Y said…
Hey, belated welcome back! Glad to see you back in the game with humor intact. If someone woke me up to give me sleeping pills, I'd probably punch them out to give them smelling salts. Don't know if that analogy tracks, but am too tired to deal. I read this post waiting to see what metaphorical significance "I pooped in a hat" took on, but was happier it had none at all. Can't have you going all "a very special episode of nonenamedufus" on us, and you didn't. Poop in a hat = poop in a hat.
18 May 2010 at 21:51

nonamedufus said…
Mike: Oooh, good one. Unfortunately it was an English hospital but I had such a sore rear from going so often they called it chapped-poo!

Jean said…
HI!
My name is Jean and I’m a volunteer with the National Bone Marrow Transplant Link. Our organization helps patients, caregivers, and families cope with the social and emotional challenges of transplant by providing vital information and personalized support services. We subscribe to Google blog alerts, where we found your story.
Please know that others are thinking of you and pulling for you! To learn more about our programs and services, please visit www.nbmtlink.org or call 800-546-5268.
All the best!
19 May 2010 at 19:49

MikeWJ at Too Many Mornings said…
You know, I thought that was the Northern Lights. We don't get them here, but I assumed it had something to do with global warming. Now I realize it was you. Thanks for the show!
19 May 2010 at 23:53

nonamedufus said…
Birdieguy: I'm glad you checked. And I appreciate the kind words about the blog. Thanks!
31 May 2010 at 08:05

Lo said…
First, want to wish you good luck in your treatment and recuperation. Just got out of the hospital after surgery and rehab for a broken hip and I was sure if I didn't escape soon they were going to kill me.
Hospitals are no place for sick people.
Am on the mend and hope you are too.
12 May 2011 at 14:55

Ziva said…
I'm glad you're back and hopefully feeling a lot better already. :) And although you were "in and out of that claustrophobia-inducing gadget more than a drunken rabbit on a viagra overdose", the machine looks really nice, as far as inanimate machines go for intimate relationships.