Nothing affects Canadians and Americans more than a border issue. No, I’m not talking about the “tinder-box” free trade issue so unsubtly referred to as “Shop American” in the US. We’ll save commenting on that little cross-border relations gem for another time. I’m talking about a literal border crossing issue.

This issue has shades of the American Wild West. It has the two key opponents, at least: Cowboys and Indians.

At Cornwall, Ontario Canadian border guards vacated their offices and shut down the border crossing because they felt threatened by the Indians at Akwesasne. Akwesasne is an Indian reserve that is a jurisdictional nightmare. Not only does it straddle Canada on one side and the US on the other, but it also sits partially in Quebec, partially in Ontario and partially in New York State. Add the sovereign nation of Akwesasne into the mix and you’ve got more pepperonis than Italy’s pizza parliament. 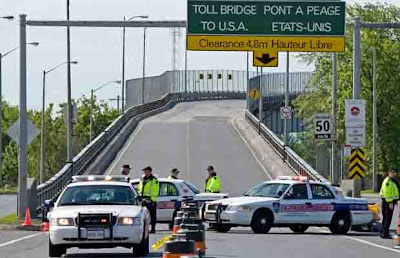 There are several odd things about this issue – beyond armed Indians. The American guards on the US side of the border are armed and have always been so yet no one has threatened to storm them. As well, this is the only place along the so-called world’s longest undefended border where anyone’s raised a stink about arming Canadian border guards.

Why is there a problem here? The Indians say having armed border guards on their land would infringe on their sovereignty. What they don’t say is it would also infringe on their highly lucrative operation of smuggling illegal cigarettes and other contraband across the border into Canada.

So that’s the Indians. The cowboys? Well, you be the judge. I didn’t know whether to laugh or cry at the comment of – and I quote – “respected security and anti-terrorism expert...John Thompson, president of the Mackenzie Institute, a Toronto-based think-tank” as reported in the Ottawa Citizen. When asked ‘why don't militants at Akwesasne threaten confrontations with the Americans?’ Thompson replied "Because the Americans will shoot back."

**Postscript: On July 13 authorities re-opened the border crossing after moving the Canadian Customs booth off Mohawk land on Cornwall Island to the Canadian mainland on a temporary basis. The Customs agents are armed. The issue remains unresolved.

DouglasDyer said…
Damn straight we'll shoot back! Well, at least Toby Keith will. And maybe some of the older national guardsmen. Not me, for heaven's sake.
9 June 2009 at 14:50