Stop! In The Name of Love

June 08, 2009
I came across an article at the Boston Globe's web site recently that made my hair stand on end and my, uh, ahem, male reproductive organ go limp. A young fella in Egypt, from a well-to-do family, fell in love with a "commoner" whom his parents forbade him to marry. To get back at his parents the guy grabbed a knife and sliced off his penis. Go-go gadget home vasectomy kit! Boy, I've heard of cutting off your nose to spite your face, but that's just a tad extreme.

But you know, for some of us (depraved and lacking in taste and political correctness) there's always a lighter side to these things. Well, certainly not for this poor fellow but there for the grace of God go the rest of us. But I got to thinking what fun a headline writer might have with this story.

Man Takes Future Into Own Hands


The Penis Less Mighty Than The Sword


Parents Against Relationship, Son Gets The Shaft


The Wedding's Off And That's Not All


There's a lesson to be learned here for parents everywhere. Next time you forbid your son to marry his sweetheart hide the cutlery. 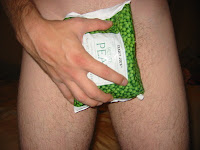 Revel said…
to get back at his parents? I'd think his girlfriend would take umbrage to his retaliation as well.
8 June 2009 at 12:17

Chris said…
I can see the parents' reaction: "Wow, son, you're sure told US! Um, you might want to get something to stop the bleeding, and by the way, the dog is running away with your willie."

Dalton J. Fox said…
I read about this the other day too. Almost made me sick to my stomach. He's a dumb bastard.

nonamedufus said…
C.B. Jones: Yeah, but he was cut off from his girlfriend, in a manner of speaking.

Chris: ",,,and the dog is running away with your willie" - lol

DJF: Yeah, me too, I just groaned when I reaD the story and then I couldn't help but laugh at his stupidity.

nipsy said…
I can see it now..baby sister runs in and yells "neener neener neener, I've got your weiner" as she waves it around in the air..

nonamedufus said…
nipsy: The saddest part about this story which I didn't mention is that doctors were unable to reattach the severed member. Ouch, indeed.
9 June 2009 at 08:51

Dalton J. Fox said…
I read about this the other day too. Almost made me sick to my stomach. He's a dumb bastard.