June 18, 2009
In this age of high gasoline prices and oil shortages one's mind often turns to a.s.e. - alternative sources of energy. In particular, we often hear the phrase "go green". But in this story a.s.e may well stand for ass source of energy. Read on to see how one community plans to "go brown".


In Manchester England they're tooting, make that touting, toilet power as the fuel of the future where the city's loos will help contribute to local gas supplies. Hey, mi gasa es tu gasa!

Two companies - United Utilities Group and National Grid - plan to turn a by-product of the wastewater treatment plant at Davyhulme in Manchester, northwest England into gas for the local gas network and fuel for a fleet of sludge tankers.


The companies have come up with one of the all-time greatest euphamisms for their product. In lieu of "shit" they're calling it "biomethane". Gee, next time I want to get out of doing the dinner dishes I'll say "Sorry, honey, I've just gotta run and pass some biomethane".


The companies are optimistic they'll be able to produce enough gas for about 500 homes by 2011. Hell, in college my buddies and I could produce that amount of gas just after several hours at the pub! Geez, my ex sister-in-law could heat her home all winter just by eating brussel sprouts once a week!


While the initiative is revolutionary, for some it may give new meaning to the phrase "waste not want not". 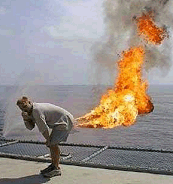 Having worked so hard to supply the raw materials, I wonder if Manchester's home-made gas suppliers will get a discount on their gas bills for their efforts.

David said…
When they get the dairy herd involved, they will be exporting biomethane world-wide.
18 June 2009 at 09:22

Surveygirl46 said…
Didn't fire come out of Cartman's ass like that on South Park?

So instead of saying i have to stop and GET gas

Thinkinfyou: Gas, gasoline - I think one's as bad as the other: both flammable.

Doug: It's pretty easy to get lit in Times Square New Year`s eve.