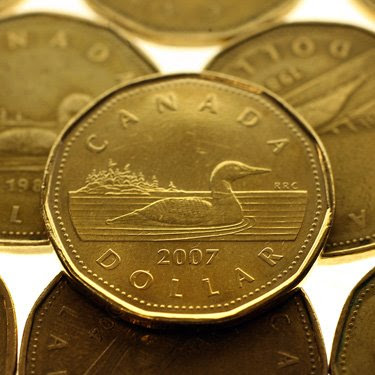 I was reading a news story recently about the value of the Canadian dollar (it was approaching par with it's American counterpart - a rare development) and I couldn't help but wonder if our currency is the laughing stock of international money markets. Not because of it's value, but because of it's name. Think about it. The Brits have their pound. The Japanese their yen and the Americans their dollar. But in Canada we have our "loonie". That's right, our dollar is named after a bloody bird - and not even an exotic one. Our currency is named after the common Canadian loon. 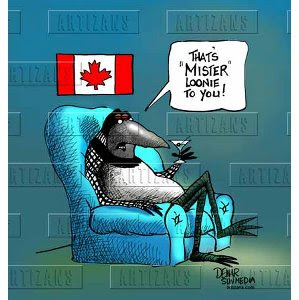 And it's not even paper; it's a coin. Which makes for heavy pockets and purses. Couple this with the fact that the Canadian $2 is only available in coin - it's called the "toonie" - Canada is a nation of men with droopy pants and women with bad backs. My wife recently cleaned out her change purse and found $35 in pennies, nickles, dimes, quarters, loonies and toonies. She's been happily walking upright ever since. 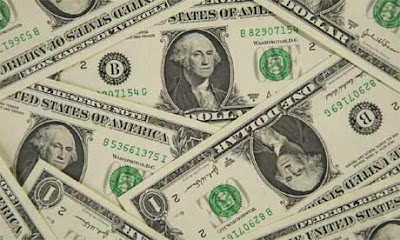 And what's with who we put on the face of our dollar? The Americans have a former president on theirs - an appropriate sign of respect for a past leader. Given what we call our currency, I don't think the same practice in Canada would be a sign of respect. But it might be accurate! 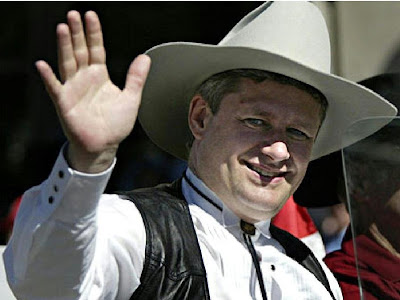 Mike said…
You might make fun of Mr. Harper, but it could be worse -

We could be calling Jack Layton prime minister and that my friend, is the day I become an American.
1 June 2009 at 08:25

nonamedufus said…
Mike: It can't get any worse. But don't worry; you won't have to move. Canadians wouldn't vote for anyone with a moustache.
1 June 2009 at 11:59

Joel Klebanoff said…
Speaking of walking upright, there are advantages to having our $1 and $2 denominations as coins. If you're a guy, you can collect a bunch of loonies or toonies, roll them and keep the roll in your front pocket. That's allowed me to cut WAY back on the money I was spending to take up the offers on all of the "male enhancement" emails I get.

By the way, the "word" I got for the "word verification" when submitting this comment was "colock". I kid you not. It looks like Blogger is starting to read minds and figured out where my mind was going with this. It came close. It just threw in a couple of extra letters.
1 June 2009 at 20:02

Chris said…
So Looney Tunes is actually a price, right?

Alexander said…
If it makes you feel any better, the British £1 and £2 are also coins. In fact I wouldn't be surprised if its in some way our fault.

nonamedufus said…
Joel: Thanks. You give new meaning to the phrase "a little change".

Anonymous said…
Chris - I had the same exact thought!!! Jinx!!! I hit comments just to write that, and zoinx! Ya beat me!

kathcom said…
I grew up on the New York side of the border. A lot of our shops had signs in the window saying, "Canadian Money Accepted at Par". The drugstore I worked at didn't, though.

I hated when people passed Canadian change at my cash register. I had to make it up out of my own money at the end of the day so the manager wouldn't know.

But that was long ago, when registers still forced you to make change. Now they do all the work. The ones at McDonald's just have pictures now, I think. Maybe I should go work there. Sounds like an easy living.

Anonymous said…
People...doesn't anyone watch the news? The loon ALREADY left the US dollar in the dust.

In January and March of 2008, they were fairly equal, and in February and May of 2008, the Canadian loon was worth more than the dollar.

nonamedufus said…
katchcom: I think the McD's cash registers are perfect for the IQ of the servers working there. After all, the only thing they know to say is "you want fries with that?"

Ms Thirty Something: Are you checking up on me? Yes the loonie soars now and again, but more often than not it trails the American buck.
3 June 2009 at 08:52

Ed said…
I think your dollar is named appropriately because if somebody throws that thing at me...I'll duck!
14 July 2009 at 12:21

Winky Twinky said…
Well, you learn something new everyday...I had no idea you Canadians had loonie toonie currency!! That's a hoot!!
14 July 2009 at 13:18

nonamedufus said…
VE: I'm off my game today. I had to read your comment 3 times before I got it. You quack me up!

Alexander said…
If it makes you feel any better, the British £1 and £2 are also coins. In fact I wouldn't be surprised if its in some way our fault.