99 Bottles for Bears on the Wall

August 20, 2012
When I get stymied over something to write about one of my first activities is a visit to the weird news sites. They usually don't fail to inspire me. Well, maybe inspire isn't exactly the right word. I mean who are we kidding? We're not doing Ernest Hemingway here are we. Faulkner, maybe. Gotcha! Ready?

I gotta say it took some time for the 3 Bears to get their revenge on Goldilocks but after all these years they finally came through. Of course Goldilocks only ate porridge and napped in their beds. For bears revenge is a dish best served bold. 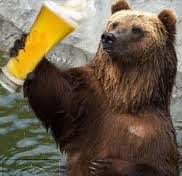 If you're going to Norway you may want to think twice before you rent a cabin. A family that did came home to quite the surprise upon their return.

Seems a family of four bruins broke into their abode and partied on dude. Did you know a group of bears was called a "sleuth"? Seems appropriate since these guys sussed out bear party central.

Yep, the four gorged themselves on all the food in the cabin including chocolate, marshmallows and honey. What is that the bear version of smores? They then found and drank over 100 beers. That's got me and Whitey beat, even on a good day! After their paws that refreshes they proceeded to trash the place.

We could learn from our four-footed friends. I mean these guys are the original party animals, don't ya think?

Of course it's too late to do anything about this big bear beer fest. I guess the owner will just have to grin and bear it.

Boom Boom Larew said…
Over 100 beers for bears? Dude! Guess I'd better pack the cooler with a few more beers for my upcoming camping trip. (If I don't show up with any beer for you on Thursday, that will be my very legitimate excuse.)
20 August 2012 at 08:20

P.J. said…
Do you think they woke up with hangovers? Or do they figure they can sleep it off this winter?

CaliforniaGirl500 said…
I live in "bear country" and they are relentless when they want something. They break into our padlocked shed consistently during Spring. it's where we keep our garbage. If we had a garage we'd stow it there but we do not. The beer guzzling is hilarious. Imagine the mess they left behind.
20 August 2012 at 16:24

nonamedufus said…
We live near the country and get deers, foxes and the odd coyote. Thank god we don't get bears. But I'm keeping my garbage in the garage just in case.
20 August 2012 at 22:35

Lauren said…
I'm also a fan of the weird news sites when I've got nothing to write about. Great material! Some of the news is hard to believe, like toilets exploding on trains and a dead man mistaken for a Halloween dummy. Yikes!