August 21, 2012
Leave it to me to get bitten by a wasp with a sexually transmittable disease. Yeah, you heard me. Kinky, eh? No I don't think so. Stingy, maybe. 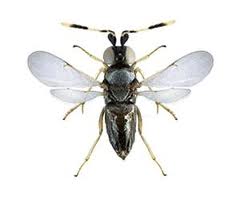 Last Thursday I went golfing with Dufus Jr.  All was going well - as well as could be expected given each of our golf games - until we hit the back 9. We pulled up for our second stroke on #12 - a par three.

I stopped the cart to the left of the pond, Jr. hopped out to take his shot. His tee shot had landed there; mine just shy of the green, straight on the pin but, alas, not quite out of the pond. All of a sudden I felt like someone was sticking pins and needles in me. Simultaneously, I noticed a disturbance in the air around me. Tons of tiny black things were buzzing around me erratically. All in one move I yelled at my son, swatted at the air and stepped on the gas. I must have looked quite comical because Jr. tells everyone, arms waving around my head and torso (me in the cart not him telling the story), I didn't stop until I hit the parking lot. In reality I only went about 30 feet, almost up on the green. I almost travelled further than y ball.  Damn, I'd been swarmed by wasps. I must have stopped the golf cart right over their nest. Or maybe it was that Axe deodorant I was wearing. Sorry little guys. I didn't mean any harm. In the words of that immortal philosopher Boy George "Do you really want to hurt me?". Evidently yes.

Now I can deal with a sand hazard. Even a water hazard. But a wasp hazard. The club might have warned me of this additional little trap, eh?

Fast forward to yesterday. I managed to get in to see my doctor because one sting stayed with me and was giving me considerable discomfort. The sting was on my right shoulder/chest and had grown to a motley irritation of about seven inches long. "There's something going on here" I thought to myself after Mrs Dufus told me about nine times "There's something going on there. You should call the doctor". "So" I thought "Maybe I had better call the doctor." 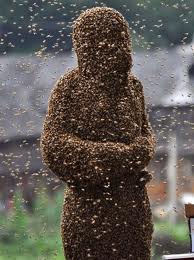 But my doctor also had a little surprise for me. He "hmm-ed" and "ah-ha-ed" and quietly said "Hmm, ah-ha, looks like herpes."

"You know, shingles", he said and prescribed me medication and told me to get some calamine lotion.

Damn that trollopy wasp. Biting anything with pants.

The upside of course is I quit playing after 16 holes.

Amazing how much my score improved.

P.S. I'm seeing my hematologist Wednesday but I'm almost certain he'll confirm the diagnosis. Looks like I have shingles, which is the reappearance of the chicken pox virus years after someone has had the disease. It probably has nothing to do with the wasp bite. You see with my multiple myeloma my immune system isn't strong. Since my cancer diagnosis I've been warned shingles could occur at any time. I think the episode with Mr Wasp brought them out. The weird thing is I had chicken pox over 50 years ago. And I was diagnosed with cancer over 10 years back. Go figure. Sometimes life - and wasps - suck.

the sting
Labels: the sting

mike said…
I had the shingles years ago but caught it just in time, so it was treatable and (mostly) painless. Great that they have meds for it now. In the olden days I think you had to suffer through it, which could be crazy severe.
21 August 2012 at 11:17

nonamedufus said…
I think I may have caught this in time. I hope so. Looks pretty gross right now. Currently on antibiotics.
21 August 2012 at 13:16

Tami Von Zalez said…
Yeah, welcome to the "stung" crowd - I landed in ER last month with a reaction to a sting that made my feet swell so I couldn't walk. grrrr

babs (beetle) said…
As if being stung by wasps isn't bad enough! I hope the treatment deals with your shingles quickly. Not nice.
21 August 2012 at 19:04

Cheryl said…
It's not 'just shingles' buddy. Shingles can be debilitating. Get treated with something SOON. Don't fool around with this thing. I mean this from the bottom of my heart. My dad had them before there was any treatment. It was horrible to watch him in so much pain & knowing he could end up with permanent nerve damage. It was frightening as hell. You can't afford to not be aggressive with them.

Shawn @ StubbornFool.com said…
Too late for us but they just developed a childhood vaccination against Chicken Pox.
22 August 2012 at 06:42

Nora Blithe said…
Life and wasps do suck. The upside is you made it as hysterical as you possibly could. Hope you're feeling better.
22 August 2012 at 12:51

P.J. said…
Never telling where those wasps hang out and what they do, eh? I hope you don't have to try and get the sex life of that wasp. It might already be dead.