Is That Why They Call It The Rumpus Room?

Three workers at a Deleware Daycare in Dover were recently arrested for holding their own little fight club. And by little I mean toddlers. Yeah, that's right they were coaching some baby boxers.

Can you imagine a bunch of little guys barely old enough to walk and still in diapers being egged on to duke it out?

Rumour has it one of them was named Dyler Turden. Ew. Messy. 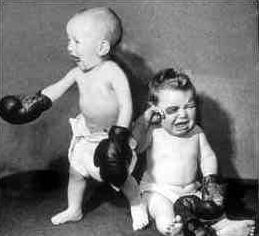 "Okay, I knocked him down. Now will you change my damn diaper?"

Three employees of Hands of Our Future Daycare (I'm not kidding you, that's what it's called) were arrested after a cellphone video got out in which a three year-old can be heard crying and yelling "He's pinching me." The caregiver, while pushing him back up against his pint-sized pugilist opponent can be heard saying "No pinching, only punching."

The daycare has had its license suspended pending a hearing.

Serves them right. Everybody knows rule one of fight club is you don't talk about fight club. 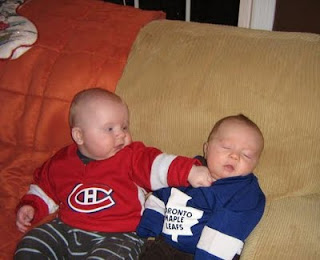 These guys have graduated to the hockey fight club.

Indigo Roth said…
Hey Dufus! Okay, I'll be brave. It isn't funny. But yes, it could be. I keep thinking of Baby Herman in Roger Rabbit, smokin' a stogie between bouts and goosing his nanny. But this is nothing like that. Roth
27 August 2012 at 07:32

Boom Boom Larew said…
Thanks, Dufus... you just gave me a great idea for livening up my work days. (Are those two hockey buffs your Thing 1 and Thing 2 in earlier days?) Seriously, though, it's good that place had their license pulled... just when you think you've seen it all, somebody comes up with something even more outrageous.
27 August 2012 at 08:19

Lauren said…
When my son was three, he'd get a time out for yanking a toy out of another kid's hands. If only I had known about toddler fight clubs back then. The "Y" daycare was too politically correct.

babs (beetle) said…
I knew somebody who's 5 year old broke another boys nose and his father patted him on the back and said "That's my boy!" I imagine that this would be something he would have admired.
27 August 2012 at 15:13

nonamedufus said…
no this is nothing like that. Although when these guys get sent to a corner I guess it's for a time out right?
27 August 2012 at 20:16

nonamedufus said…
Grat minds think alike, Lauren. I was thinking of training my grandkids.
27 August 2012 at 20:18

nonamedufus said…
This would have been perfect. I mean otherwise his nose might be out of joint. (hahaha)
27 August 2012 at 20:20

nonamedufus said…
Sorry, Cheryl. I know this is terrible. But can you believe these people? And they call them caregivers.
27 August 2012 at 20:22

Cheryl said…
Just because they call themselves caregivers doesn't mean they are. Ignorant idjits. Then again, so are a whole bunch of people who gave birth and call themselves parents.
27 August 2012 at 22:30