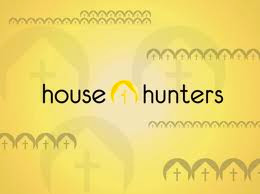 Television can be such a wasteland - filled only with reality shows that really make me wince. When I feel beaten down by all the whacky characters of weality TV, and all my favourite dramas are in repeats, I retreat to that safe refuge known as HGTV.
One of my favourite shows used to be House Hunters. I enjoyed how couples were shown three different residences and at the end of the show chose the house they felt was best suited to them. The wife and I have been watching this for years. Maybe too long. Lately we've noticed the participants make quite inane comments about the homes they visit. Inane comments to the point that my wife and I shout back at the screen in response to their stupid statements. We think we could start a show of our own. Yeah. You know how movie DVD's sometimes inlclude versions of the film run over it's director's commentary? Well we propose an edition of House Hunters - Viewer's Commentary. And it would go something like this:
Oh, I don't like those drapes.
Then replace them, dummy. Buying a house doesn't come down to something that's so simple to replace.
You know I think that bathroom could use some work.
Hey, you ever hear of the DIY Network?
Oh, I'm not sure I'd like living so near the railway.
Hey, at least it's not the airport, honey.
I like the house but the closets are so small.
Hey, who are you, Oprah?
Oh, I don't know where I'll be able to put all my shoes.
On eBay, maybe? How many shoes do you have? You're looking for a house with 4 bedrooms and you have no children. Put them in one of your bedrooms, Bitch!
I gotta have me a man cave. But this room is no good, it makes me feel like I'm in a prison.
You look like you just got out of prison, mofo.
Ew, I'm not sure I like that colour. It's so....purple.
There's this new labour saving device that's quite popular these days. It called a PAINT BRUSH you spoiled bimbo!
Oh, I don't know. The rooms seem so small.
Hey, you're the one who wanted to live in the middle of downtown. You want more room? Like John Prine used to say:
Blow up your TV, throw away your paper
Go to the country, build you a home
Plant a little garden, eat a lot of peaches
Try and find Jesus on your own. 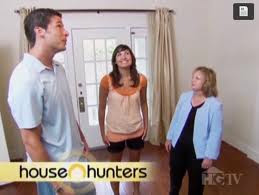 I don't know but the ceilings seem a little low...for me.
So move to a castle. Who do you think you are, the Jolly Green Giant?
What do you think? Possibilities? My wife and I think it's the funniest thing on TV!

This reminds me of the show from the 90s called Blind Date where they put little commentary in thought bubbles for the participants. It was a snarky little show and I loved it dearly. Too bad it got canceled.
3 February 2011 at 08:49

nonamedufus said…
Jen: I remember that show too. It was funny. Do I detect a shoe sensitivity on your part?
3 February 2011 at 08:53

ReformingGeek said…
I will admit that I've actually watched that show a few times.

Ahem. Have you seen the price of drapes lately?

Donnie said…
I watch HH regularly too and I know exactly what you are talking about. "The color is not good". Duh, how about a can of paint. "I don't like this rug." Okay so ask for an extra ten grand off the price. Sheesh! Too much sometimes.
3 February 2011 at 10:31

nonamedufus said…
Donnie: You've got it. That's it exactly. My wife and I thought we were the only ones. It's a great show for keeping the communication going between us!
3 February 2011 at 10:38

Unfinished Rambler said…
I think I would like it, especially if I could hear your voices. Then I could know who said "mofo" or "bitch." I can't imagine Mrs. Noname using such language. :)
3 February 2011 at 11:27

nonamedufus said…
UR: Are you kidding? Sometimes watching TV with her is like living with a longshoreman.
3 February 2011 at 12:00

Kelly said…
Oh, where do I start?

The people who state their list of requirements: 4 bedrooms, 5 baths, 3800 sq. ft with a state of the art kitchen in the best school district but their budget is $125,000. American money.

The people who nitpick over stupid stuff and give a thumbs down to a great house because a) they don't like the furniture (not part of the sale!) 2)they hate the color of the paint (obviously it's permanent paint that cannot be changed) and iii) there's no jacuzzi tub in the master bath or a Man Cave.

And I LOVE it when they pick the house that is clearly the worst of the 3: terrible location, farthest from work or is $$$$ over their price range.
3 February 2011 at 12:44

You are DISSING on HH?

Only one of the greatest shows. Ever.

I laugh too at the silly remarks.

00dozo said…
What really pisses me off more is that A&E went all reality t.v. (well, mostly). The Discovery Channel isn't much better and TLC should be renamed, "The Lagging-in-Learning Channel".

I've not seen HH but, in my experience in real estate, the new owners tend to gut the place regardless of how it presents itself at sale. Yeah, I get the commentary thing - it's just too bad they can't hear you.
;-)
3 February 2011 at 18:22

nonamedufus said…
00dozo: I agree with you about A&E. The Bill Curtis network used to have some great shows. I find I spend a lot of time on HBO these days. They've got some quality programming that I find I don't talk back to.
3 February 2011 at 18:32

Unknown said…
We must figure out a way to make this happen. It's absolutely genius.

nonamedufus said…
Thomas: I think HH goes out looking for the stupidest homebuyers out there. Hey, why else would they need help?
3 February 2011 at 21:18

Linda Medrano said…
I used to watch that show every day. I like it but the people are stupid. But then again, that might be why I like it.
3 February 2011 at 22:12

nonamedufus said…
Linda: It kinda snuck up on me. At first I used to think it was the odd couple that made stupid comments. But over time I realized it was practically every couple in every show.
4 February 2011 at 08:28

Leeuna said…
A running commentary by the viewer is the best thing about watching these shows. Wayne and I love to argue with those home makeover shows. Some of the things they do is totally hideous and they think it improved the look. I often wonder if these people are coached before the show to say stupid stuff.

http://howtobecomeacatladywithoutthecats.blogspot.com said…
I think it's totally outrageous that a college student can't find a decent house anymore in the $500K range (the money that their daddy gave them)... I mean, what's with the horrible paint and tacky non-stainless appliances? No closet the size of Manhattan? No pool? No theater room? Seriously?? How can they ever show their faces at junior college with a dump like that?

(I usually stick to House Hunters International... although they have some of the same issues.)
5 February 2011 at 23:03

nonamedufus said…
Boom Boom: HHI isn't half so bad. I find it very interesting. Especially when the folks want to renovate and are on the hunt for the worst looking shell of house possible. Amazing.
6 February 2011 at 09:51

This reminds me of the show from the 90s called Blind Date where they put little commentary in thought bubbles for the participants. It was a snarky little show and I loved it dearly. Too bad it got canceled.
12 May 2011 at 15:14

Thomas said…
We must figure out a way to make this happen. It's absolutely genius.