What's In A Name?

February 24, 2011
We live in an amazing world. The latest civilian uprising against an oppressive government is currently occurring in Libya. And the world's media can't even agree on how to spell the leader's name. Some say the revolution may take longer than agreeing on the spelling of his name. For instance, I've seen:
Gaddafi
Khadafy
Gadhafi
Qadhafi
Qaddafi
Apparently the Library of Congress lists 72 alternate spellings. In addition, the New York Times, the Associated Press and the Xinhua news agencies have used another 40 different spellings since 1998.
Some have called him Qadaffy Duck.
Others prefer Daffy Douche.
I may have found a new one: 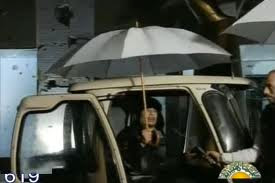 Cruella Collett said…
I heard another good one the other day. "Why is the people of Libya so angry with Carlos Santana?"

nonamedufus said…
laughingmom: Yeah, you're right. And no spoonful of sugar's gonna help this medicine go down.
24 February 2011 at 08:39

And this is funny Mr. Noname! I think I like Qadafy Duck, but dang Qadafy Douche is priceless too!

So many good choices....

http://howtobecomeacatladywithoutthecats.blogspot.com said…
Crazy by any name!
24 February 2011 at 11:38

MikeWJ at Too Many Mornings said…
In addition to name spelling, I keep having this debate about who's loonier. Daffy Duck or Kim Jong Il of Korea. I mean, really, how did these guys get to be dictators? They're goofy as hell.
25 February 2011 at 02:39

nonamedufus said…
Mike: Imagine all these kooks fleeing their countries and gathering all in one place somewhere. Yikes, imaging the shit they could get up to together! I wonder if there's an old folks home for former despotic rulers someplace?
25 February 2011 at 07:51

00dozo said…
The 'popemobile' like vehicle might save his life, but I doubt the umbrella will shield him from a hail of bullets. Where are Palin's assassins when you need one, eh? (He actually looks like Steve Tyler in that photo.)
;-)
25 February 2011 at 12:40

nonamedufus said…
Ziva: Wow, you've really been paying attention. I'm impressed.Do you subscribe to Dictator Dickwads or something?
25 February 2011 at 17:32

00dozo said…
The 'popemobile' like vehicle might save his life, but I doubt the umbrella will shield him from a hail of bullets. Where are Palin's assassins when you need one, eh? (He actually looks like Steve Tyler in that photo.)
;-)
12 May 2011 at 15:11