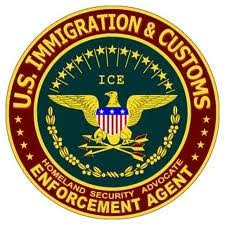 To Serve And Delay
Why me? Why do these things always happen to me. Canada/U.S. relations hit a new low last night when I touched down in Miami en route to Orlando from Panama. I know our dollar's worth more than the American currency in the current economic smack down but, hey, do you have to take it out on me?
So let me back up a bit. We left the condo in Bijoa Tuesday morning at 11:15, well in time for the two and-a-half hour drive to the airport. We made good time, traffic was good, we didn't get lost. We were humming our way through downtown Panama when from behind us we hear sirens. So we move over to the right lane. All of a sudden three police motorcycles whip by us in the left then one, whish, two, whish, not three, four, five but six dark windowed SUV's whip by us...and I mean they were moving. I'm thinking they're either shooting an instalment of Criminal Minds in Panama or that's the President's motorcade. Well, bringing up the rear were two guys in army fatigues on a motorcycle with the guy on the back extending his arm, pointing at us to STAY BACK. Hey, who's gonna argue with some guy in sunglasses armed with a sub-machine gun.
So that was exciting. Little did I know it set the tone for what was going to happen later in the day.
The American Airlines flight departed on time from Panama on it's three hour flight to Miami. I deplaned all set for the steeplechase marathon of Immigration, collect bags, Customs, re-check bags, security (oh, boy a pat-down) and determine the gate of my next flight on to Orlando. Shouldn't be a problem, Hell, I've got three hours. How long can it take?
So I get in the "Visitors" line up at Immigration. Things are moving slowly but surely. I reach the agent, who's friendly enough. He asks me how I am "Fine, thanks, how are you?" He asks me where I'm coming from "Panama" Nice there? "Great but hot" Bringing any money into the country? "Not much" ...pause... sir, this is purely routine but would you step back against that wall, an officer will be along in a moment? I feel myself going down, down, spiralling uncontrollably into a dream - a nightmare. What did he just say? Wait a minute, what's this about? Shit!
It's not like I was singing ICE, ICE Baby as I approached Mr Customs Man. But maybe they're gonna bust me for that five pound bag of Panamanian coffee (Yeah, I said coffee) I've got safely stashed in my golf bag. Five seconds later a female agent escorts me to THE ROOM. I'm shocked when I enter. She tells me to have a seat and wait for my name to be called. Oh, sit in here, with these other 100 people?! I felt like I was in a holding tank. Remember Alice's Restaurant. Remember the Group W bench? Let me help you... 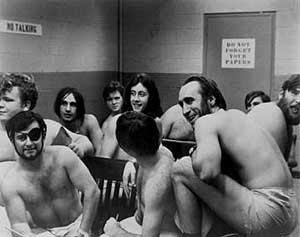 US eh
Labels: US eh

And I dunno Nomie, you do look pretty suspicious to me. Not that I would ever judge you, but...

"Matinoba"? Sounds like the name of that small town in Mexico they mentioned in, "The Shawshank Redemption".

http://howtobecomeacatladywithoutthecats.blogspot.com said…
I've been on the Group W bench before. Good times! Good times!
Nobody accosted me at the Tampa airport when I arrived here yesterday. Must be that limp's working for me. Enjoy the sun! I know I am!
19 January 2011 at 16:06

Venom said…
You weren't strip searched or (yikes) cavity searched, AND they didn't confiscate the coffee? It's all good I would think.
19 January 2011 at 19:25

Don said…
Sorry you had to go through that. Your name must have been similar to someone that was profiled...

That said, hanging on the rope like that, you do look suspicious... ;)

Leeuna said…
On behalf of the USA, please allow me to apologize. I feel so embarrassed.
Of course as a taxpayer, I have no say in government matters. Enjoy your stay. :)
20 January 2011 at 05:50

nonamedufus said…
Don: Yeah, if the guy with the sub-machine gun had have been trigger happy, this would have been a whole different post...the last post!
20 January 2011 at 08:24

nonamedufus said…
Leeuna: Apology accepted. Thank you for providing it on behalf of the American people. You're very kind.
20 January 2011 at 08:26

Linda Medrano said…
At least you made your flight! I got jacked up in London once, but I'd already swallowed the evidence.
20 January 2011 at 16:10

Ziva said…
Last time I went to the US there were some "problems with my fingerprints" and I was led away from my family into another room where a very big guy stared at a computer while I sat and laughed nervously. He didn't say a word and then just let me go. They never did explain what the problem was.
20 January 2011 at 16:27

nonamedufus said…
Ziva: That's the annoying part. You sit there for so long without them telling you what the problem is. Sheesh. What's up with that.
21 January 2011 at 01:10

nonamedufus said…
Nicky: Ever been to Manitoba? I don't think I'd ever want to admit I've been there. A 5lb bag of coffee beans, dirty laundry, books and 3 pairs of footwear were in my golf travel bag. American Airlines charged me $65 to put it on the plane.
22 January 2011 at 00:30

Don said…
Sorry you had to go through that. Your name must have been similar to someone that was profiled...

That said, hanging on the rope like that, you do look suspicious... ;)