Adventures in Panamaland (4) You Know You're Getting Old When…

Life's been hard on our Panama holiday. My brother-in-law didn't get his internet installed until a little over two weeks after I got here. So I've been having withdrawals. I posted my first piece from Panama December 30th on the fly from an internet cafe - $1US for an hour! And I decided to leave my Blackberry at home. Anyway, let's continue with our adventures…

When we first arrived at my brother-in-law's place at the Bijoa golf/beach resort on December 21st there was nary a soul other than us here. We'd spend a lazy day at the beach, play a round of golf or sit in the late afternoon glow of "happy hour" with hardly a sound to be heard. That all began to change around Christmas when we noticed with annoying frequency the loud buzzing of what might have been over-sized insects but were really Kawasaki 4 seater ATVs. They seem to be the mode of transport of choice of the Panamanian well-to-do who live in the complex. My brother-in-law says the units here - condo apartments, town homes and houses - are basically used by well off Panamanians as their weekend and holiday beach residence. The rest of the time things are pretty quiet. Nobody here but us and the security guard ninjas. Is it just me, or am I getting old? I swear the drivers and their passengers of these things ripping around the pathways here have an average age of 7! I'm not kidding. When I was a kid and my parents told me to go play i the traffic for an hour I knew they were kidding (I think). But not only do these kids play in the traffic they all have their own little vehicles! And speed. These things whip around here so fast I swear they'll soon need a traffic cop…or an ambulance. And it's the same thing at the beach. Kids on ATVs are everywhere roaring up and down the coast. When did beaches stop being for people. Well, I suppose things could be worse. Two years ago when we stayed at the Royal Decameron resort not too far from here, there were horses being ridden up and down the beach. The word to the wise on that beach was look before you step.

Over New Year's this place was jumping. I think the entire upper crust of Panama City migrated here to celebrate the holiday. And I think the average Panamanian family must be quite large. We'd sit on the balcony or at the beach and marvel at the pre-pubescent kids, crawling up and down in packs, all on their cell phones. Cell phones? At the beach? Who the hell are they texting? Their friends are all here! 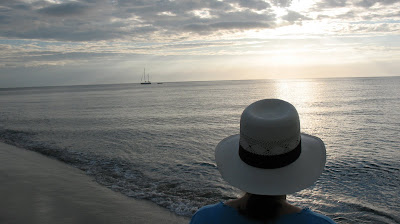 Mrs. D enjoys our first sunrise over the Panama Gulf

But it's not just kids. Everywhere you go in this country people employ the salute known internationally. Right arm raised, bent at the elbow, cell phone implanted firmly in one's right ear. Let me give you an example of how crazy it is. We were at a party the other night, meeting some folks from Panama, Columbia, Sweden, us from Canada - a real United Nations affair. People sat at dinner tables in the back yard and animated Spanish conversations drifted to me from the different groups of people. The loudest voice of all was a woman at the other end of my table. I just figured she must be telling her seat mates an interesting story. I turned to see who was talking. Turns out her animated conversation was with someone on the other end of her cell phone. Most people go to parties to socialize with the people there. Not talk to someone who isn't. Don't they?

I am getting old.

My brother-in-law got his internet. I can post pics now. Yay!!!

00dozo said…
Aw'ight! Photos! Before you leave, you've gotta do the group photo, on the beach at sunset, with all of youse wearing Panama hats!

You know why there are tourists on the beach full of ATV's? Speed bumps.

Linda Medrano said…
It looks like an amazingly beautiful place. The cell phone thing I really don't get. I have one, (of course), but rarely use it for calls. I hate seeing people use them in restaurants or at parties. It's like they are trying to impress people with how important they are. I think it's rude. Still, I wish I was able to travel to Panama, maybe tomorrow.
7 January 2011 at 21:31

nonamedufus said…
00dozo: No group photos possible. My wife and her aunt left Tuesday, with her Panama hat. I didn't get one, so I guess after a day in the sun that makes me Panama red.
7 January 2011 at 22:00

nonamedufus said…
Linda: Hey, plenty of room at the condo. It's an amazing country, despite the cell phones.
7 January 2011 at 22:02

nonamedufus said…
Whitey: Easy, easy. You'll hear about it next week. And then you'll see what you and Killer are up against. (I seriously don't think you guys have anything to fear.)
8 January 2011 at 06:40

Rosemary said…
I AM old, so the whole cell phone thing really bothers me. Hope you had a good vacation in spite of the irritations!

nonamedufus said…
DB: You know what? Me too. But I kinda wish I had this kind of technology when I was their age! Although, then my parents would have been able to keep track of me.
8 January 2011 at 13:02

Rosemary said…
We were too busy outside playing to be involved with something like texting. And then when the teen years hit we were dating. You SURE wouldn't have paid attention to anyone else on a DATE!! Not like that now. It's just strange to me.
8 January 2011 at 17:21

nonamedufus said…
DB: I think soon kids will have a chip permanently implanted in their ear. It's coming. Wait and see.
8 January 2011 at 17:32

Linda said…
Sounds like an amazing vacation in spite of the kids speeding around on their ATVs. Happy New Year!.
8 January 2011 at 22:19

http://howtobecomeacatladywithoutthecats.blogspot.com said…
I was concerned about the alarming rise in schizophrenia before I realized it was just people talking on blue tooth devices. (Then again, maybe the woman at the party was just trying to drown out the noise of ATVs in the background by shouting into her phone.)
9 January 2011 at 09:27

nonamedufus said…
Boom Boom: You know I looked pretty closely at that woman at the party and I'm pretty sure her teeth were white...although her lips were moving so quickly it was kinda difficult to tell.
9 January 2011 at 09:51

And regarding cell phones, pretty soon we will no longer be using the wave of a hand to say hello. We will just left our elbow and put it back down.

In you're in Europe, just beware of the hairy armpits.

nonamedufus said…
Quirks: If I ever get to Europe I'll keep that in mind. Haven't they heard of long sleeves there?
9 January 2011 at 20:50

And regarding cell phones, pretty soon we will no longer be using the wave of a hand to say hello. We will just left our elbow and put it back down.

In you're in Europe, just beware of the hairy armpits.