January 31, 2011
From Africa comes a story that is sure to cause reverberations...or, perhaps, prevent them. The country of Malawi is tired of its citizens making a stink. Not in opposition to the government...just making a stink. The government of Malawi plans to punish persistent offenders who foul the air. You got it. No more farting in public. 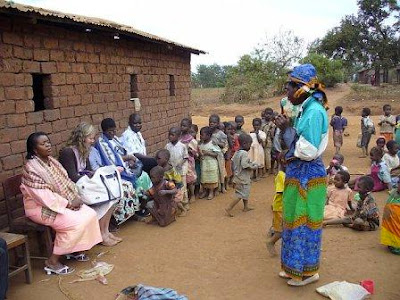 No farts for you!
Can you imagine the reaction to such a law? I'll bet residents think it's the shits. After all, the government intends to muzzle freedom of expression. I wonder what happens to a muzzled fart? The mind boggles. And the eyes cross.
No more tooting in the streets. And I'm not talking car horns. Of course, residents are skeptical as to how the new law will be enforced. Will there be a special fart force of Storm Poopers? And in public, how will they be able to tell just who the culprit is? To the cops' questions of "Who cut the cheese?" they'll never nail the nasal offender when everyone points at one another and says "He who smelt it dealt it."
South African activist Desmond Toot Toot expressed dismay with Malawi's move, saying a fart tied was far worse than apartheid.
Others say there hasn't been this much talk of flatulence since Madonna made her case to adopt her last child.
But Malawi's lawmakers appear unperturbed by the criticism and are not willing to bend...over.
Opposition leader Bingu Fartsalot, however, says the people's will, will out in the end. For now, however, the answer is blowing in the wind.

Donnie said…
Hey! Cut those folks some slack. I hear water buffalo fat is really greasy and doesn't sit too well on the stomach.
31 January 2011 at 18:05

Anonymous said…
And will they have one of those signs? Circle with a line through a green cloud?

Because I was planning to.

nonamedufus said…
Quirks: That was close. Glad you read this in time. Last thing we need is for Quirks to be locked up in a deep, dank, stinky cell in Malawi. Why stinky? Well, um, you know...
1 February 2011 at 07:49

MikeWJ at Too Many Mornings said…
I'd like to speak out on behalf of my people, the British, and say that I think it sounds very civilized.
1 February 2011 at 16:10

00dozo said…
I don't think they could pass this gaseous garnishment in France - Frenchmen always seem to be farting in your general direction.
;-)
1 February 2011 at 18:07

nonamedufus said…
00dozo: Ah, that may explain why they're always saying "Il faut que je pète". Or where Monty Python came up with that line originally.
1 February 2011 at 18:19

Paula Wooters said…
They'd better keep their dogs close to pass the gas blame onto them.
2 February 2011 at 11:53

Quirkyloon said…
And will they have one of those signs? Circle with a line through a green cloud?

Because I was planning to.