Adventures in Panamaland (7) Size Does Matter 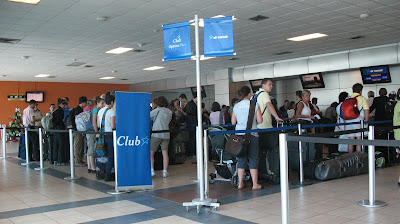 The day we drove my wife and Tante Poutine to the Tocumen Airport the other side of Panama City we were up with the birds. Their flight was around 1:30pm but it's a 2 hour drive and their charter company Air Transat tells you to be at the airport 3 hours in advance of your flight. We left Bejao for the airport about 6:15am. We off-loaded Poutine and Mrs D with their luggage along with my mother-in-law while my brother-in-law, his son and I made arrangements to trade our van in on a sedan. The deal done we met the departees on the departure deck. So, first step accomplished: arrive at airport on time. We knew it was too good to be true. Turns out the airline's computer's were down and all passengers and their luggage would have to be processed by hand. Luckily our two travellers were in Club class and were among the first passengers to be processed. There were tears all around, not on my part of course, and hugs and kisses as we said our goodbyes and waved to my wife and her aunt. Next stop: MetroMall.

Once at the mall, which isn't too far from the airport we decided on breakfast. It was about 10:30 and I don't think the food court does breakfast because hardly any of the establishments were open. We settled on hamburgers at the McD outlet, which evidently didn't do breakfast either. Then we hit the stores. I was looking for some golf shirts, so that I might at least look like I know what I'm doing when I play, but found out the hard way that often XL must mean medium. I did get a nice shirt at a sportswear store that fits well but the 3 I bought at a bargain basement place are a tad tight. And nothing comes in anything over XL. Don't they know size matters? Gee, they have small people in Panama.

Odd thing about Panama. People move a little slowly. I'm not talking about people on the roads. Once behind the wheel some kind of transformation takes place and they zip and zoom like dive-bombing hornets. But retail clerks and cashiers, that's another story. In a department store called Stevens we just about tore our hair out we had to wait so long to pay for our stuff. There were seven people all appearing very busy behind the cashier's counter, but only one of them was ringing in purchases. I don't think the other six were "in training". But they sure weren't big on customer service. 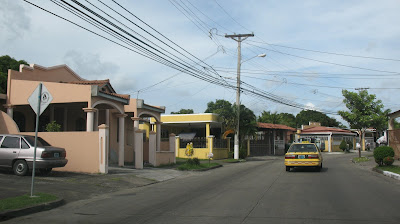 Anyway, it was well past noon, the trunk was full with our shopping bags and it was time to head for home. Driving through Panama and finding the main highway can be a challenge. But we managed to find our way after trips up and down some off the beaten path side streets. I don't think it was the regular route but I guess my brother-in-law knew where he was going, or at least had a good sense of direction. It was the scenic route you might say.

So we've found the Pan Americana highway and we're happily on our way home. And I can almost taste a nice cold Balboa out on the condo balcony when - zip - my brother-in-law's taking a right exit off the highway into the town of La Chorrera, about an hour shy of our destination. Why? Cause he thinks there might be a hardware store where he can find some drapes for his balcony. Well we found a huge home store so my brother-in-law, his son, the mother-in-law and I all pile out and trot into the store. No drapes, but they do have some fans he's looking for. He makes his choice and the sales guy piles two huge boxes into a shopping cart and wheels them to the cash at the front of the store.

But wait! Look at that BBQ! Man, it's a Weber. Oh I like that. I think I should get it. Of course by now we have no van. We already have two huge boxes that I doubt will fit in the trunk and my brother-in-law wants to take the BBQ too! I tell him we don't have room. The salesman tells him the last one is the display model. I tell him that it'll never fit. I tell him the solution would be to ask them to dismantle it and we'd come back the next day. But he wants it today. I tell him the behemoth BBQ is too big. So we measure the BBQ. We go out to the parking lot to measure the trunk. Guess what? IT'S.TOO.BIG! Guess what he does. "Hey, maybe if they took it apart we could come back tomorrow." Hello! Where were you half an hour ago when I said this??? Size matters!!! 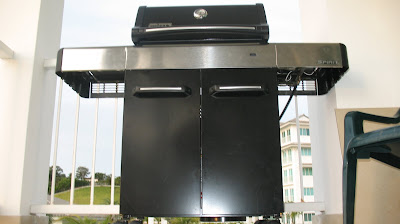 We stopped off for dinner on our way out of La Chorrera. Chinese food, of all things. No Balboa…Sprite. It was around 7:30 when we finally got home. I had TWO big Balboas. They tasted really good. Size matters. 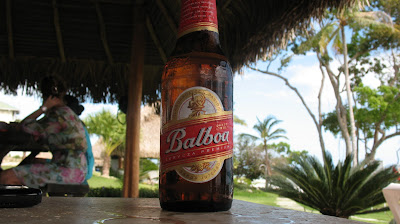 By the way, I'm off to Orlando today for a week of golf with my brothers. Nobody told me I'd be going from 40 degrees celsius to 17. Ah, well, at least it's not as bad as home where there's snow and it's something like minus 24! So I may be back at you later this week. If not, I'll see you in a week!

Anonymous said…
I have enjoyed the Panama Vacay through the eyes of Noname! It's been fun!

And I say you should count your blessings. While driving the "scenic routes" with your bro-in-law at least there wasn't any gas "emissions" going on.

I mean you didn't mention it and with all that Panamanian cuisine (Chinese?) it might set aghast (pun!) your bowels.

Linda Medrano said…
A neighbor of mine grew up in Panama. Her dad worked on the Canal. She has very fond memories of the place.
18 January 2011 at 12:21

nonamedufus said…
Quirks: Aw, thanks, glad you followed along. Oddly enough none of us had a gas problem. Hmm...what's up with that. Unless I did it in my sleep. No wonder the room smelled kinda funny in the mornings.
18 January 2011 at 14:36

nonamedufus said…
Linda: It really is a gorgeous country and the parts I saw are full of contrast. The resort I was at was lush, great beach, golf and so on. But Panama City is something else. Full of huge skyscrapers. Even Trump has built a tower. While we were here we observed Martyrs' Day, an observance of when students rioted protesting the American flag flying in the canal zone by raising the Panamanian flag. Things got out of hand and a dozen or so students were killed. So it wasn't just relaxing. We got a bit of a history lesson too!
18 January 2011 at 14:39

Donnie said…
Stevens sounds a lot like local retail stores here. People just simply move at a slower pace. I'm one of them, but don't pull your hair out on my behalf.
Geez. How much longer are y'all going to be down there?
18 January 2011 at 15:03

nonamedufus said…
Don: Yesterday was my last day. It's been a month. Today I start a week In Orlando, golfing with my brothers. Should be fun.
19 January 2011 at 03:17

Quirkyloon said…
I have enjoyed the Panama Vacay through the eyes of Noname! It's been fun!

And I say you should count your blessings. While driving the "scenic routes" with your bro-in-law at least there wasn't any gas "emissions" going on.

I mean you didn't mention it and with all that Panamanian cuisine (Chinese?) it might set aghast (pun!) your bowels.