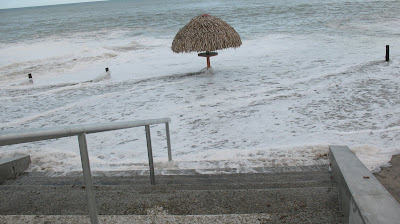 The other morning I awoke with a start to the sound of the surf pounding upon the sand. It was 6:15am. I staggered sleepily out to the balcony and sure enough the waves were something to behold. I quickly got dressed, grabbed the camera and made my way between the horizon pools to the beach. From the balcony, the pools actually hide the beach and up until now the waves. But what moved me to preserve this Kodak moment was the fact that I could see the waves from the balcony this morning.

When I arrived at the beach I beheld a sight of nature unleashed. The waves were crashing and the surf was rushing up the beach further than ever before. The bases of the thatch-roofed umbrellas were covered in water and one had even been knocked over by the constantly rushing water. I snapped my pics as the sun was rising and stood back and enjoyed the moment - a panoramic view of nature doing it's work. It was quite a start to the day. I was charged. 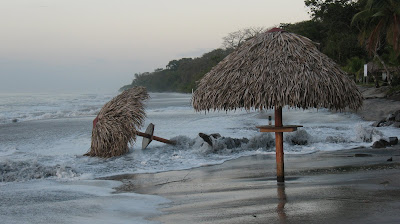 Speaking of charged, when I returned to the condo my brother-in-law was in the midst of searching high and low for his cell phone charger. Just the other day over another incident I'd told him I thought this kind of thing ran in his family because his sister, my wife, is always putting things in places she says she'll remember but, alas, always forgets. He's just the same it appears. I call it CRAFT (Can't Remember A Fucking Thing). Anyway, he'd looked everywhere; in every drawer and cupboard, under every bed and piece of furniture. He was frantic. Without it his phone would crap out and we'd never get that call from the internet company to book an appointment to hook us up to the internet, the cable and a home phone. What? We'd miss the call about the internet? Even I joined in the search.

We were all searching now, even my mother-in-law. You remember her. She's the one with diminishing eyesight who asked her son to open her half-lime at dinner one night thinking it was a container of tarter sauce. Since then there've been a few other incidents like when she dried the lettuce for the salad on paper towels. The salad was good but, what's this? Is this paper towel in my salad? Yep. We sure laughed over that one. Pass the paper towel salad please.

00dozo said…
Ha! I think we've all done that before. You put something away "in a safe place" and, yep, there it is, safe: safely away from ever finding it again!

nonamedufus said…
00dozo: Just funny the near blind one among us found it! Speaking of which the font size was small in my previous posts because I created the posts in my Mac "documents" and then cut and pasted to Blogger. For this one I highlighted and clicked normal font. The spacing kinda sucks though. Did you have to use your glasses for the previous ones? Were you able to find them?
13 January 2011 at 12:15

Donnie said…
Hope by now that y'all have located the charger that went astray. Well, paper salads aside and besides obviously having fun, those are some really great pics that you are posting.
13 January 2011 at 13:19

Venom said…
I absolutely have CRAFT.

nonamedufus said…
Venom: yeah there's a lot if it going around, particularly those among my generation. Good to see you agin, by the way. Maybe you had CRAFB? (Can't Remember A Fuchin' Blog - ;))
13 January 2011 at 13:50

00dozo said…
The sad thing is is that I always need to wear glasses for reading. Up until I was about 35ish, I was good. Now - well, lets just say I wish they still made Coke bottles.
;-)

Hey I just looked at my Live Traffic Feed thingy and I had a visitor from Panama! I hope they enjoy my posts.
13 January 2011 at 18:04

K A B L O O E Y said…
Hola, dufus! I just mentioned you in a post today, btw. I love those pictures and wish they came with the sound of the fury. As a lifetime member of the cult of the CRAFTy, I feel your BIL's pain. Good going, maman. What, did she step on it?
13 January 2011 at 21:51

Anonymous said…
Finally! A CRAFT I excel in!

I have YOU to thank for helping me see the cup half-full once again!

nonamedufus said…
KABLOOEY: Hey, thanks. Gone but not forgotten, eh. Funny how so many of us who live through the age of aquarius are now living the age of craft. That surf was wild for a couple of days but things are back to normal now.
14 January 2011 at 07:38

nonamedufus said…
Quirks: Come to me for counselling anytime. Maybe we could start a CRAFTA...Can't Remember A Fucking Thing Anonymous. "Hello, I'm Quirkyloon and I can't..."
14 January 2011 at 07:40

Shawn said…
When I got home from work today it took me 20 minutes to find my cell phone charger. Can you give me your mother-in-law's number just in case I misplace it again?
14 January 2011 at 19:28

nonamedufus said…
stefani: It really was something amazing to see. The beach is beautiful, big waves or not.
15 January 2011 at 06:47