January 23, 2011
Well, one more day to go in golf heaven, otherwise known as Orlando Florida. It's been great getting together with my brothers Whitey and Killer, spending some quality time with them. Of course I'm talking about golfing, not drinking. Although, we've done a bit of that too.
Last week we had a great time one night after having had dinner at the Flying Fish restaurant at Disney World. We strolled down the boardwalk to a place called Jellyrolls. Jellyrolls is a bar like no other I've seen. The entertainment is dueling piano players who take requests from the crowd. 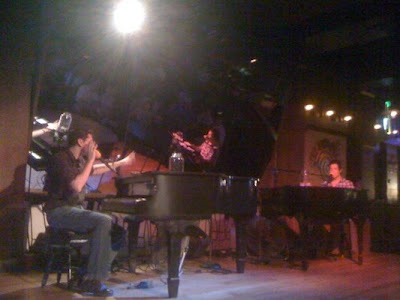 Dueling pianos.
Well, Killer, his wife, Whitey and I decided to send up requests for songs by Canadian artists - the Barenaked Ladies, Brian Adams, and the like. After about the second or third request one of the piano players said to the crowd "Looks like we have some Canadians in the audience" whereupon we hooted and hollared. So the guy starts playing the Canadian anthem. Well we'd been having a few silly pops by then so we sprang to our feet with our hands over our hearts and belted out the words. Ah, we did our nation proud. Well that's my recollection, anyway.
But it's been a fun week, spent mostly golfing. After only five weeks of golfing under my belt I'm no expert, but I'm having lots of fun. After such a short time I can honestly say I'm particularly proud of my practice swings 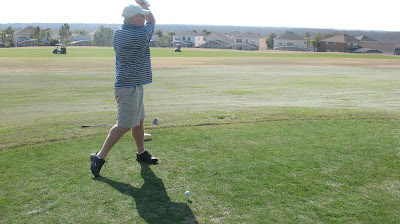 Look at that form. Too bad the ball's still on the tee.
Usually, after 18 holes of golf we have to "get ice". Killer has a tub outside where we keep the beer. So every day we have to "get ice". But you see "get ice" is a euphemism for stopping off for a few beers at Sundays, a nearby British pub, next to Publix, where we actually get the ice. The day before I arrived Killer and Whitey went to "get ice" and had so much fun at Sundays they forgot the ice. Luckily, since then they've had me to remind them to actually get the ice. One afternoon we spent so much time "getting ice" we actually bought flowers for Killer's wife so she wouldn't be mad at us. That woman's a saint for putting up with us. Whitey says he's gonna get us all T-shirts that read "I Survived The Ice Store of 2011". Whitey's such a card. Especially after a couple of Coronas. 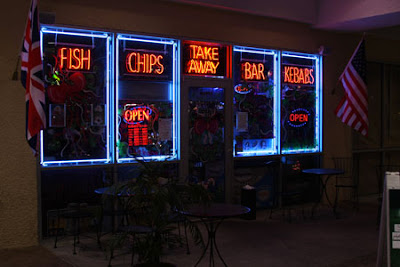 The "ice store".
Well, it's been a great week and I'll be sorry to see it come to an end. Oops, gotta go. My brothers are telling me we gotta go get ice.

Anonymous said…
I admit we get a lot of ice here in AZ. I can't make enough in the freezer to keep up with the demand, since it's hotter than hell here (even in the winter *grin*), but somehow I don't think YOU are talking about the same ice-cubes I'M talking about.

nonamedufus said…
Quirks: It was about 60 degrees here today and sunny. Made for a nice day out on the golf course. But now we're getting thirsty and we've run out of ice. I guess you know what comes next...
24 January 2011 at 15:07

Nicky said…
I'm curious, if your brothers' nicknames are Whitey and Killer, what's yours?

And nice job on representing Canada! I would have loved to have heard your (drunken) rendition of our national anthem. Did you sing it in both official languages? :-)
24 January 2011 at 17:44

00dozo said…
I'm glad the weather in Florida held out for you for your golfing experience.

Unfortunately, you will be returning to the Ye Olde Ice Shoppe that is known as Canada.

nonamedufus said…
Nicky: But I'm noname. And by the way, I'm thinking of christening Killer as Sir Drinks A Lot. It's funny when we reached the part where it switches to French I yelled out "and here's where we usually forget the words".
24 January 2011 at 23:10

IWASNTBLOGGEDYESTERDAY said…
reminds me of Bali ..and Asutralians..the anthem is the song "the land down under"
26 January 2011 at 08:40

brookeamanda said…
I'm still jealous because you're STILL in warm weather escaping the agony known as winter!
26 January 2011 at 09:55

nonamedufus said…
IWBY: Well we sang equally loud to The Summer of 69 by Brian Admas and If I Had a Million Dollars by the Barenaked Ladies. At least we knew the words to those songs because we muffed Oh Canada.
26 January 2011 at 11:28

nonamedufus said…
brookeamanda: Not any more. Got back last night. Went from 40C in Panama to 20C in Orlando to -10C here in Ottawa. And I've developed a friggin' cold. Welcome back to the Great White North, eh?
26 January 2011 at 11:31

Kelly said…
When I was in high school and my friends and I wanted to light one up, we'd tell my parents (who really didn't care) that we needed to go out in the backyard and roll up the hose.

Didn't want that hose to cause someone to trip because it wasn't rolled properly, doncha know.
27 January 2011 at 00:39

nonamedufus said…
Kelly: Oh, that's a good one. I remember secretly meeting up with a girlfriend in high school and telling my parents I was going for math tutoring. Took my math book too.
27 January 2011 at 08:18