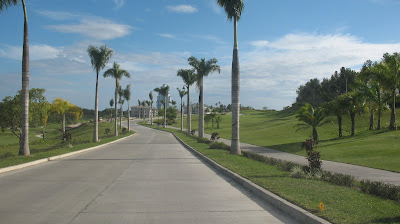 Part of my rationale for a month's sojourn to Panama was to put those 3 golf lessons I took back in September to good use and finally play some golf. Mrs D and her aunt - Tante Poutine (her name is Jeanne but I call her poutine because she comes from Warwick, Quebec, the undisputed poutine capital of Canada) - hung out for two weeks and then headed back to cooler climes. -10 to -20C in Canada these days. Masochists! No, not really. Eskimos, maybe. For me this is a dream vacation. The best of both worlds. Two weeks in this Central American paradise with the wife, two weeks without her AND four weeks of golf. After all I have to hone my skills before I meet up with Whitey and Killer, the other Dufus dudes, for a fifth week in Orlando. Wait a minute. Bonus. Three weeks without the wife! I miss you honey. Heh, heh, heh, heh.

So that's my plan. Practice golf for four weeks so I can show my brothers a thing or two.

Luckily my brother-in-law's condo community has a golf course. My first game wasn't too bad. Remember, I've never golfed before. I hit a 57! Of course the course (see what I just did there?) at the Bijao (pronounced be-how) Resort is only 9 holes. But hey, what do you want for the first time. I had a blast. I even scored better than my 11 year old nephew. Hey, he's good! 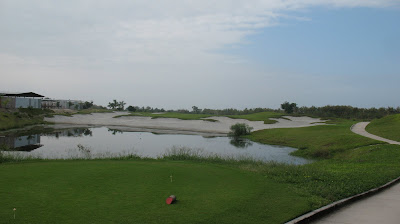 I made some shots I was proud of. Mostly I made shots I wasn't very proud of at all. I seem to have an affinity for water and sand. But hey, after all, this is Panama. Panama's all about water and sand. One hole in particular was memorable. I addressed the ball. I drove for all I was worth and ka-ping my ball made a beeline for a short stone wall, bounced off onto the sandy ground beside a water trap. Ha, I thought, I could play that. Not as optimistic as I was, my brother-in-law suggested I take the stroke and use my ball retriever instead. Down I climbed near the water to get my ball. I took two steps…and immediately began to sink into the sandy mud. Shit, I thought, quicksand! My mind raced wildly with visions of those classic western movies were the cowboy wanders unknowingly into quicksand and sinks quickly to his waist before lassoing the saddle on his trusty steed and being pulled to safety as the dramatic soundtrack swells. I could hear the soundtrack swelling in my head and I sure didn't have a lasso, let alone a trusty steed. Luckily I was able to extricate first one foot and then the other before the mud had reached my mid-calfs. Boy, that sure was a different take on a sand trap! 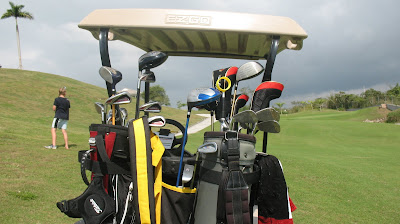 One last thing, as I continue to hone my skills. Apart from a driver for teeing off, I pretty much stick to a 7 iron on the fairway and a putter, of course, on the green. This moved my brother-in-law to wonder aloud why I'd spent so much money on my golf set because I never use the other 12 clubs. What with all the balls I've lost so far, he's got a good point. I could have spent that money on more balls!

http://howtobecomeacatladywithoutthecats.blogspot.com said…
Quicksand! Where's the trusty steed when you need one? (I think I'll just play through while you work your way out of that trap.)
11 January 2011 at 08:16

00dozo said…
You think you need a little more practice before you go to the "show" in Orlando? Bring some waders, just in case.
;-)

nonamedufus said…
Boom Boom: It made for an hilarious moment - from my brother-in-law's perspective!
11 January 2011 at 11:19

Canadian Blend said…
It's nice you call her Tante Poutine because she's from Warwick and not because she's likely to cause a heart attack of you spend too much time with her.
11 January 2011 at 11:41

nonamedufus said…
Cdn, Blend: No fear of a heart attack but the dear woman loves to talk. She in French, me in English. We have a great time. I must say, I feel a little like Van Gogh. She talks my ear off.
11 January 2011 at 12:23

Linda said…
Wonderful reading. I have enjoyed your travelogue immensely. Sounds like had a great time.
11 January 2011 at 13:35

00dozo said…
Depending on when you arrive in Orlando, the upcoming week (starting Saturday) is supposed to be in the mid 20'sC. Good temps for golfing!

nonamedufus said…
Linda: Thanks. I appreciate that. You know at first I had no intentions of blogging for the 5 weeks I'd be away...but I couldn't resist. And I AM having a great time.
11 January 2011 at 17:05

nonamedufus said…
00dozo: Well that's encouraging and better than I expected. My brother-in-law and I went to the course in Panama today because it's usually closed Mondays. Turns out it was a holiday weekend in Panama and they were open Monday, but closed today. Really stuck a "wedge" in our plans. Go figure.
11 January 2011 at 17:08

Linda Medrano said…
It sounds like fun except the quicksand part. That's always been one of my biggest fears, right up there with tidal waves.
11 January 2011 at 17:52

nonamedufus said…
Linda: Funny you should say that. While calm now we had huge waves here for about three days in a row. The water was really high, wiping out the little thatched-grass umbrellas on the beach. I'll have some pics later in the week.
11 January 2011 at 19:20

Donnie said…
Glad you're having such a great time. Hope that you may learn a bit more French from your friend.
12 January 2011 at 12:56

nonamedufus said…
Don: Tante Poutine is gone. But I try and keep up with my French speaking mother-in-law as we share "happy hour" together late each afternoon. I find the more I drink the better I speak French!
12 January 2011 at 13:26

Anonymous said…
You should scoop up some of that quicksand and then....Craigslist!

That's where it's all at, my friend!

Well apparently "it's" all in Panama as well.

And avid golfer. I should've known.

nonamedufus said…
Quirks: Turns out the water rose and the quicksand's back where it belongs...below the surface. Avid golfer? Maybe. Accomplished golfer? Not so much. Hey, I only started since I've been down here. It's fun and it's something to keep me out of trouble...providing I don't run into any more quicksand.
14 January 2011 at 07:34